Profile of Glen Keane
Page 1 of 2 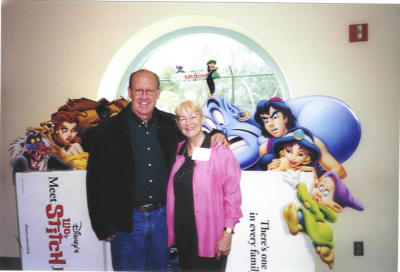 I first met Glen Keane, who is one of the top animators in the world today, at the Tribute to Marc Davis, which was held at the Academy of Motion Pictures Arts and Sciences in early 2000. I requested an interview with him, which he agreed to do. Over the next two years I kept in touch and finally, over breakfast at the ABC Commissary, we had our interview. Glen impressed me with his assurance and his flair for comedy. He is a tall attractive Irish man with a strong resemblance to the famous actor, Gene Hackman.

Glen inherited his Irish looks from his father, who is of Irish background, while his mother is from Australia and is of Welsh background. He was born in Abington, PA, outside of Philadelphia, on April 13, 1954, the middle child of five. His family had a house in between the homes of two uncles and there were about thirty red headed Irish kids in his extended family group. When Glen was five years old, his father moved the family to Phoenix, Arizona. because of his hay fever. Glen’s father, Bil Keane, is the creator of the comic strip “Family Circus” and everyone in the family drew. His senior year in high school Glen was torn between college football and art. As he couldn’t bear the thought of not drawing. which would be like not breathing, he chose art. Glen and his father journeyed to Los Angeles over Easter weekend with Glen’s portfolio to turn into Cal Institute of Arts for application to become a student there. Unfortunately, the school administration office was closed but they saw a hippy looking guy passing by and asked if he was a student, which he was. Glen’s father handed over the portfolio and asked if the student would turn in the portfolio for them. The response they received was “Yeah man, okay sure”, which made Glen wonder if the student was stoned and if his portfolio would really be turned in.

Two months passed before he had his answer. As Glen put it, “Finally I got this letter from the school saying that I had been accepted to the School of Film Graphics. 'What? What is film graphics? I want to paint. I don‘t want to operate cameras,' because it sounded like film cameras and photography. So I called the school and said 'I don’t want to do that, I want to be a painter, an artist.' The response was 'Well, sorry, this is the school you’ve been accepted into. You’ve got to do that if you want to come here. You could take a second major and go into painting.' Glen said 'Okay, I’ll do a second major in painting and do this stupid film graphics, whatever that is.' And I got there and the first day in class, I walked in and saw these strange looking desks with these round things on them with pegs there and people sitting over their drawings. I said what the heck is that. I was told those are our animation desks. Oh, film graphics, that is kind of an artistic, fancy way of saying cartoons. Cartoons, I’d never thought of doing that before but it wasn’t long before I found it was a combination of all the arts together. In this one art form you have music, you have drawing, you have painting, you have acting, you have film, color, everything is in one. and I just fell in love with that. I felt that this was what I was born to do and I never planned it, it was a gift.”

After two years there was a visit to the school from some Disney artists which included the Legendary artists Frank Thomas and Ollie Johnson, along with the newer Disney artists, such as Andy Gaskill, Don Bluth, John Pomeroy and others. Glen was stimulated and enthused by seeing that the characters they created had weight and life even though they were just rough, loose drafts and he also saw that they drew like he did. He decided to apply for a job at Walt Disney Studios and took a carefully prepared portfolio in for consideration. Nervously he watched and agonized as Eric Larson, one of the Nine Old Men, flipped through his work. One of his sketches that was discarded had taken him over three months to complete. In the middle of the portfolio Eric stopped at an ink sketch that had taken him only ten seconds to draw and examined it carefully before continuing to flip through the remainder of Glen’s work. He then returning to the one sketch that had caught his attention earlier. Eric asked if Glen could do more sketches like that one and Glen went off to the beach to do about 700 sketches before he returned to Eric. Eric, who took those to the Board which included both Frank and Ollie, among others, for review, kept only 10 per 100. They gave him four weeks to complete an assignment and then another four weeks to complete another assignment. Glen was thrilled to be finally accepted into the program.