by Rhett Wickham (archives)
May 7, 2002
Rhett looks at the book Walt Disney's Nine Old Men & The Art of Animation and talks to the book's author, John Canemaker. 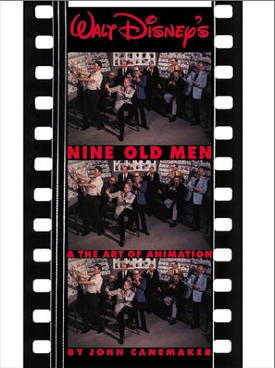 "I love believing in these characters and their lives. I love all the things that animation can do in all its different styles. There isn’t anything it can’t do, or say. I love the definition ‘a drawing come to life.’ I just love it all!"

So gentle in his demeanor that he almost whispers his sentences, folded gently into the squat and oh-so rigid chair opposite me, is a very tall and deceptively shy middle-aged man with salt and pepper hair, gesturing with his hands more like a reluctant orchestra conductor than a writer and lecturer. His enthusiasm and the way he reaches out into mid air to wrap his fingers around each word as it escapes reveal that he is a master animator himself. His lips pressed in an eager smile and filled with excitement on the subject, he reminds me of Josh Baskin, the 12 year old hero played by Tom Hanks in "Big" who suddenly finds himself in an adult body. This "gangly youth" - as Robin Hood's Prince John might say - is arguably the most articulate and passionate fan animation has or ever will have. And he is certainly its most accomplished and prolific chronicler and historian. He is John Canemaker.

John Canemaker has written eight books on the subject of animation, and he is at work on his ninth - a biography of Disney artist Mary Blair that he will deliver to Disney Press in the fall of 2003. We are meeting to talk about his latest book, Walt Disney’s Nine Old Men and the Art of Animation (Disney Editions, October 2001.) Canemaker is a full professor and head of the animation program in the film school at NYU's Tisch School of the Arts, and currently acting as Interim Chair. The afternoon sun filtered through the horizontal blinds hanging over the windows of his office stripes the room with amber, and casts thin shadowy lines across shelves of video tapes, toys, posters, maquettes and figurines like ruled lines in a composition book. As he welcomes me into the room (a scene just waiting to be storyboarded as yours truly stands a unkempt, stout 5 foot 2 inches under my host’s more gamin and lanky six foot plus presence) he gestures to the beautiful Italian one sheet of Fantasia pinned to the wall. "It was the first thing I hung when I moved into this office," he beams, raising his eyebrows and gently smiling in a signature grin as if pinching in some delicious secret.

Canemaker is as charming, warm, and welcoming as his temporary ninth floor digs overlooking the corner of Broadway and Waverly Place. We sit, or rather I plotz while he folds nimbly like a cheerful father into his son’s desk chair during a parent-teacher conference. Sitting on the table between us is a two-foot-tall articulated Iron Giant from the Warner Brothers animated feature of the same name. "Do you have this one?!" He asks, reaching out with one finger to shake hands with our silent observer. I confess that I do, and that I had my partner comb the Warner Brothers stores for every available toy from the film. We both agree that the toys for this film were great fun - like a couple of kids buzzed with the excitement of the latest action figure purchased with our hard-earned allowances. Just as quickly, we sink into a mutual commiseration over the sad lack of marketing enthusiasm for the film on Warner Brothers’ part. I say how equally sad it was that they didn’t know what to do with Mark Dindal’s delightful valentine to Hollywood, Cats Don’t Dance, and how Disney seemed to fail Dindal’s hysterical Emperor’s New Groove. He agrees with my belief that both Dindal and his producer partner at Disney, Randy Fullmer, have positively impacted animation (the pair are now at work on the fully CG animated Chicken Little for Disney.) No doubt, had I met John Canemaker when I was in fourth grade versus in my fourth decade I would have declared him "my new best friend." Clearly, he loves all things animated.