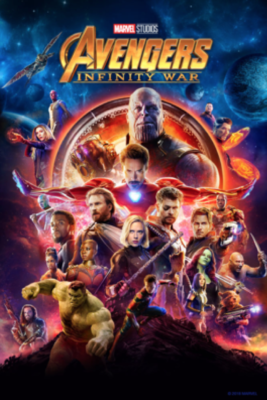 Avengers: Infinity War dominated the worldwide box office and gave new meaning to the phrase “Oh snap!” Now you can watch it whenever, wherever you’d like with the Digital HD release, now available from all major providers. With so many characters and eighteen films leading into this blockbuster, fans will want to watch it again and again to try and catch every detail.

As Doctor Strange says, “The fate of the universe is at stake.” Thanos becomes an unstoppable force and he continues to collect Infinity Stones, several of which are on Earth. Not only does it require the Avengers to assemble, but they must also partner with unlikely teammates from Wakanda and space.

The Russo Brothers returned to direct this juggernaut after proving that they could make sense of a film with too many characters with Captain America: Civil War. Once again, a film that should have gone off the rails due to the sheer size of its cast is kept on track and with excellent flow thanks to these creative masterminds.

Iron Man, Captain America, Thor, Black Panther, Bruce Banner, Doctor Strange, Black Widow, Hawkeye, Scarlet Witch, Vision, Spider-Man, and the Guardians osf the Galaxy all come together in their quest to stop the unstoppable Thanos. The list of characters from the MCU that aren’t in this film is shorter than the list of those that are, but it impressively never loses track of the main thruline. If it has a fault, it’s that it’s the first of a two-part story and the cliffhanger ending makes it feel like an incomplete experience.

With hours of bonus features, including some digital exclusives, fans won’t want to wait two weeks for the physical release on August 13th. The film is available on Digital HD from a plethora of providers, including iTunes, and those looking for 4K can obtain it through Vudu if they have a compatible device to stream it through. While a streaming copy doesn’t come close to the file size and richness of detail as the on-disc counterpart, it’s still a satisfying home video experience for the eager fan.

The following bonus features were experienced through the iTunes digital copy.

Streamed in 1080p through an Apple TV, Avengers: Infinity War offers a satisfying digital presentation. The majority of shots feature Blu-Ray-like detail and color spectrums. Where the digital copy loses points is during the fast action shots, where details feel diluted when compared to their HD disc equivalent.

The primary audio mix is a 5.1 Dolby Digital mix that makes full use of the sound spectrum, enveloping the audience in their home theater. The Blu-Ray’s 7.1 DTS-HDMA mix offers a richer experience, but the 5.1 mix does not disappoint. Other audio options with the digital copy include stereo Spanish and French.

Avengers: Infinity War arrives on Digital HD with some worthwhile bonus features that explore the making-of process and celebrate ten years of Marvel Studios. Nearly all of the contents will be available on Blu-Ray on August 13th, but super fans have a two-week edge with this digital release, including some exclusives.

Get a sneak peek at the upcoming Blu-Ray release in our unboxing video.