Star Wars and Disney theme park fans were treated to the big news they’ve been waiting for this week as Disney announced opening dates for both Disneyland and Walt Disney World’s version of Star Wars: Galaxy’s Edge. But even better news came later on Thursday when ABC released new drone footage actually shot inside the highly anticipated Star Wars themed land. We’ve gone through the video and pulled a number of frames highlighting some of the incredible details Walt Disney Imagineering has put into Galaxy’s Edge.

For everything we know so far about Star Wars: Galaxy’s Edge including videos, pictures, historical articles and more, visit:

Below, explore our gallery of still frames taken from the video above. Each image is partnered with a caption explaining our best guess as to what exactly we’re looking at within the confines of Black Spire Outpost on the planet Batuu, the in-universe setting for Star Wars: Galaxy’s Edge. 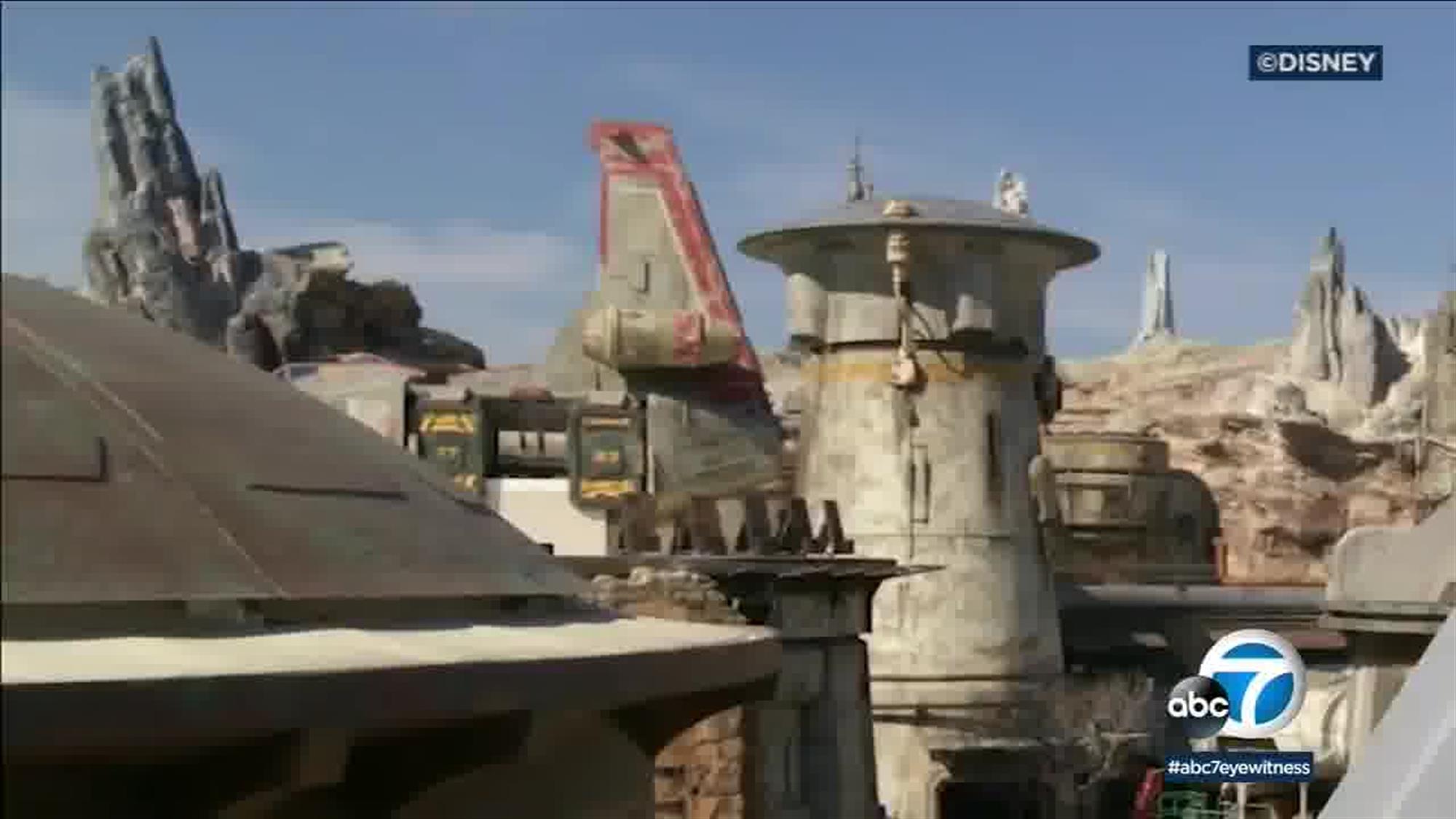 Cookie’s food shuttle, parked on a landing platform atop Docking Bay 7, has the numbers “77” and “83” emblazoned on the side, referencing the release dates of the original Star Wars trilogy. A large turret reminiscent of those used by the Rebel Alliance on Hoth guards Black Spire Outpost against any potential unwanted visitors approaching from the skies above. The Incom T-70 X-Wing Starfighter used by the Resistance is a bit sleeker than the T-65 models used by the Rebels during the Galactic Civil War, but they serve the same purpose as a maneuverable combat craft. Strange markings line the exterior walls of Black Spire Outpost’s buildings. Is this some kind of local language or simply decoration? The legendary freighter the Millennium Falcon is docked at the central focal point of Batuu, just outside the entrance to the Smuggler’s run attraction. Black Spire Outpost is named after the mysterious petrified tree structure that forms its core, but other large spires loom in the distance, giving a sense of depth and size to Batuu. 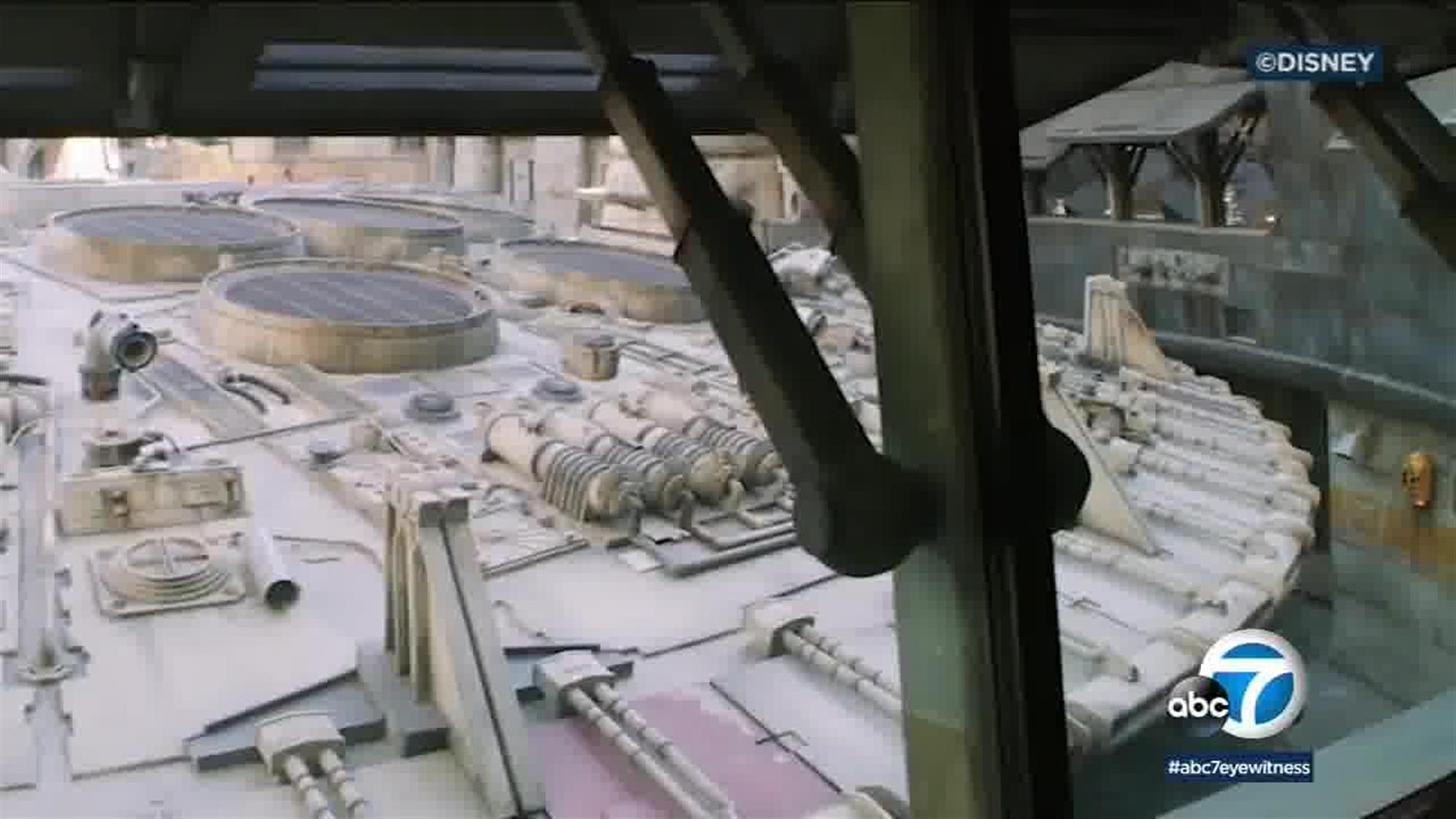 The back side of the Millennium Falcon will be visible from the Smuggler’s Run queue, as guests prepare to board the ship that once belonged to Lando Calrissian, then Han Solo, then Rey. The Millennium Falcon’s interior is screen accurate down to the last detail, including the ladders that go up (and down) to the ship’s two gunner stations One of the most famous and memorable scenes in the original Star Wars movie takes place in this section of the Falcon’s living quarters, which features a Dejarik (or Holochess) board for the crew’s recreation. Another view of the detail that has gone into realizing this full-scale replica of the Millennium Falcon’s exterior. These gizmos on one of the ship’s forward mandibles could be responsible for any number of the ship’s many functions. Poe Dameron’s X-Wing is uniquely colored from the rest of his fighter squadron. Why is Poe on Batuu? We’ll probably find out in the Rise of the Resistance attraction, which will open later in the year than the rest of Galaxy’s Edge. This sure looks like Luke’s X-34 SoroSuub Landspeeder, meaning it’s one of the few vehicles from the original Star Wars trilogy to be built full-scale for Galaxy’s Edge. Whether it’s meant to represent the same one Luke sold to the Vuvrian Wioslea back on Tatooine (or simply another speeder of the same model) remains to be seen. This will be an average guest’s view as they approach the Millennium Falcon: Smuggler’s Run attraction at Galaxy’s Edge. Or if you want to make the same joke that’s been made a thousand times already on social media, you could Photoshop in a crowded sea of tourists to make the view more accurate. Though we’re less than three months away from the officially announced opening day, there’s still some scaffolding up as workers put the finishing touches on Star Wars: Galaxy’s Edge at Disneyland. What looks like a giant, rotting engine from a Star Destroyer or other large capital ship disguises an access point to an abandoned Rebel base on Batuu, and what will eventually serve as the entrance to the Star Wars: Rise of the Resistance attraction. 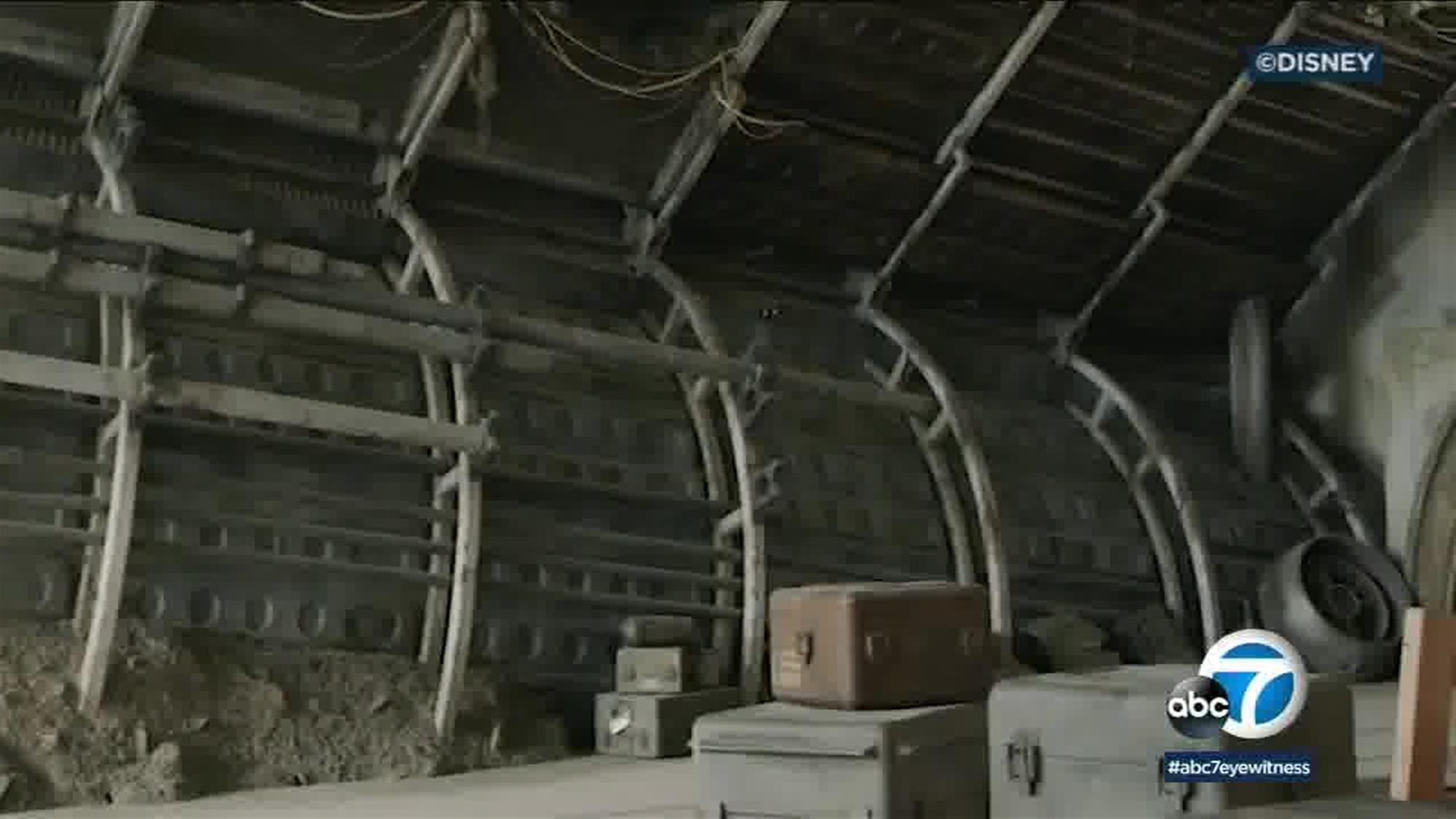 Cargo crates and other discarded engine parts help contribute to the lived-in feeling that Star Wars is so famous for. Black Spire’s open-air Marketplace will be home to a variety of shops for visitors looking to take home toys, creatures, and apparel, or even grab a quick snack from A Galaxy Far, Far Away. A large capsule resembling a pod racer engine, which is rumored to appear in the queue for one of the attractions. We’ll have to wait until the end of May to find out for sure!

Star Wars: Galaxy’s Edge is officially set to welcome guests on Friday, May 31 at Disneyland in Anaheim, California and Thursday, August 29 in Disney’s Hollywood Studios at Walt Disney World in Florida. As we continue to approach these exciting dates, check back here at Laughing Place for regular, thorough coverage of all the news and events leading up to the grand openings at both resorts.