Freeform’s 30 Days of Disney’s Singalong Week continues tonight with a singalong version of Beauty and the Beast. (The original version, of course because I like to forget that the new one exists.) A few days ago, I got the chance to rewatch Beauty and the Beast in theaters as part of the Dream Big, Princess initiative, and what an experience that was. The movie was released before I was born and I never got the chance to see any of the rereleases, so it was a magical experience to finally be able to see one of my favorite films on the big screen.

I may have been late to the ball catching the film in theaters now, but when the film was released, it was a smash with both general audiences and critics. Beauty and the Beast finished the year as the third-highest grossing movie domestically and the second-highest worldwide, which is pretty amazing for an animated film. But what is more impressive is that the film was nominated for six Academy Awards, a feat that has never been matched by any other animated film ever. But digging deeper, Beauty and the Beast became the first animated film to be nominated for Best Picture, and the only one ever nominated with just five nominees. So basically, the film was a juggernaut that was firing on every cylinder imaginable. With all of this success and then-CEO Michael Eisner’s push to reinvigorate the parks, you would have thought that the huge success of the film would lead to countless experiences in the parks. However, we got Beauty and the Beast Live on Stage. Sure, it appeared at Disneyland, Walt Disney World and Disneyland Paris, but a stage show was the only major way that this gigantic success was represented in the parks? Something seemed off, especially in Paris because the whole movie is set in France and yet it had no real representation. With the park failing at its outset, you’d think they would have tried to fast track an attraction into the area.

Unlike almost all of the Disney Renaissance films after it, Beauty and the Beast didn’t get its own parade, and even in the parades it was in, it was more common to see Belle and the Beast with a group of princes and princesses than to have an entire float dedicated to them. The film is almost perceived as a “higher art,” but even so it feels odd to see The Little Mermaid and The Lion King get their own floats all the time and yet we just got Belle waving. 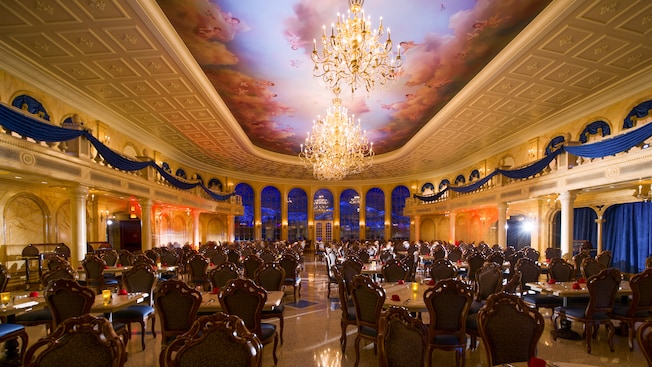 But in 2012, the tide finally began to turn with the addition of Be Our Guest to the Magic Kingdom. At last, Beauty and the Beast was getting the love in the parks that it deserved. With the additions of Enchanted Tales with Belle and Gaston’s Tavern, there is a fully-fledged mini-land in Fantasyland that gives guests a chance to try the grey stuff (it is delicious) and meet Belle in Maurice’s Cottage. It took a little over 20 years, but it was well worth the wait because the area is a truly quaint addition that brings new life to Fantasyland. Luckily for us, Magic Kingdom doesn’t get to have all the fun as a new attraction based on the film is coming to Tokyo Disneyland on April 15, 2020. I’ll be there during the summer of 2020, so I should be lucky enough to get to experience the attraction when I visit because being able to be thrown into the middle of one of my favorite films, while on a trackless ride vehicle is going to be a dream come true.

So what took the movie so long to build a park presence? Well, for starters, except in extreme cases like Frozen, generally Imagineering will take its time to adapt a film into a major attraction. Even The Lion King, arguably the most popular animated film of all-time, still only really has The Festival of the Lion King to claim as a major attraction. These things take time, but considering how The Little Mermaid and Aladdin both got full lands and attractions before Beauty and the Beast, it is still a bit surprising that it took the latter so long. I think it does come back to the fact that Beauty and the Beast can be seen as higher class and therefore harder to adapt because it needs to be done near perfectly.

That all said, I’m certainly glad that we are finally getting attractions based on this amazing film. (Here’s hoping that a clone of the Tokyo Disneyland ride comes to Disneyland and replaces Autopia sometime soon.)

Beauty and the Beast airs at 7:50 PM this evening on Freeform, and the basic cable channel’s 30 Days of Disney programming block runs throughout the month of September. It will also be available on Disney+ when the streaming service launches on November 12.