We’re drawing closer to the Day of Unity on The Owl House, and Eda and Lilith are still without a plan, and between King’s confusion and Luz’s overeagerness, is all hope for the Boiling Isles lost? 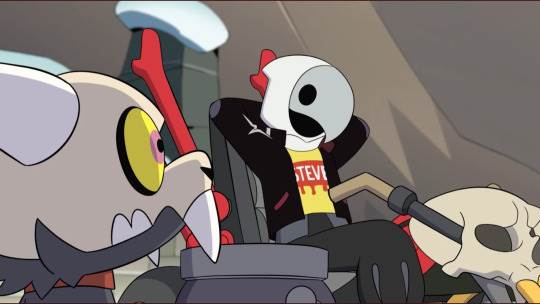 O Titan, Where Art Thou

The episode begins with King —-dreaming?— in a place we’ve only seen in the previous episode, “Yesterday’s Lie,” when the Luz attempted to build a portal back to the human world but only got it partially right. However, this time it’s a little more terrifying as King can hear who we know to be the collector off in the distance saying how they won’t be alone anymore. King wakes up and Luz tells them they’re back in Bonesborough, wrapping up their adventure from two weeks ago when we discovered that King was a titan.

As they arrive, they realize there are wanted posters everywhere, not just for the Owl Lady, but for them too. They see Coven guards and a carriage leaving the Owl House with all their belongings, including Francois. The Owl House is completely ransacked and empty, save for a journal entry that points at a knee and says “pain here” which thanks to a little bit of magic is revealed to be a clue showing off where Eda and Lilith are hiding.

They’re there alright, and Lilith and Eda are working on plans to stop Belos to no avail. Luz, King, and Hooty catch up with them and catch them up on their adventures on the other side of the world, revealing that King is in fact a titan himself. Eda and Lilith are stunned and excited, but Lilith wonders…is he a gentle god or an angry god?

Meanwhile, Luz is pondering what Eda and Lilith are going to do to stop Belos, but again, they have no plan. Eda just wants to give Luz and King one nice day before everything gets crazy. And Lilith is groveling and acting strangely in a new way of worshiping King. What does Luz want to do though, is go on a crazy heist adventure and save Francois the plush toy to cheer up King, who has been down since they arrived back in Bonesborough. When Eda asks if she just wants a beach day instead, arguably one of the best lines in the series (especially if you know some of the behind-the-scenes drama of the show) comes out of Luz’s mouth when she says “Well maybe if we had time for 20 more adventures, but we don’t.”

They track down Francois but Eda reinforces that there are no mistakes this time since Belos is out for Luz now too, considering her recent trip into his mind. While there at the precinct, they gain access to the warehouse and Luz sets out to find Francois, and a box labeled “Eda’s Longest Toenails.” In the warehouse, Eda overhears a captain explaining that they cleared out the Owl Lady’s house, but she was nowhere to be found. It is revealed that the captain is talking to Head Witch Raine Whispers, and Eda sets out to contact them. Successfully she does, and asks them if nothing else, to save her kids (Luz and King). Their conversation is cut short but Terra Snapdragon, but seemingly goes off without a hitch, with Raine adding that someone is on the way to pick up the package. Luz overhears this conversation and gets upset that Eda isn’t asking her to help, but rather sending her away, still only seeing her as a defenseless kid. Another guard overhears the fighting and while the two battle it out amongst themselves in the warehouse, get captured anyway.

Elsewhere, King is pondering life when he comes across Steve the Coven Scout (From Lilith’s party), who also appears to be pondering life. He has a sidecar and nowhere to be. King jumps in and wherever he points, Steve drives. Though it's worth noting that Steve is reading a book called “Synergy in The Emperor’s Coven” as King finds himself. Lilith and Hooty are tracking them though, since earlier the noticed King ran away. Together, King and Steve share some moments in a montage, helping stranded witches and adoring witch couples. Steve rips up portions of the book and even makes King a little paper doll. Eventually, Lilith and Hooty catch up to Steve and King and are immediately wary of his intentions, but it seems okay. Steve has taken off his mask and it seems that he has given up his position as a coven guard. King also cracks and tells Lilith to stop acting so weird around him, he’s still just King.

Luz and Eda, still captured, are being transported separately in windowless carriages. They arrive at their destination, and Luz is ready to fight. It’s okay though, Raine showed up with their support team, including Darius and others. Together, they call themselves the “Covens Against the Throne” or the “CATS,” much to Darius’ chagrin. In a private moment, Eda pulls out the box of toenail clippings, which is actually where she hid the palistrom wood so that together, they can carve Luz’s palisman.

This episode of The Owl House is now available on the Disney Channel and the DisneyNOW app. You can catch up with past seasons and previous episodes on Disney+.