Welcome back for another recap of Freeform’s Motherland: Fort Salem. This week the group splits up heading to California, Fort Salem and deeper into the Cession. Meanwhile, the Council’s failure to extradite the fugitives, leads President Silver to plan an invasion. 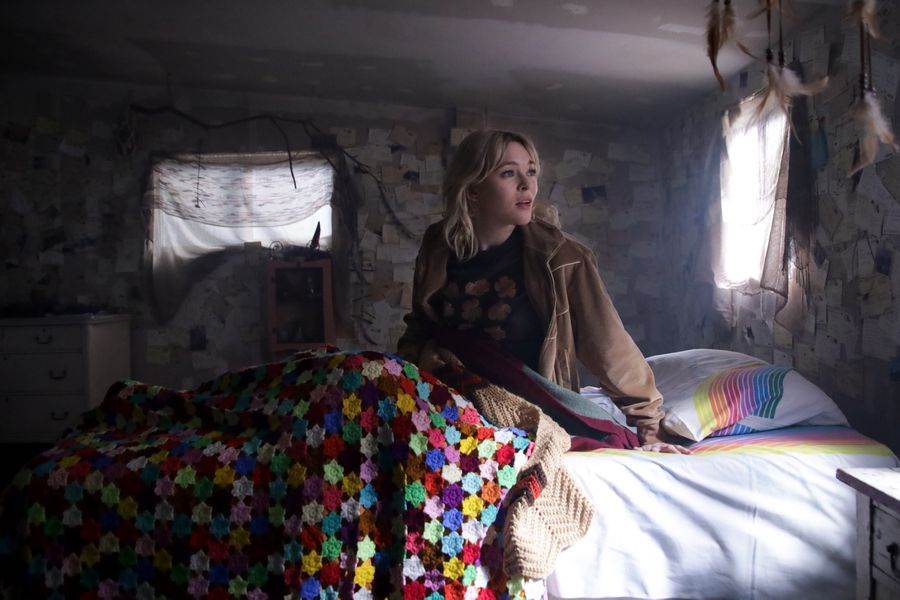 At the Liberty Trading Center in New York, President Silver (Victor Webster) and Kara Brant (Emilie Ullerup) are meeting with a group of executives. One of the gentlemen comments on the results of the genetic project rollout in California. It seems the collared witches actually feel a sense of freedom. Kara compares the experience to putting reptiles in cold water and before slowly raising the temperature. Suddenly, Alban Hearst (Bob Frazer) interrupts, and says the Witch Bomb is dead but Alder is alive…and stronger. Kara chides him for not starting with the good news: the Cession witches interfered with their investigation. They had the fugitives and didn’t extradite them meaning they broke the treaty. Silver says this paves the way for invasion, as long as they get congressional approval. Kara tells Herst that Alder’s power comes from the Mother, “Drown the mushroom, and make sure the bitch stays dead.”

Thelma Bearkiller (Olivia Lucas) needs to get Alder (Lyne Renee) to Fort Salem so the Mycelium can heal her. Tally (Jessica Sutton) decides she’s going to California to check on her mother, while Scylla’s (Amalia Holm) plan is to get Edwin somewhere safe. That leaves Abigail (Ashley Nicole Williams) and Adil (Tony Giroux) to travel with the others. Tally is still stressing about her vision, but Abigail says that Nicte filled her head with Spreen nonsense. Alder adds that she doesn’t know what Tally saw, but that everyone has a role to play. They agree to meet back in the Cession and the girls embrace. Tally says every goodbye feels like the last.

Over at Fort Salem, Petra (Catherine Lough Haggquist) asks Sterling (Luc Roderique) and Anacostia (Demetria Mckinney) for more information about the Camarilla Army they discovered. Ana believes there were at least a thousand troops at that facility. Because she’s bound by the Salem Accords, Petra will have to send her own troops to invade the Cession, but she notes, Silver is bound by the same rules. They’ll play along for now but the goal is to bring back President Wade.

Tally has made it to Sacramento and she’s hiding in a truck bed. As the driver approaches a stop sign, Tally observes a family of collared witches being questioned. The officers detain the father. Tally’s driver tells her things have gotten worse. They’re not supposed to harass identified witches. When she arrives at home there’s a strange car in the driveway and two men are having a discussion. She sneaks by and enters the house just moments before her mother and one of the men walks in. Her mother sees her but she avoids being caught. With the unwelcome company gone, Tally’s mother takes her collar off. Tally insists they should go to the Cession, but her mother hesitates. Tonight is Book Club.

Alder, Adil and Abigail sneak into Fort Salem where they see a group of Cadets training outside, knowingly being filmed by the Civilian Oversight Committee. Abigail says they are going to use the Army’s work against them and she’s surprised her mother would allow this. Alder says Petra is bound by the Salem Accords. Alder’s suddenly doubles over—they have to get her to the Mycelium.

Inside, Petra tells her officials where the fugitives were last spotted and orders them to move into the Cession. Colonel Jarrett interrupts, with his own orders. Any witches are to be collared and interrogated by his men. As he speaks, Petra telepathically speaks to her team telling them to disregard his order. She wants no bloodshed. Bring the Bellwether unit back alive.

Scylla and Edwin are in Cherokee Territory and he stops to fill up the car. A local sheriff arrives and greets Edwin in Cherokee, then comments that he’s driving a Council car. Edwin says he’s been hired as a driver for Thelma Bearkiller. Scylla emerges from the gas station and stands behind the sheriff, controlling his words. The sheriff leaves, but Edwin is not happy. That was a dangerous move, someone could have seen. Scylla asks why he’s upset. “You’re all I have left!” She tells him he has Raelle too. He wishes he could talk to his daughter. Scylla has an idea.

A chatty bunch of Book Club ladies arrive at the Craven’s, but before they go in they offer brownies to the agents staking out the house. One man is very receptive but the other says he’d never eat their food.

At Fort Salem, Izadora (Emilie Leclerc) and Penelope (Mellany Barros) are eating dinner and the elder witch comments on Pen’s progress saying “I’m very proud.” Just then Alder, Abigail and Adil appear begging for Izadora’s help. Abigail sees Penelope and says her name. She turns around and screams, “you tried to kill me!” Abigail asks if she’s real and does that mean they can clear their names? Izadora cautions against that, Penelope’s not yet fully human.

For the first time in forever, we catch up with Raelle (Taylor Hickson)! She’s in her bed when suddenly Scylla’s voice can be heard through a flower. They greet each other then Edwin says hi. Their exchange is short lived as Willa (Diana Pavlovska) walks in, and demands they leave Raelle alone. She destroys the flower, breaking the connection. Back on the surface, Edwin asks who interrupted the call. Quinn is with them now and she knows. They don’t need to reach Raelle, they need to talk to Willa. 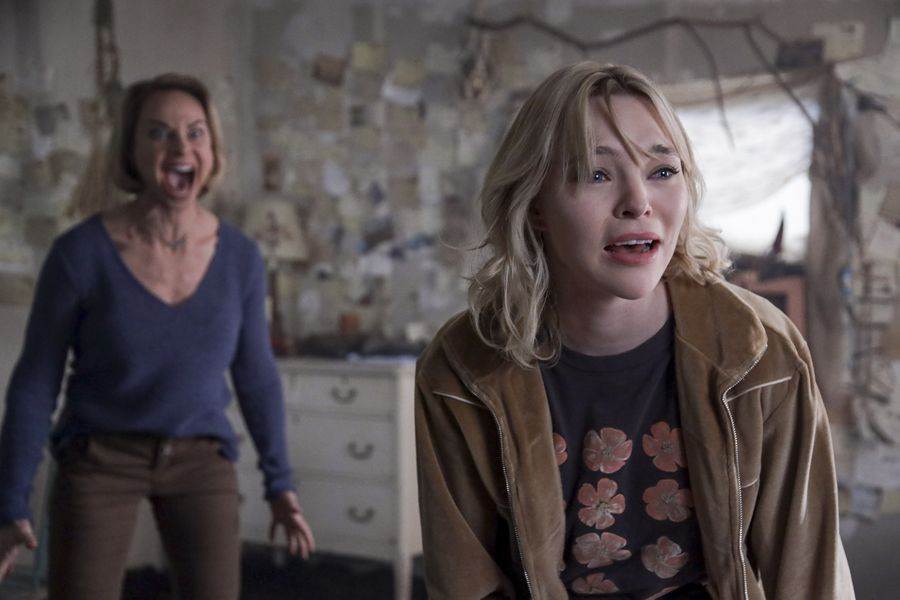 Alder finally makes it to the Mycelium wall. She turns to the others and says it’s time for her to go. She tells Adil that Khalida will be safe. Abigail asks her to bring Raelle back. Alder says, “I’ll do what I can.”

Tally discovers that the “Book Club” is actually a resistance group. Tonight they’re discussing raiding a government building to destroy witch ancestry records; and they’re ready to go. Tally cautions that it’s dangerous, but her mother says waiting around is not an option. Not wanting to let her mother go it alone, Tally reluctantly joins the group.

Scylla tells Edwin and Quinn the truth. She met Willa in the Spree, and her assignment was to get Raelle out of the Army. Willa actually died saving her daughter’s life. Quinn asks if Scylla knows Farspeech. She doesn’t. Quinn says back in the day, everyone in the Army learned. It’s tricky, but she and Willa used Farspeech for years, they’re imprinted on each other's minds.

Petra is called to the lab where Izadora and Anacostia are waiting. She asks what’s going on and just as Abigail and Adil reveal themselves. She embraces both of them. They discuss how President Wade left with the Marshal and how the Camarilla knew the group was in the Cession. Is there a mole on the Council? More importantly, what can they do about the invasion?

Quinn calls out to Willa, she responds that it's not a good time. But as they talk, Mycelium starts growing from the ceiling in Quinn’s house. The mushroom continues to extend until Willa appears. She says Raelle is safe and far from those who would harm her. She’s part of the change that was foretold years ago. Edwin stands next to her and grabs her hand. The couple has a moment and he says Raelle has a new family who can protect her. “We need to let her go so she can live it.” Scylla asks Willa to, “send her back to me or take me with you.” Without promising anything, Willa leaves.

The Book Club has made their way to the records room. Tally’s mother tells the group to grab the documents and they’ll burn them later. Tally, with her sight, will be on watch. The coast is clear and sees something worth showing her mom. The Craven women head to the basement where they find crates of new witch collars that won’t unlock. They burn them and head out to meet the others. At the van, Tally’s mother has become disheartened. Sure they destroyed these, but the government will just send more collars. “All we’ve done is slow them down.” Tally offers encouragement, “you win a war one battle at a time.” Her mother nods, and they drive away just as fire explodes in the building. Learning of the trouble downtown, the men staking out the Craven household rush inside only to find the Book Club in the living room chatting about the novel they read.

Now that she got Edwin to safety, Scylla is heading back to meet the others. Before they part ways, Edwin says he knows she’s done a lot for Raelle, but more importantly, he trusts Scylla and is not going to judge her for her past. She’s touched by his words and thanks him.

The next morning, Tally and her mom are washing dishes and bonding over their dangerous experience. Tally apologizes for the past and blaming her mother for everything. She knows now her mom only wanted to protect her. While they’ll be parting ways, her mother tells her to trust herself and get back in the fight.

Back in the Cession, Thelma and Anacostia watch on TV as President Silver makes a speech and signs an executive order to invade and occupy the territory. Thelma doesn’t know where President Wade or the Marshal are but she’s going to prepare for war. A group walks in and Ana is surprised. Thelma has an entire militia. She didn’t know who it would be or when they’d attack, but she’s been preparing for this day. She tells Ana they can stay or go, “but you have to choose right now.”

At an unknown drill site, a raging Willa runs and screams, turning two men into mushroom statues. Alder joins her and clarifies this is the last location. They’ve stopped the poisoning of the Mycelium and can focus on healing.

Fort Salem is buzzing. Alder is alive! Jarrett says it can’t be and Petra says she’s determined to find out if it’s true. A group of cadets has gathered in a circle stomping their feet in unison. Petra makes her way to the middle of the group and there’s Alder. The former general tells those gathered to “Have faith and fear not. This will always be a witch's place.” She grabs Petra’s arm, “do not lose hope.” She transforms into Mycelium and retreats into the ground.