Welcome to Extinct Attractions. This week, we’ll be going on a tour of one of the longest experiences that Disney has ever created in their parks. The Walt Disney Studios in Burbank, CA has been the spiritual center of the Walt Disney Company ever since it officially opened 80 years ago in 1940. Many other film studios in the area offer lengthy guided tours around their lots, but the Walt Disney Studios differs in that regard as its soundstages aren’t used extensively, with most of the activity coming from corporate and studio executives as opposed to actual production. However, when Michael Eisner was CEO, he wanted to bring that studio feel to life and decided that the best place to create it would be across the country at Walt Disney World where the residents weren’t used to being inundated by the entertainment experience. (Plus, he wanted to create a direct competitor to the similarly-themed park that Universal Studios was building in the area.) 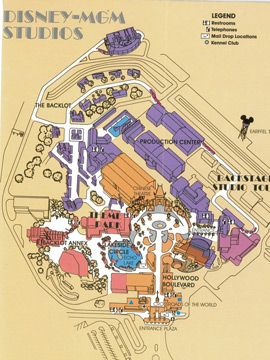 The Backstage Studio Tour opened with Disney-MGM Studios on May 1, 1989 as the headlining attraction of the entire park, especially fitting because that was back when the park was focused on teaching guests how films were made. As you can see from the picture above, the tour was almost considered an entire part of the park outside of the traditional theme park experience. Everything in purple was a part of the tour, with that area taking up pretty much half of the space. It was such a mammoth experience that it would take at least two hours and combined a walking tour with a tram tour. 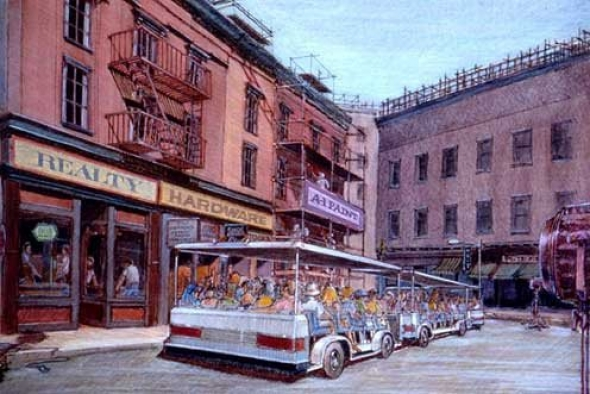 The guest experience would begin with the tram tour. Along this portion of the experience, guests would see costuming and the scenic shop, where cast members would create outfits and sets that would be used in various places around the Walt Disney World property. Moving forward, guests would drive through Residential Street, full of the exteriors of houses from shows like The Golden Girls, before taking in New York Street, also known as Streets of America. Finally, guests would endure Catastrophe Canyon, an experience that would simulate movie disasters. After all that fun, guests needed a break because there was still the walking part of the tour, but luckily there were bathrooms, shops and even a snack cart to tide people over before the second half of the journey. The first part of the walking tour was a demonstration of water special effects, with some “lucky” volunteers getting the chance to be a part of the scene. After that, guests could tour a special effects workshop and walk through the catwalks of a few different soundstages before ending up in a post production editing and audio studio that demonstrated the finishing touches of making movies. With your journey through the filmmaking process complete, your last stop on the tour was the Walt Disney Theater where there were sneak peeks of upcoming Disney releases.

I am extremely jealous of everyone who got the chance to experience the attraction as it was originally imagined. It was the perfect blend of Disney storytelling with an in-depth look at how films are made. I especially loved the order of the tour because their intentionality in how you experienced everything was spot on as you logically moved through the attraction in the same way filmmakers craft their movies.

Unfortunately, the number of guests who got to experience the original iteration was limited to a handful of people because within a year, the Backstage Studio Tour was already being parcelled into smaller and smaller bits. New York Street split off to become Streets of America, virtually unchanged but now guests could walk through it instead of having to experience it on the tour.

The Walt Disney Theater was next on the chopping block with Here Come the Muppets taking over the theater just over a year after the park opened. So within thirteen months of Disney-MGM Studios opening, two of the ten distinct parts of their headliner attraction had been repurposed or completely changed. 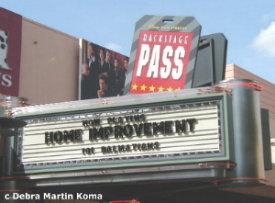 Just a few years later, the attraction was officially split into two parts, Backstage Pass and the Studio Backlot Tour, with the Studio Backlot Tour now appearing pretty similar to the version that most guests were familiar with. However, Backstage Pass was interesting because it combined the special effects shop with the soundstage experiences. Generally, the soundstages had some sets from Disney movies or TV shows like 101 Dalmatians or Home Improvement that guests could look at from the catwalks. By the time Backstage Pass emerged, it seems that the post production facilities for audio and editing had been repurposed, leaving us with seven out of ten parts of the tour still active in some capacity. By the mid 2000s, Backstage Pass closed, with its various pieces going on to become the homes of attractions like Who Wants to be a Millionaire – Play It, Journey into Narnia and Toy Story Mania. Bouncing back to the Studio Backlot Tour, everything remained pretty much unchanged for about ten years. Guests would see the water effects show as they queued up and then the line would wind through the prop house before hopping on the tram for Residential Street, Costuming, the scene shop and Catastrophe Canyon. But in 2004, construction began on Lights, Motors, Action and most of Residential Street was removed for the attraction, meaning we were down to four of the original ten parts of the tour. In 2008, they even eliminated the human element of the tour by replacing live tour guides with an automated system. Unfortunately, this version of the tour is the one that I, along with countless others, grew up with.

Watching this video brought back a lot of fun memories of visiting Walt Disney World when I was younger and going on this tour all of the time. Even though we knew it wasn’t great, my friends and I always had a wonderful time using the tour as a chance to just sit back and relax for a few minutes during a long day.

Once, we were even chosen as volunteers for the water special effects stage. I played the mechanic who gets completely doused in water, but luckily they put me in a fully water-repellant outfit to make sure that none of my clothes got wet. It was, quite simply, a blast.

Rewatching the video in the context of this article though, made me sad that I never got the chance to experience the attraction at the height of its power. The final version of the attraction really only had Catastrophe Canyon going for it (though I did enjoy the villain exhibit at the exit because they had a full xenomorph costume from Alien). 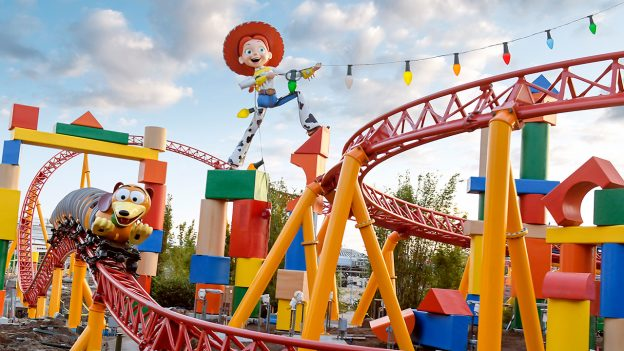 On September 27, 2014, the Studio Backlot Tour was closed for a temporary refurbishment that became permanent when Toy Story Land and Galaxy’s Edge were announced at D23 that year. It was unfortunate that guests never had the chance to give it a final goodbye, but the tour was truly a shell of its former self by that point, and it was time for it to go. Its departure truly signified the end of Hollywood Studios’ quest to teach guests about the movies and instead further preach its new goal of living the movies.

However, our study of backlot tours isn’t over this week because next week we’ll be travelling across the Atlantic to take a look at the French version of the tour.