Welcome to Extinct Attractions. My name is Cole, and today I’ll be your guide on a trip full of tricks and stunts. We are now just a week away from Rise of Resistance opening at Disneyland, and I truly could not be more excited. I’ll be there on opening day (crazy I know) because I just cannot wait any longer than I already have. Everyone who has ridden it in Florida says that it is one of the most incredible experiences they have ever had, and I am so thrilled to find out what they mean. As I said though, the attraction has already opened at Walt Disney World, and that’s where our story takes us today, to a time before Galaxy’s Edge was even a spark in the eyes of Imagineering. Starting on May 5, 2005, all of the Disney Parks around the world began the Happiest Celebration on Earth in honor of Disneyland’s 50th anniversary. Outside of Disneyland, Walt Disney World did the most for the celebration, with two of their parks receiving attractions from parks around the world. Epcot added Soarin' Over California from Disney California Adventure and Disney’s Hollywood Studios added today’s featured attraction, Lights, Motors, Action Extreme Stunt Show. 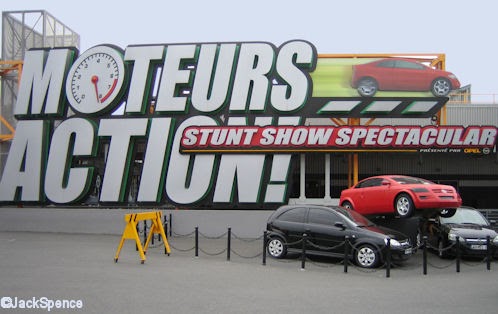 Motuers Action Stunt Show Spectacular opened in Walt Disney Studios Park in Paris along with the park on March 16, 2002. It quickly became one of the park’s biggest hits, so when Hollywood Studios was looking at which attraction to add, it seemed like a fitting move to bring over an attraction from its sister park in Paris. 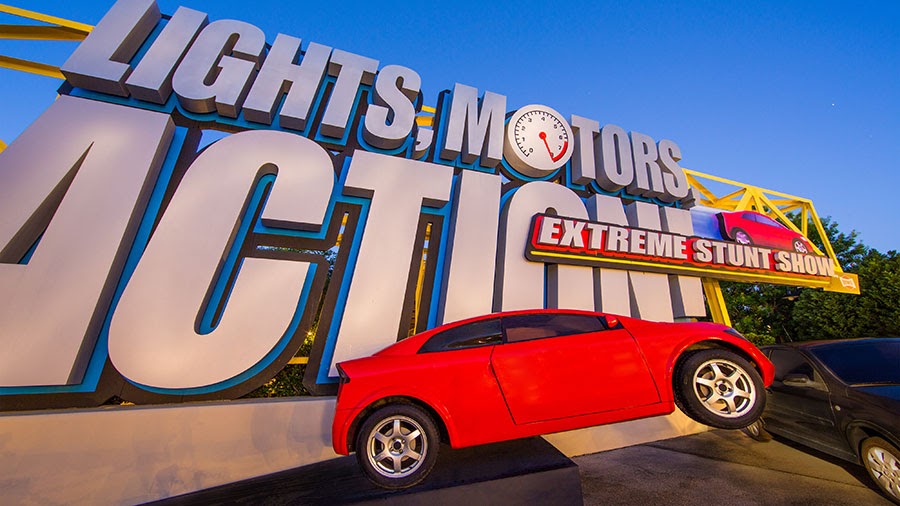 Lights, Motors, Action Extreme Stunt Show opened on May 5, 2005 as a part of the kick off for the celebration. It was tucked away in the back corner of the park near the Streets of America, but it still managed to draw in a few thousand people for every show because they generally only ran the show twice a day, except on really busy days where they would add a third in. It shows how complicated running a show with cars can be because a stunt show like Indiana Jones Epic Stunt Spectacular runs five to six times a day.

I had the chance to see the show a few times in Hollywood Studios, and I remember liking the show, but not particularly loving it, so before writing this piece, I decided to check it out again and see if things had changed.

The show starts off with a huge car chase that immediately gets everyone excited for the show about to come. There are jumps, gun shots, and all kinds of action before the director rolls out and yells “Cut!” One aspect of the show that was really interesting was that they pretended the show was an actual movie shoot, with a director and stunt coordinator basically talking guests through the experience. At times, the dialogue seemed to go on a bit long and wasn’t particularly well written, but for those not familiar with the filmmaking experience, I’m sure it was a fun look into how the industry worked.

Plus, this focus in the show made it one of the last vestiges of the park’s original purpose, to teach people about filmmaking. Today, the park is so focused on helping guests live the movies, which is fun, but also not much different from what you are doing at any other park that utilizes IP. 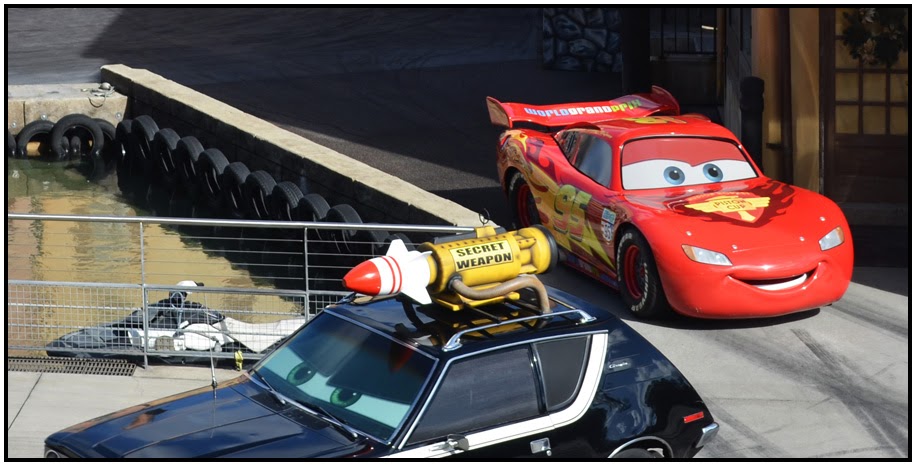 One part of the show that made no sense at all was Lightning McQueen’s appearance. The director barely even tried to explain why Lightning had showed up to this movie set, instead opting for a “Look who’s here.” Then, Lightning briefly drove around on a spy mission based on Cars 2 (ugh), with the show simply continuing on afterwards as if nothing had happened. It was truly a head-scratching series of events, and the 40-minute show would’ve really benefited from cutting the scene. 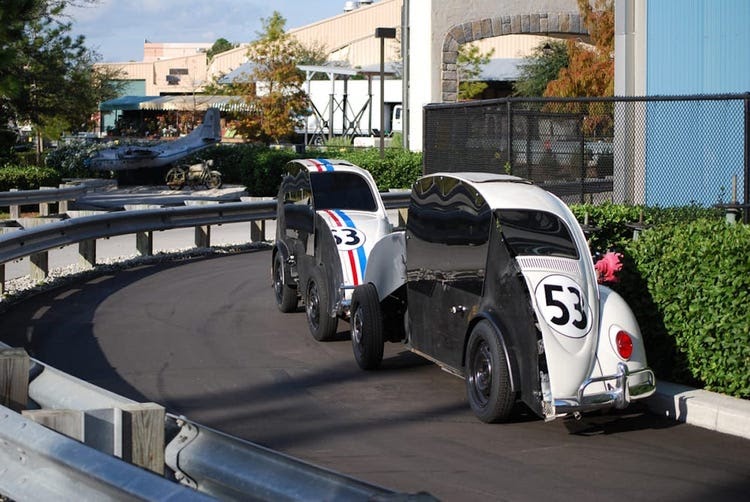 Before Lightning McQueen joined the show, Herbie the Love Bug had a scene in his place. While this scene’s placement also didn’t make a lot of sense, they at least used a pretty cool effect when they had Herbie split apart and each half was able to keep driving. It furthered the sense of movie magic unlike the scene that took its place. Finally, it was time to jump back into the stunts, with the next scene utilizing less cars and functioning as a more traditional stunt scene. We got to see our hero running around, riding motorcycles and even jet skiing. All the while, he was taking out bad guys left and right including a 30 foot drop and a fire walk. The fire walk was especially impressive because the actor needed to slide through the fire while also falling off his motorcycle. The entire sequence was definitely the most intricate of the entire show and set up the excitement for finale very well. 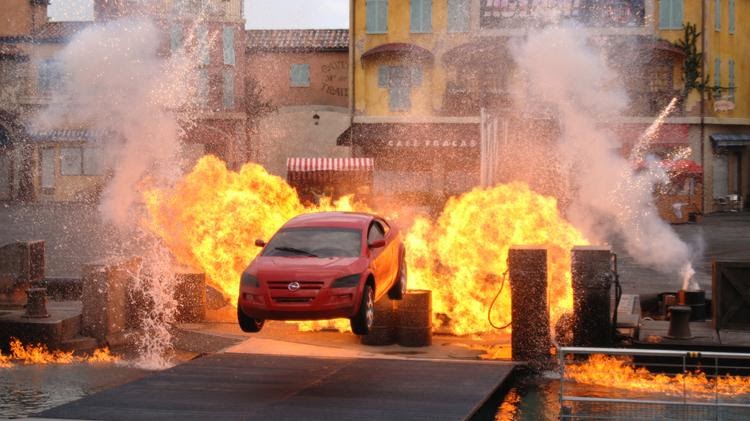 As a whole, I wish that the finale had gone on a bit longer because it felt like the payoff wasn’t quite there for the show. It only lasted a couple of minutes, but it did have one major thing going for it, the hero car jumping through fire. The image is the main one that people think about when they think of the attraction, so seeing that hero shot play out at the very end of the show was pretty awesome.

Watching the show again, I felt pretty similar to when I saw it years ago. The talking definitely went on a bit too long, but the action scenes were really fun. I’m not a huge car guy, but I respect the craft that went into building a car where the steering wheel was at the back of the vehicle as well as all of the drifting involved.

The show was pretty successful during its run but on April 2, 2016, Lights, Motors, Action officially closed in Hollywood Studios to make way for Galaxy’s Edge. Personally, I think it was a worthwhile tradeoff, especially because you can still catch Walt Disney Studios Park in Paris. I’m not sure how much longer the show will stick around there, though, because there are a lot of exciting plans for the park’s future and I don’t see Lights, Motors, Action fitting in.

Well, that brings today’s show to a close, but here’s your peek at next week. 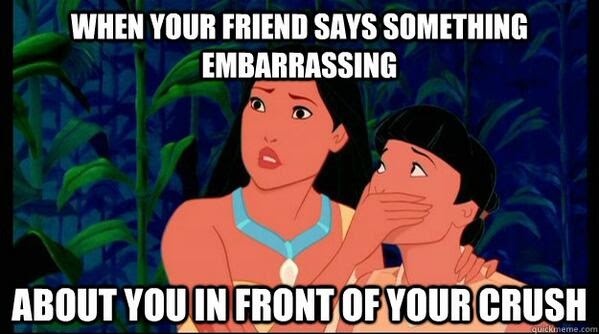