Walt Disney World’s 50th anniversary is coming up, with the big day just a day away on October 1st. To get ready for the event, we at Laughing Place are taking a look at various parts of Walt Disney World, past, present, and future each day, with today a blast to the past. Here at Laughing Place, we have interactive maps of every Disney Park throughout the years (created by yours truly). The maps are a fun way to visually examine how each of these parks changed over the years and serve as a wonderful companion to this piece where I look at which year’s lineup of attractions reigns supreme at Magic Kingdom You can follow along with the Magic Kingdom map and let me know if I made the right choice with my pick or if I was off my rocker. So let’s jump in and take a look at some honorable mentions before we get to what I believe was the best year to visit Magic Kingdom attraction-wise. 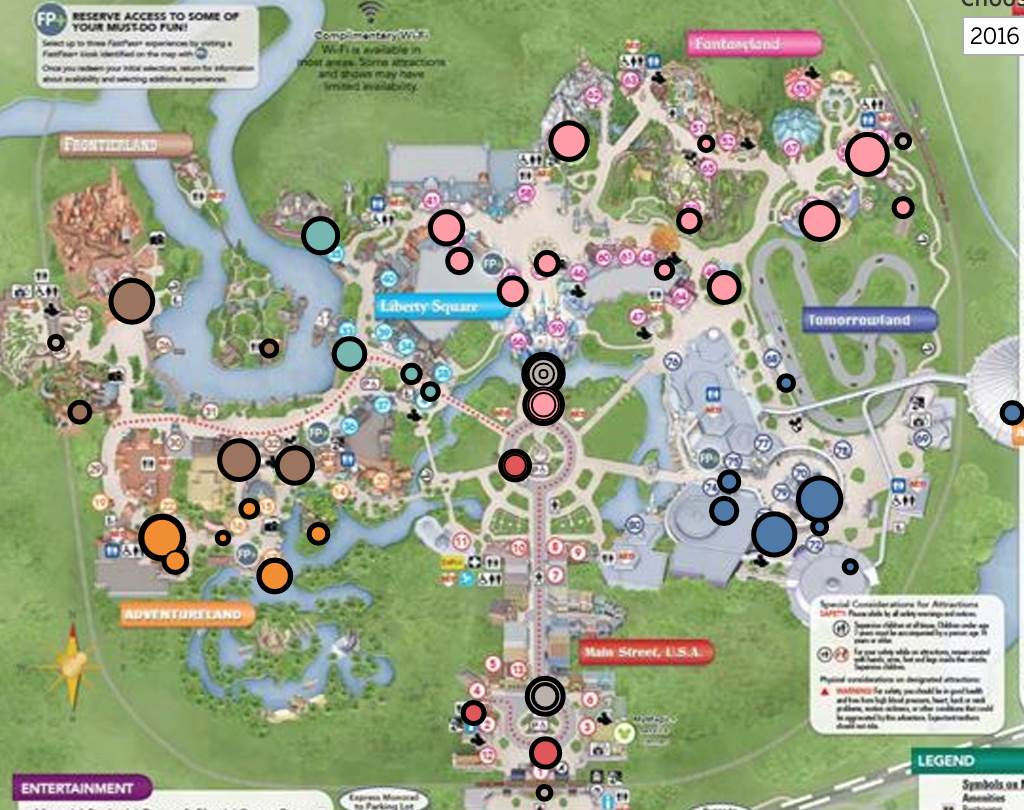 In the past few articles about the best attraction lineups at other Walt Disney World parks, there were some distinct transitions like Hollywood Studios switching from learn the movies to live the movies and Epcot switching from edutainment to IP. However, Magic Kingdom never really went through that same type of transition because so many of its early attractions have stood the test of time and are still around today, twenty-one to be exact. Because of that, it was a bit tougher to decide which year was the best with so many being so similar. But parcel it down I did, with 2016 being my first honorable mention because a year with New Fantasyland had to be included.

With that in mind, I started looking at 2014 or later, using the Seven Dwarfs Mine Train debut year as my baseline. The revaltized land also featured new attractions like the Dueling Dumbos, Enchanted Tales with Belle, and Under the Sea – Journey of The Little Mermaid. While none of these attractions will likely end up as a true classic in the long run, they helped the Disney Renaissance join in on the fun and provide one of the coolest experiences of spinning through the air in competition with another elephant. 2016 also gave us The Muppets Present … Great Moments in American History, a grand time for all of us Muppets fans out there. Plus, it was the last full year of Wishes, and while I prefer Happily Ever After personally, I know many people have a soft spot for Wishes, so including it in there for another year was a big win for a lot of people.

Between the top choice of year and 2016, a few more different attractions were The Many Adventures of Winnie-the-Pooh, replacing Mr. Toad’s Wild Ride, and Mickey’s PhilharMagic overtaking The Legend of the Lion King. Of these Fantasyland attractions, I preferred the original version in both cases, but both of the new versions certainly have some merits.

Magic Kingdom also switched out a few Tomorrowland attractions like the ExtraTERRORestrial Alien Encounter and The Timekeeper. Both of the attractions’ successors were much-maligned in Stitch’s Great Escape and Monsters Inc Laugh Floor, so they definitely helped me choose which year was the best. On the other hand, the final choice between the top year and 2016 was Main Street Electrical Parade over SpectroMagic. I know this is a controversial choice, but nothing will ever top my experiences with the Electrical Parade at Walt Disney World. Next on our list, we move to 1980 and the earlier days of the park. 1980 had so many of the Opening Day attractions including Country Bear Jamboree, Haunted Mansion, Tropical Serenade and Jungle Cruise on the left side of the park. On the other side, we had the Walt Disney World Railroad, it’s a small world, and Peter Pan’s Flight. All of these attractions are still around today, so we won’t dive too deeply into them as they appear in each choice of potential year and thus don’t serve as a great differentiator between lineup choices.

Following that same logic, there are a few classics that debuted a little after Opening Day, but quickly caught a foothold and are still around today. Pirates of the Caribbean, Liberty Square Riverboat, Space Mountain, Carousel of Progress, the PeopleMover, and Big Thunder Mountain Railroad all fit that bill, and by choosing 1980, we were able to include them all in each and every attraction lineup.

However, there were still some perks to choosing 1980 as the year with some extinct attractions that wouldn’t make it over to the top choice on this list. Over in Tomorrowland, there was the Magic Carpet ‘Round the World and Mission to Mars. These two theater in the round attractions, both helped transport guests to faraway lands, though one did it by utilizing screens all around the guests, while the latter put the screen at center stage. If You Had Wings and the Star Jets both taught guests about flying, albeit in very different ways. Elsewhere in the park, the only other attractions open in 1980 that didn’t make it until my final choice for best year were Swan Boats and The Walt Disney Story. Personally, I was a fan of both and how they served as a nice diversion for guests looking to avoid some crowds. 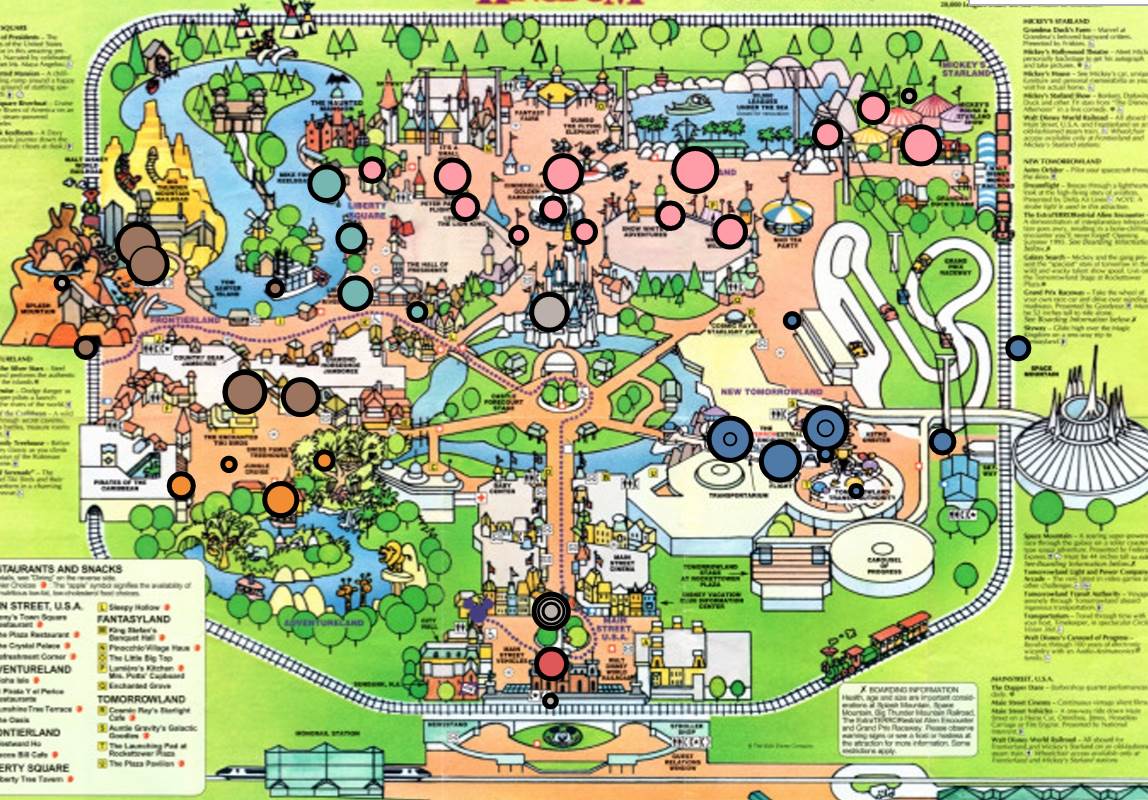 Finally, we come to the best year in Magic Kingdom’s history, 1994. Starting with attractions that were around in 1980, but gone by 2016, we have Mike Fink Keel Boats and Davy Crockett Explorer Canoes over in Frontierland. These modes of transportation helped provide some unique views of Tom Sawyer Island, but ultimately guests just weren’t as interested in those old school transportation methods, so they faded out in time. Over in Fantasyland, two Opening Day Fantasyland attractions closed in Snow White’s Scary Adventures and Mr. Toad’s Wild Ride. We still have them over in Disneyland, but I think the versions in Walt Disney World were the superior ones. We also had 20,000 Leagues Under the Sea, which left for just Pooh’s Playful Spot, so it’s pretty clear what the winner was there. The last attraction to fit into this trend was the beloved Skyway. I never got the chance to experience it myself, but boy do I wish that I had because soaring around the Magic Kingdom seems like one of the coolest things to do.

In between 1980 and 1994, we got Mickey’s Toontown Fair, which sadly faded away when New Fantasyland came along, though bits and pieces did manage to stick around incorporated as a part of the Storybook Circus. In 1991, we saw the switch from the Main Street Electrical Parade to Spectromagic. As mentioned earlier, I am a huge Electrical Parade stan, but Spectromagic needed to be included on at least one of these lineups because it would be most people’s top choice. 1992 brought Splash Mountain to the park, and though it’ll be changing soon, it’s hard to deny how classic the attraction is.

Finally, in 1994, we did lose Mission to Mars, but we got the Legend of the Lion King and the Timekeeper, both of which were nice additions to the park. At the time, the park needed some more attractions to help with crowd control, so these attractions were perfect choices to help eat as many people as possible. For me, the addition of Toontown helped push 1994 over 1978 to me because there weren’t many notable subtractions in between the years, so let’s take the year with the additions.

Thanks for reading and let us know the year you would choose to visit Magic Kingdom!