Welcome to Disney Extinct Attractions. My name is Cole Geryak, and today I’ll be your captain on a journey through liquid space.

This weekend is Star Wars Celebration, which is exactly what it sounds like: a full weekend convention all related to Star Wars. I actually had the pleasure of attending a few years ago, and it was an amazing experience getting to see so many Star Wars-based things, especially for a huge Star Wars nerd like me. (I even started a Star Wars Club at my school.) I wish I could’ve gone this year, but unfortunately, it is on Easter weekend, so I couldn’t make my way to Orlando.

In the early 1950s, Disney was still just getting into the business of live-action filmmaking after having focused primarily on animation and hybrid films combining animation and live-action throughout most of its history. But Walt Disney was a firm believer in creating entertainment of all kinds, so he began to help his company branch out even more.

One of the first live-action hits that Disney put into theaters was 1954’s 20,000 League Under the Sea. Based off of Jules Verne’s classic novel, the film grossed almost $30 million (equivalent to over $250 million today) on a $5 million budget. Those margins made it a certified hit and a prime target to be put into Walt’s new pet project, Disneyland.

When Disneyland first opened, Tomorrowland was a bit barren and in need of some more attractions. With that in mind, an exhibit featuring the props from the film opened on October 4th, 1955, less than three months after the park’s official opening. 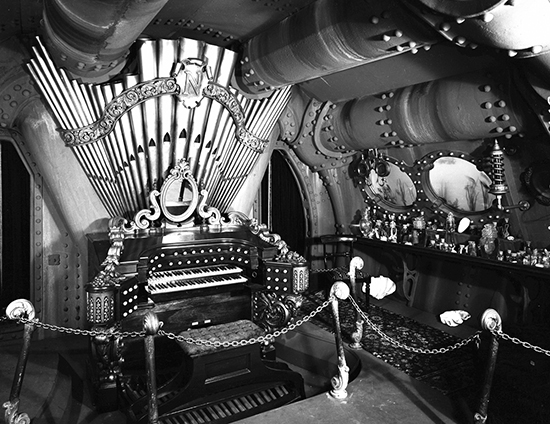 What I loved about this exhibit was how close you could get to all of the props and sets from the film. In a way, this exhibit served as a precursor to Disney’s Hollywood Studios by teaching guests of all ages about how films were made in a roundabout way.

Located where the Starcade currently is, this exhibit actually lasted for nearly eleven years, pretty good for an attraction quickly put together to help entertain crowds. But ultimately, the attraction did close on August 28th, 1966 because fervor for the film had died out. Via Geek and Sundry

With its closure, nearly all the props were removed from the park, with the exception being the organ used in the film. The instrument actually still resides in the Haunted Mansion, keeping the 20,000 Leagues exhibit alive in our hearts and our eyes.

Meanwhile, part of the reason that the exhibit was no longer necessary was because close by in Tomorrowland, Disneyland had opened the Submarine Voyage. Though not directly related to the film, this attraction did help bring that type of undersea adventure to Disneyland and paved the way for a more directly related experience to grace Walt Disney World. 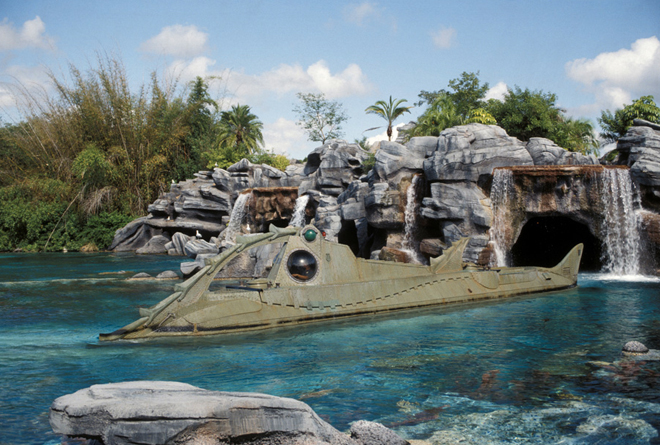 Via The Disney Sophisticate

Opening on October 14, 1971, in the Magic Kingdom, the attraction in Florida was called 20,000 Leagues Under the Sea: Submarine Voyage.

Unlike its Disneyland counterpart, this attraction actually was directly based on the Disney film. For example, Captain Nemo’s voice appeared over the ship’s intercom during your voyage to visit the North Pole. But before I say any more, you can find a video of the attraction below if you don’t want any more spoilers.

One of the best things about 20,000 Leagues Under the Sea was how it differentiated itself from the attraction in Disneyland. Though the general concept was the same, the story of the Magic Kingdom version did have more to do with the the film, with guests even getting a chance to ride the Nautilus itself.

One other thing was that the attraction was actually pretty intense, especially once the submarine entered the darker scenes. At that point, guests got the chance to see part of the lost city of Atlantis, but immediately after, a giant squid attacked and rocked the entire boat, giving a scare to some of the more skittish guests.

One other interesting aspect of the Magic Kingdom version was that it was a part of Fantasyland as opposed to Tomorrowland. Because of the addition of Atlantis, and other minor aspects of the attractions, I feel that it definitely fit Fantasyland better. (Though, I do think the Submarine Voyage in Disneyland fit Tomorrowland better, so good work by the Imagineers here.)

Ultimately, I do think that Florida’s version reigned supreme in the battle between the Submarine Voyages. Sadly, that fact was not enough to save the attraction from extinction, with the subs final run coming on September 5, 1994. On that day, the attraction closed for an extended maintenance period. Guests waited anxiously as months turned into years before Disney announced the attraction’s official closure in 1996. In place of the E-Ticket attraction, Disney decided to place … a statue of King Triton, with the entire lagoon now a part of Ariel’s Grotto, basically a meet and greet with Ariel. To say that it was a waste of real estate is a bit of an understatement, but this actually wasn’t even the biggest misuse of the space in the area’s history. In 2004, the Magic Kingdom finally filled in the lagoon of the attraction to put in Pooh’s Playful Spot. Many fans of the attraction were really upset that their last hope that 20,000 Leagues would someday return was erased by the addition of a children’s park based off of Winnie the Pooh (for whom, guests were still also angry that an attraction centered around the bear had replaced Mr. Toad’s Wild Ride).

Eventually, the Playful Spot was erased to put in the Seven Dwarfs Mine Train, which was finally the fitting replacement that the Submarine Voyage deserved in my opinion. Also, the coolest part of Pooh’s Playful Spot was that if you went inside the treehouse, you would see a tree carving of a submarine, representing the area’s past. Luckily, when the Playful Spot closed, the tree moved over in front of The Many Adventures of Winnie the Pooh, so you can still see the submarine if you want. 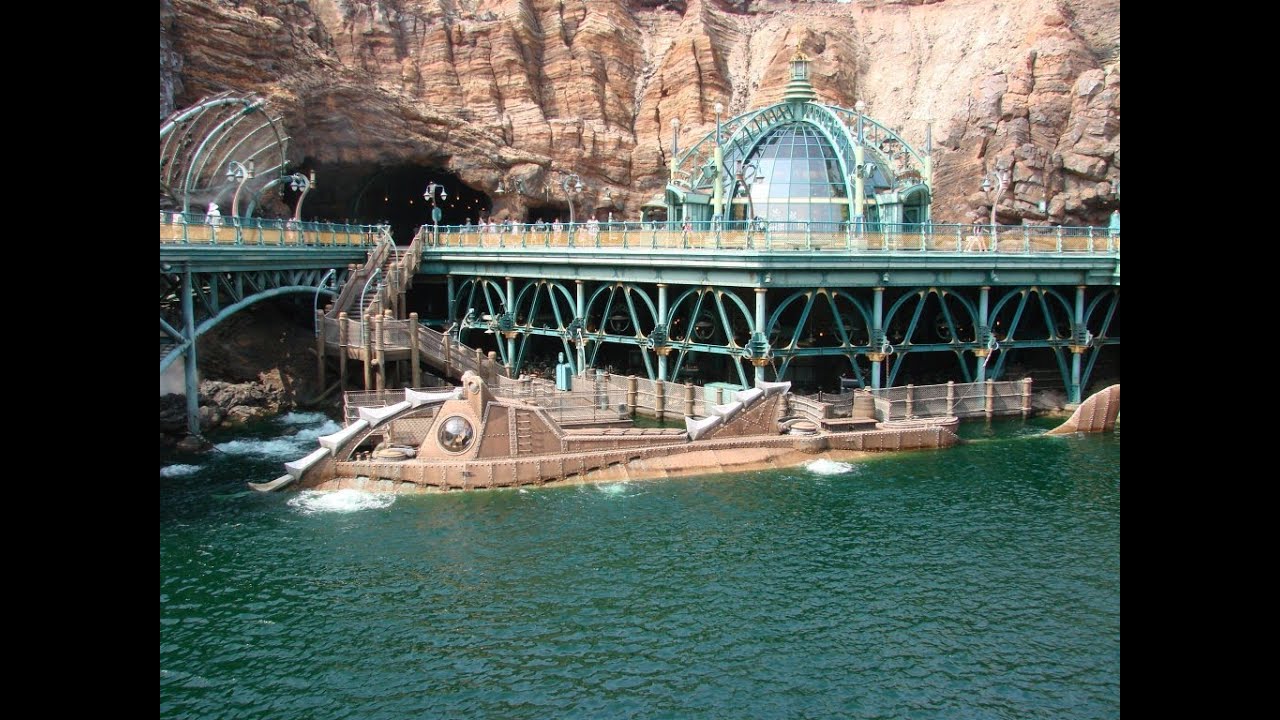 Even with its disappearance at the Magic Kingdom, 20,000 Leagues Under the Sea is still represented in Tokyo Disneyland with an attraction of the same name, though the ride system is not actually a submarine. Instead, it’s a dark ride, and I’ve only heard awesome things about the attraction.

Over in Disneyland Paris, one can find a direct followup to the 20,000 Leagues exhibit, known as The Mystery of the Nautilus. Guests can explore a replica of the submarine from the film, and I think it represents a perfect tribute to the exhibit’s time in Disneyland. (Also, I want to wish a very happy 25th anniversary to Disneyland Paris, which it celebrated yesterday.) 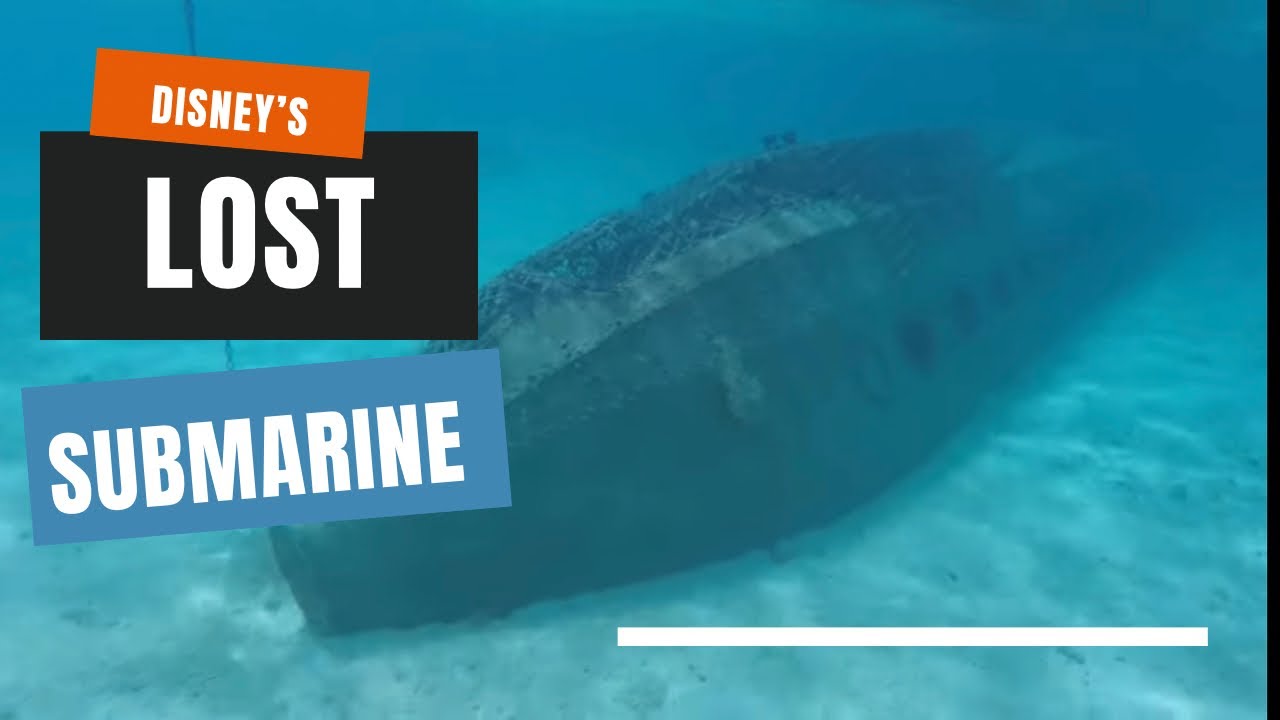 Last but not least, you can actually swim by the remains of two of the submarines from the attraction if you go on a Disney cruise that visits Castaway Cay. Submerged in the ocean water, I think these subs have the perfect resting place and are a great way to remember this attraction forever.

So that brings our journey today to a close, but here’s a look at what we’ll have next week.

I hope you all enjoyed this post and learning more about these attractions as much as I did. We certainly took a long journey around the world today, but I had fun and learned a lot. 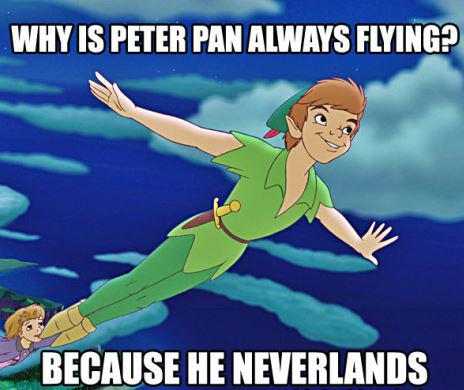