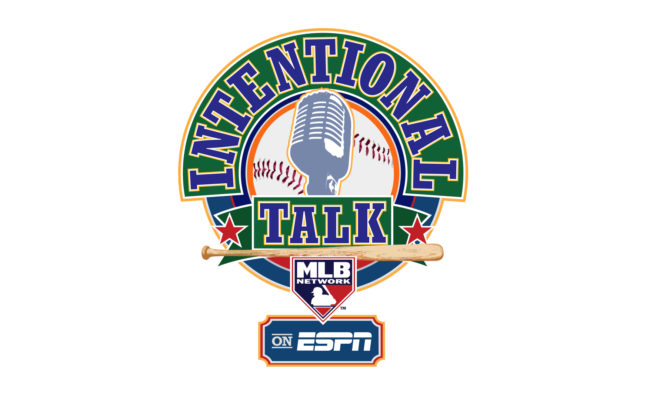 Following yesterday’s massive layoffs at ESPN, the first new programming offering since the downsizing has been announced. As part of a new collaborative effort between ESPN and MLB Network, the two entities today announced that ESPN will add MLB Network’s popular studio program Intentional Talk to its afternoon lineup starting Monday, May 1. The year-round, weekday show will air Monday through Friday on ESPN2 from 4-5 p.m. ET during the season, and will air as a 30-minute telecast in the offseason. Intentional Talk will also continue to air in its regular 5 p.m. timeslot on MLB Network. Essentially, it will replace the daily broadcast of ESPN’s perennial Baseball Tonight. As part of the layoffs, ESPN reduced their bench of MLB Analysts and this news helps explain that decision.

Intentional Talk is an open forum where everyone and everything are the subject of discussion and baseball’s entertaining personalities are always on display. Veteran sports broadcaster Chris Rose and 2004 World Series Champion Kevin Millar will continue to serve as the primary co-hosts for Intentional Talk, with ESPN MLB commentators now periodically appearing on the show. MLB Network will continue to produce Intentional Talk and the show’s format will remain intact.

Burke Magnus, ESPN Executive Vice President, Programming & Acquisitions said, “Intentional Talk provides us with a highly-entertaining, weekday afternoon MLB presence as we have with other signature sports properties. Intentional Talk joins Baseball Tonight, our long-standing MLB studio show, as a second and distinct MLB studio offering. The move provides us with more baseball studio content than we’ve ever had. These shows, combined with our 100-plus game schedule – including an annual Wild Card Game – are important parts of a myriad of cross-platform baseball content at ESPN, underscoring that MLB content is fundamental to ESPN’s offerings. We’re grateful to have such a productive relationship with our Major League Baseball partners and we look forward to our continued collaboration on this and many other projects.”

Rob McGlarry, MLB Network President said, “As it continues its seventh year on the air, Intentional Talk has proven to be an important outlet to showcase MLB’s entertaining and distinctive personalities. The program will now reach a new and different audience through ESPN’s platforms, recognizing that there may be some changes between shows as news dictates. This cooperation further broadens the enormously productive relationship between MLB and ESPN.”