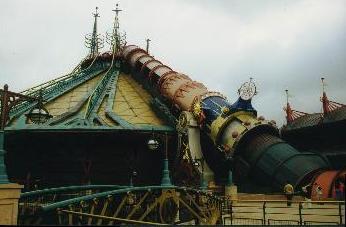 Space Mountain: From the Earth to the Moon at Disneyland Paris.
Notice the launch tube on the right.

I was hired in 1975 specifically to work on Space Mountain, Disneyland. Space Mountain WDW was very cool--the building stood aloof, outside the train tracks. We had to squeeze a more urban Mountain into Disneyland. Another feature we were very aware we were dropping was the separate load/unload areas. It just seems scarier when you can't see people getting off after a safe journey--there's an Aesop fable to this effect.

The key designer on both WDW and Disneyland was George McGinnis, a very nice man to work for (think Charles Schulz) whom I understand was very active with his wife in various Christian youth organizations. The man who worked out the incredibly fussy geometry and structural issues on both was Glenn Durflinger. I was a junior member of the Glenn's architectural team. Architectural designers at Disney have always been individuals ranging from Hollywood set designers to real world architects to people who were more properly called engineers. Glenn was one of the latter--he shocked the younger architecture types by using a mechanical drafting arm on his board. (Glenn was also the realizer of Cinderella's Castle at WDW.)

This was my first project at WED [What Imagineering was called back them - Ed.]--everything impressed itself upon me. I remember asking George how we should treat some corner of the load area. We discussed some ideas before he pulled a tattered brochure from a desk drawer--it was a dog-eared program from the movie 2001:A Space Odyssey. He didn't copy the sets, but they obviously inspired some details, such as the white "spools" at WDW's load area. What shocked me was that a top designer at WED (George holds design patents for things like the PeopleMover cars) didn't have access to all the MGM set designs he wanted; if he lost that old program, it was irreplaceable. Not to sound ancient, but this was before anyone could pop a rented copy of "2001" into the VCR, let alone capture video stills.

One of the very few things I can point to as my design at any park after six years at WED is a tiny part of the queue line at Space Mountain Disneyland. Glenn's plan had been for the queue to snake past a control room with audio-animatronic figures looking at the load area through plate glass windows. The line would lead into the loading bay itself, and you'd be able to see the controllers looking down at you--the queue would be a slow circular pan, in film terms. One afternoon, Glenn was despondent because his entire control room fell to the budget ax. I seized my chance and scribbled alternative designs. Because the queue made a sharp turn there, I sketched a hexagonal room with doors in all directions, each apparently leading to a loading bay. The queue "chooses" to go through door #1. Door #3 is what we called a "chicken exit"--a shortcut to the exit hall. Glenn let me do it, and filled in his control room windows with a fairly cheesy "star field."

Another story from the six months or so we spent producing the plans: We drew many sections at various places in the building, starting with Don Hilsen's computer-controlled track alignment. We would draw the building shell and the track and then a dotted line showing the track's "clearance envelope," or how far any passenger could reach. We did dozens of these sections as we began to lay out the "sets" along the ride. I worked for a more senior designer named Joe Navarro (who later did both Big Thunders). He knew how to amuse the younger drafters. Glenn criticized some of Joe's sections one day because he couldn't tell which way the coaster cars were travelling. Joe promptly labeled the tracks as either "TRACKGOINFRUMYA" or "TRACKCOMINATCHA." I remember laughing even as I stayed late to erase every one of Joe's labels.

Finally, I have to mention how upset I get thinking about the Disneyland Ops people's decision to stretch the queue line through Tomorrowland rather than use the maze we (I, partly) designed on the second floor promenade. When Space Mountain first opened in April 1977, it was the hottest thing, naturally. Only the second thrill ride at the park and the first new attraction since the Country Bear Jamboree in 1972. So crowds were intense, and the Ops people heard a steady stream of invective from guests that waited in line, rode the speedramp and were surprised by a hour's queue at the top. The speedramp couldn't be run continuously, because it delivered more people than the promenade would hold. Lines of people clogging the park would not have been tolerated by Walt--C. V. Wood and others solved problems like that back in 1955. I'm embarrassed that we at WED probably screwed up, but I wouldn't have rested until it was fixed. Time heals all--the queue works as it was intended now because the 23-year-old ride isn't mobbed anymore.

One of the cool things about Disney is that while thousands of ideas go unbuilt, none are ever forgotten. Glenn's control room idea became part of the queue for Star Tours--only this time with aliens.

Twenty five years and still going strong, Space Mountain is a Disney classic - a Disney original - and it's only getting better!

Sources include The E-Ticket Magazine and The Nickel Tour