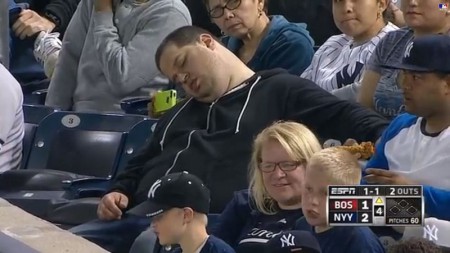 A Yankee “fan” who was caught sleeping during the fourth inning of a Yankee/Red Sox game at Yankee Stadium is suing ESPN, Major League Baseball, and announcers Dan Shulman and John Kruk for $10 million.

Andrew Robert Rector was caught nodding off during the April 13 edition of ESPN’s Sunday Night Baseball. His typo-filled lawsuit claims that Kruk and Shulman unleashed an “avalanche of disparaging words,” whose effects were multiplied when footage from the game was posted to MLB’s YouTube channel where the clip has 552,408 views.

Kruk, Shulman, ESPN, and MLB had no comment on the lawsuit at this time.