Welcome back for another recap of Freeform’s Motherland: Fort Salem. Raelle is finally healed, but with every good thing comes more trouble. The Army starts moving into the Cession and Alder heads to Europe in search of stewards of the First Song. 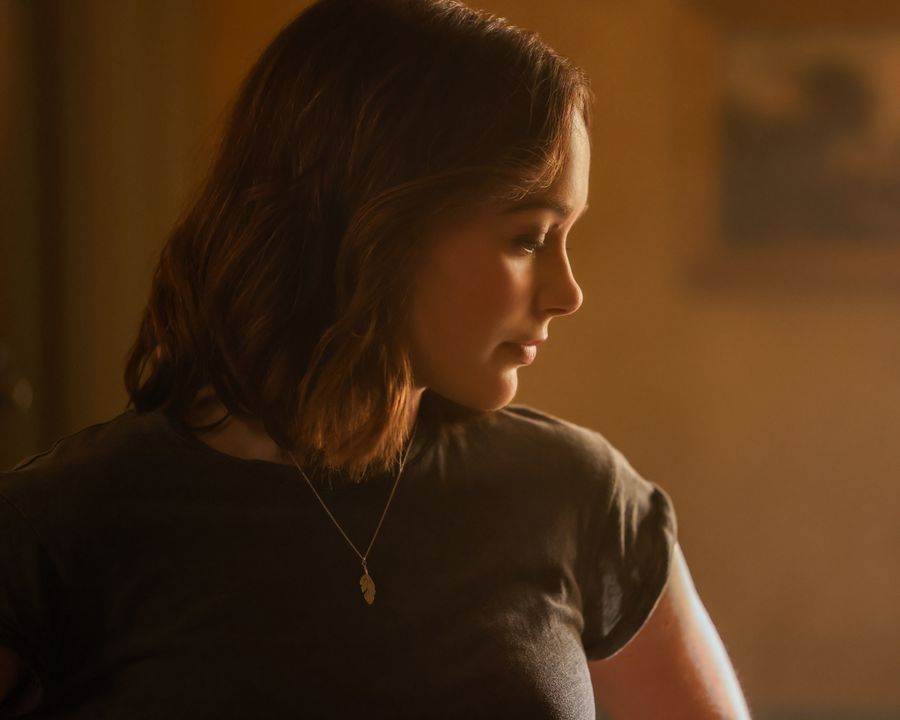 Raelle (Taylor Hickson) wakes up in a meadow. She’s lying on a picnic blanket and Willa (Diana Pavlovska) is there. She asks her mom, “why did you bring me here?” Willa reminds her of all the weekend picnics they used to have then tells her daughter “you’re healed. We can be here…. “Or I can leave?” Raelle asks. Willa confirms and says the choice is up to her, but if she leaves, the Mother won’t be able to bring Raelle back. As much as it pains them, Raelle has to go. “Goodbye, Mom.” Willa hugs her daughter and as she walks away says, “the Mother will call on you in the end.” Everything goes black and Raelle is alone.

In the Cession, Thelma Bearkiller’s (Olivia Lucas) mallita is gearing up for the invasion. Anacostia (Demetria Mckinney) asks about finding the Marshal, but Thema thinks it’s a foolish idea, now is not the time. Ana asks her to just point them in the right direction. She reveals that the Marshals share a link, similar to the way the biddies were connected to General Alder. If they can find a Marshal, they can get to the chief. Thelma shows them where one is stationed but they have to hurry, and she won’t be joining them because the Council has called an emergency  meeting. Abigail (Ashley Nicole Williams) asks if the council is changing their position and will send the Bellwether unit back, but Thelma assures her she won’t let that happen. 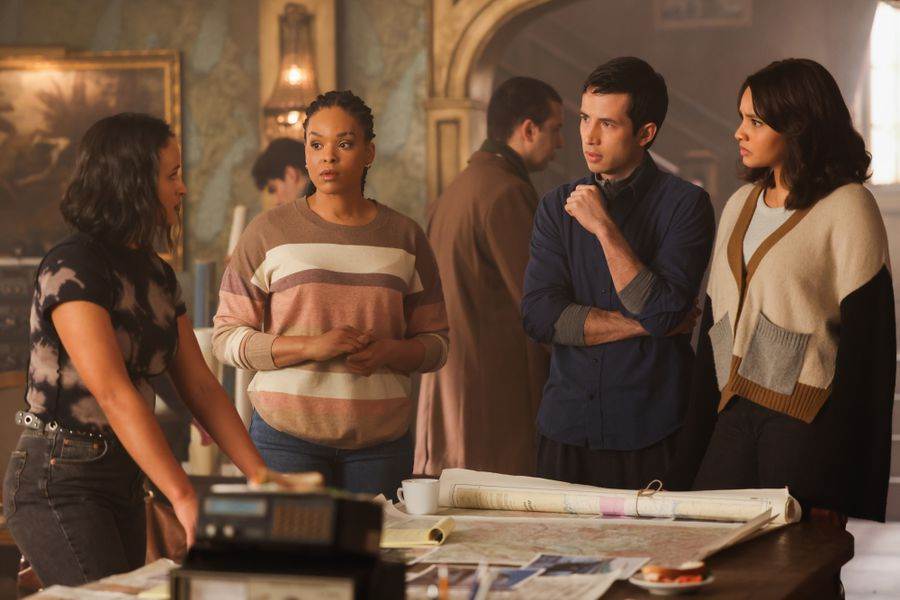 Scylla (Amalia Holm) is still desperately trying to reach Raelle using necro work, but to no avail. She wants to keep at it, but Abigail says she’s part of the unit now and they need her help. She further presses that if Raelle comes back she’ll find them and she’d want Scylla to be fighting by their side. Scylla agrees, “what do you want me to do?”

Thelma arrives at the Council meeting and asks her fellow leader Milly (Quelemia Sparrow) (who liked the group) if this Community Center is safe. Milly seems overly confident they are fine. Satisfied for the time being, Thelma admits to the Council she’s been preparing for this day and has formed a militia. They’re not happy but want to hear her out. Someone asks if she’s been hoping for a war, but Thelma says she wants to avoid having their lands taken from them again.

Tally (Jessica Sutton) is making her way back to the Cession with the same driver and truck that brought her to California. Suddenly the driver goes off route, following a bird that guides them to…Mac, the dodgers and Scylla.

Ana, Adil (Tony Giroux) and Abigail arrive at the border and Ana goes to talk to the officers. Abigail tells Adil she can  feel the fear in the air. He agrees and says people won’t be getting much sleep in the days to come. If they can find  President Wade, they can end this now. Ana returns with the border Marshal who admits that lately it’s been hard to locate the head Marshal. However, if he’s in the Cession they can find him. Just then an Army unit pulls up and the wards lift right as they arrive. Someone working on the inside?

Thelma asks the Council for support for the militia, but as she’s speaking suddenly everyone falls over. Cousin Milly stands up and Thelma realizes she’s in trouble. She curses right before she’s attacked. When she comes to, she’s collared. Milly reveals that the Camarilla came to her and agreed to address issues the Council had ignored. Thelma asks what she’s done and points out that they’re here now and won’t leave. The treaty is broken and everyone is vulnerable.

While Tally looks into the future, Mac tells Scylla he’s happy to help them look for the Marshal. He admits that he was mad when the dodgers were forced to move, but the people in the Cession were kind and provided them a home. He wants to return the favor and is willing to do whatever it takes to help. Tally comes out of her vision and tells the others the Council is in danger. But she thinks they can save them.

In Madrid, Spain a man is tending to the antiques and relics in his store. Sarah Alder (Lyne Renee) walks in and says she’s looking for Santos to help her locate an artifact. The shopkeeper says he’s Santos. As he’s speaking he slides a knife in sleeve. He tells her to follow him and as they leave the room they walk past a picture of Santos and Camarilla leader, Alban Hearst.

The border guards refuse to let the Army through, but the “Peacekeeping” commander says he doesn’t recognize their authority. The Marshal tries to perform his work but it bounces off the commander’s armored vest and knocks the Marshal out. Watching from a distance, Adil indicates he wants to fight, but Anacostia says no. They watch as the commander kills the Marshal. He turns to the cadets and says they’ll encounter hostile witches like this, then orders them to arrest the others. The cadets are shocked but do as they’re told. Both Abigail and Adil are determined to stay and Ana wishes them luck before taking off.

Scylla and Tally stake out the Community Center waiting for the guards to change positions. Scylla asks if Tally had had her sight during their first year at Fort Salem and witnessed them working together would she have believed it? Probably not. Both of them would have done what they did out of love for Raelle. Tally takes this time to tell Scylla about her Witch Bomb vision. Maybe though, if they find Raelle they can prevent the end of everything.

Alder tells Santos (Paul Moniz de Sá) he can drop the act. She knows he’s a descendant from a long line of witch hunters. He insists he left all that behind and he’s not supporting the Camarilla. She can ask him anything. She says she’s here about the First Song.

As the Army troops move in, Adil steps out into the road. A jeep dives toward him, but he bends down and makes the earth rumble, causing the car to flip over. The commander walks up to him and orders the cadets to wind strike, but before anything can happen, he falls over dead. An invisible Abigail reveals herself and the cadets recognize her. One girl named Lupe Cortez says more troops are on the way, Abigail and Adil should run. Abigail tells them to release the border officers then address the unit. They are to undermine Colonel Jarrett at every turn under the guise of following orders. She reminds them they are Petra Bellwether’s soldiers, “make her proud.” They all stomp in unison.

Santos says the last two bloodlines Alder is looking for don’t lead to living stewards of the First Song. One line was lost entirely, the other died out before they could pass it on. She’d have to travel back in time to get them. He remembers something and pulls out a silver box. Alder opens it to reveal parts of a music box playing a recording. Santos says it’s a souvenir of sorts taken from the steward. “Her vocal chords,” Alder says. Santos admits it’s horrible and yes, he told his students about the custom. It seems that Hearst has revived the practice. Alder looks around the room and sees a rope noose in a glass box with a small plaque saying it was used to hang her sister. Alder looks at him and claims it’s fake, the real device was braided leather. Santos makes a desperate attempt to stab her but it does nothing. He falls to his knees and pleads that he’s a different person. “So am I,” she says. She hangs him and drains his blood. 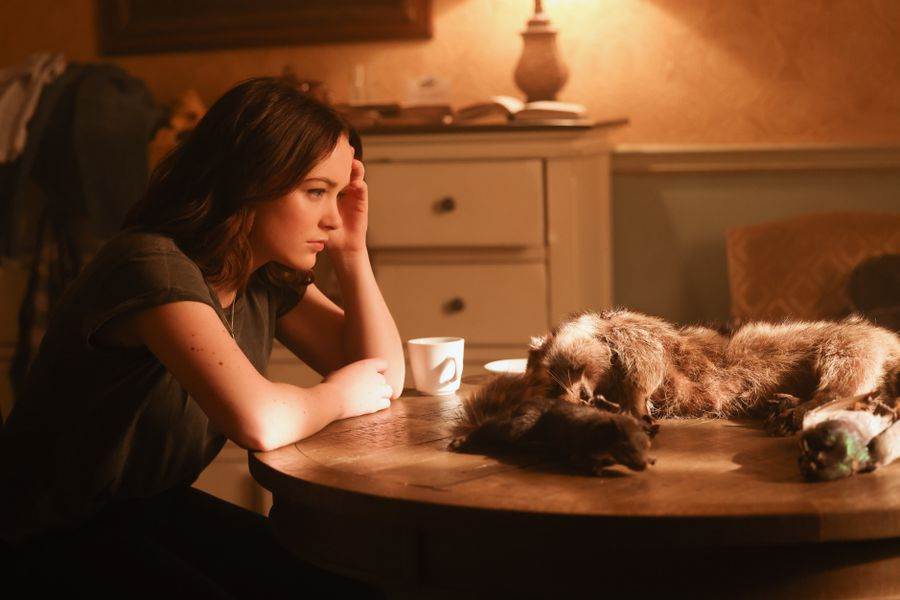 Tally and Scylla get in and release Thelma from her collar. Scylla works to wake the others while Tally and Thelma corner Milly. Now to wait for the Army to arrive. As night falls, Scylla addresses the dodgers saying they have the element of surprise. She tells them to use non-lethal work; these are fellow witches. Mac is impressed and comments on how she’s changed, and how Tiffany misses her. She sends her love to the little girls and suggests the dodgers should go when this is over. The soldiers arrive and are ordered to capture the Council members. As they move in on the Community Center a dense fog settles and glass bottles break at their feet. The cadets stand still and recite their conscription pledge.

The distraction works and nearly all of the Council members make their way out when Tally sees the special forces unit and a Civilian Oversight commander. Scylla has an idea. She is going to protect her friends, but she needs Thelma’s help. Thelma runs outside and is immediately caught by the soldiers, but it turns out they’ve captured Scylla instead. Inside Tally tries to knock out the commander, but his armor takes her down. Two soldiers recognize Tally and state that she’s to be secured, but the commander doesn’t care. He’s gonna kill her anyway. A sudden burst of mycelium appears where he was standing and Raelle is there. Yes, it’s really her! She helps Tally up and the girls have a moment. “How did you find us?” Raelle says she could feel Scylla then asks where she is.

Nicte Batan (Kandyse McClure) shows up at a small diner where Ana happens to be sitting at the counter. The women make small talk that feels like some type of code. Anacostia leaves and a few moments later Nicte taps the counter. All of the patrons stand up and walk out with her.

Following their eventful day, Abigail and Adil return to tell Thelma the bad news about the border Marshal. They also want to enlist in her militia. She says first they should talk to their friend. Abigail turns around to see Raelle and Tally. The Bellwether unit is finally reunited, but they’re missing Scylla. They have to assume she was taken prisoner, but Abigail assures Raelle they’ll get her back.

Alder has returned to the Cession and she’s here to see Tally. Tally doesn’t have time for distractions; she’s worried about her vision of the Witch Bomb. Alder says the only thing more powerful is the First Song. “We must trust the Mother.” Tally resigns herself to the task and wonders how far ahead she needs to look. Alder corrects her, they need to go back. Tally is going to learn to see the past.

A collared Scylla hears two soldiers talking about the Witch Bomb that took out the commander. She gets their attention and asks if they really saw it. Yep, It was Raelle Collar. Scylla smiles. Confused by her expression they ask if she knows where they’re taking her? It’s called the Interrogation Center. She’s not fazed, “it wouldn't be the first time.” The soldier says they call it the Slaughterhouse because none of the witches who go in have come out. Fear clouds her expression.