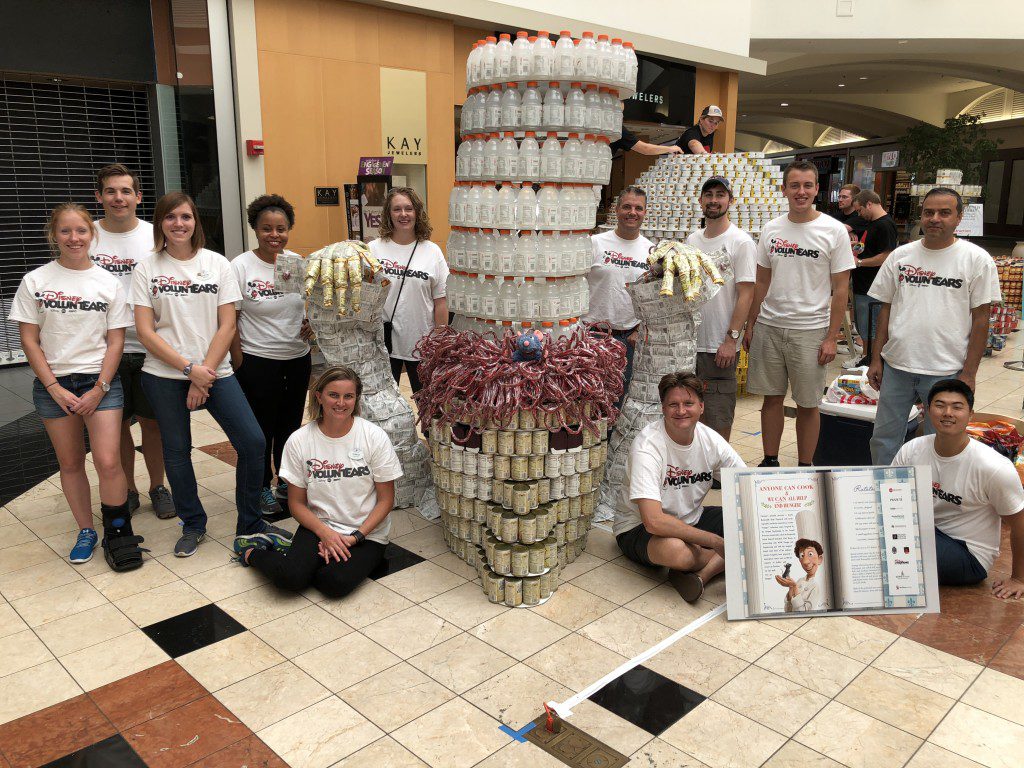 Within only one day, 50 Disney VoluntEARS completed a larger-than-life sculpture of a famous chef engineered from more than 6,500 canned food items.

This masterpiece is part of the design and build competition called CANstruction Orlando, an annual event hosted by Central Florida’s architectural and engineering community. Disney VoluntEARS cooked up the concept for their artistic creation thanks to some inspiration from the Disney/PIXAR film, ‘Ratatouille.’

“Whether you’re a fan of Disney/Pixar’s ‘Ratatouille’ or more recently discovered the story of this clever little culinarian, the sculpture of Linguini and Remy shows anyone ‘CAN’ make a difference in our community,” said Mike Piatek, director of Architecture and Facilities Engineering for Walt Disney World Resort. “By creating this CANstruction sculpture, Disney Cast Members hope to inspire others to assist those in need throughout Central Florida.”

Teams representing organizations from across the community joined Disney to participate in this year’s event. All of the can creations are on display through Sunday, Nov. 5, at Orlando Fashion Square. After the competition, the nonperishable food is donated to Second Harvest Food Bank of Central Florida.

“The support we receive from organizations through events like CANstruction make a big difference for the individuals we serve,” said Dave Krepcho, President and CEO of Second Harvest Food Bank of Central Florida. “This event also helps increase attention around Central Florida for our vision and work to inspire and engage the community to help end hunger.”

Walt Disney World Resort and its Cast Members have supported Second Harvest Food Bank for the past 25 years, including distributing unused, prepared food from restaurants and conventions through the Disney Harvest Program. Since 2012, Disney VoluntEARS have donated nearly 40,000 food items through the annual CANstruction Orlando events.