Well, after a week of buildup and teases across social media, Dollywood has revealed what they have in store for the 2023 season and it really is BIG.

According to legend, Big Bear is a massive black bear who has been roaming through Wildwood Grove for as long as anyone can remember. While no one has ever seen him, telltale signs regularly appear in the hills surrounding the Grove. Dollywood guests are invited to join Wildwood Grove’s resident wilderness explorer, Ned Oakley, on an adventure to find Big Bear. From his base camp—located just a stone’s throw from the Grove’s Hidden Hollow—Oakley takes adventurers for the rides of their lives in his specially-outfitted, “four-wheel drive SUVs.” 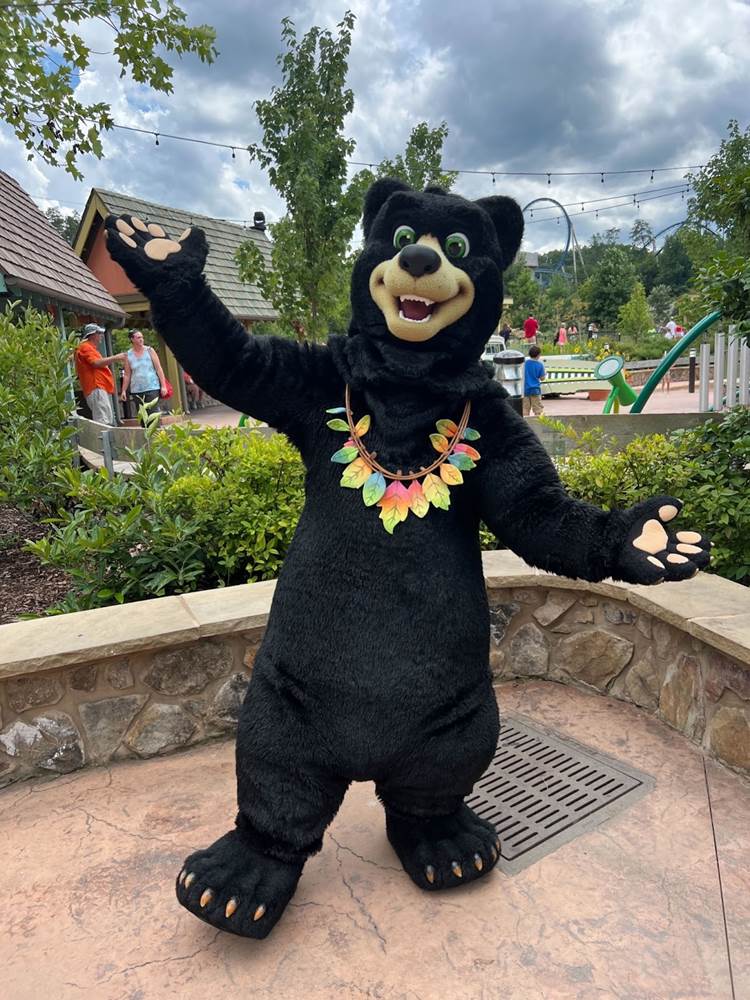 Not "Big Bear" – But Dolly's Friend, Benjamin the Bear

Dolly Parton herself took the stage at the park’s Dreamsong Theater earlier today to announce the newest addition to Dollywood Parks & Resorts, the $25 million Big Bear Mountain, a nearly 4,000 ft. long roller coaster which allows guests to embark on an unforgettable expedition through the Smokies in search of the elusive “Big Bear.” At  3,990 ft. it becomes the longest roller coaster at the Tennessee park, and also marks the expansion of Dollywood’s newest area, Wildwood Grove, which opened in 2019. 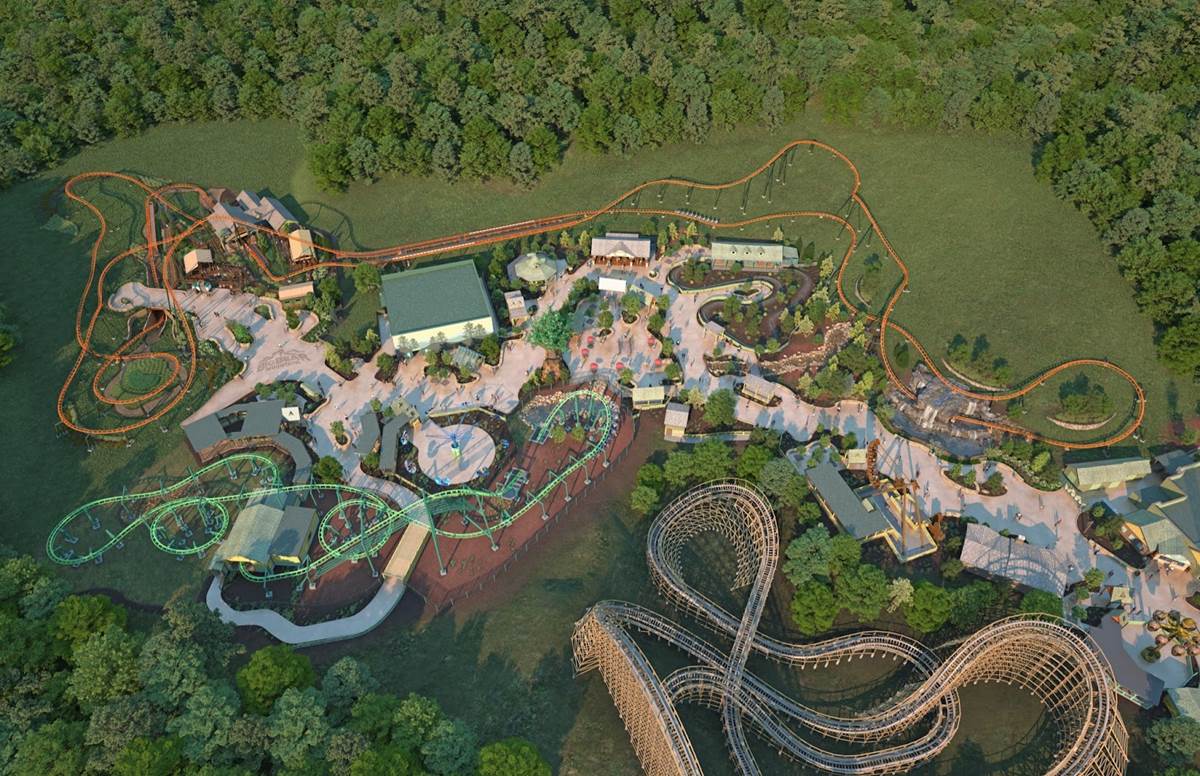 In the rendering above, you can see where the new coaster will be placed in the park, with existing coasters like Thunderhead serving as landmarks. The massive structure that makes up the new family coaster will hug six acres of undulating topography which runs along the border of Wildwood Grove, with riders racing through the wilderness before soaring high above the forest on the search for the legendary bear. Featuring a top speed of 48 mph, Big Bear Mountain takes guests through three separate launches, multiple airtime hills, high-speed carousel turns, and tunnels, including a pass behind a waterfall. 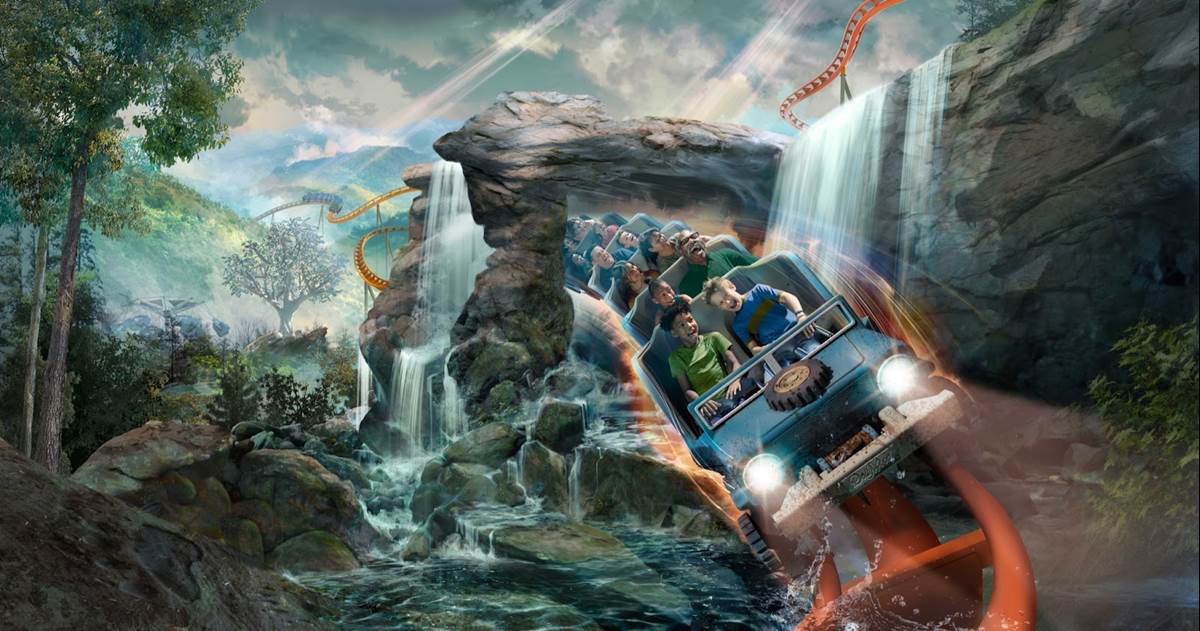 In addition to becoming the longest roller coaster at Dollywood, Big Bear Mountain—built by ride manufacturer Vekoma—also marks the first attraction at the park to feature on-board audio. The sound system provides auditory thrills to match the ride’s dynamic movements as guests come daringly close to Big Bear. The minimum height requirement for Big Bear Mountain is 39″, allowing even younger adventurers to come along for the ride.

Guests visiting the park can already see signs of the coming attraction, quite literally. Scattered throughout the park visitors will notice signs to be on the lookout for “Big Bear.” Over in Wildwood Grove, fences have sprouted up providing a barrier from the construction that will surely begin soon and also provide a visual banner marking the new attraction. 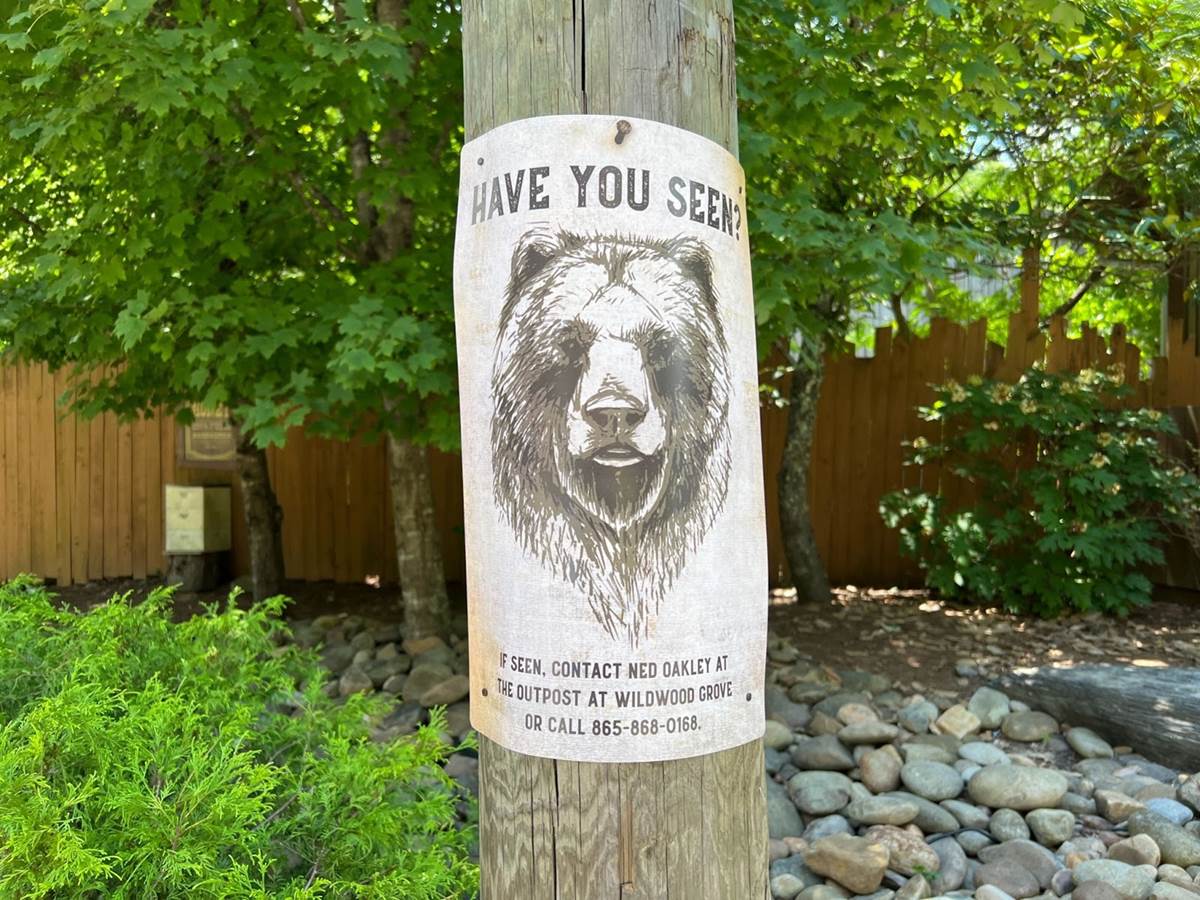 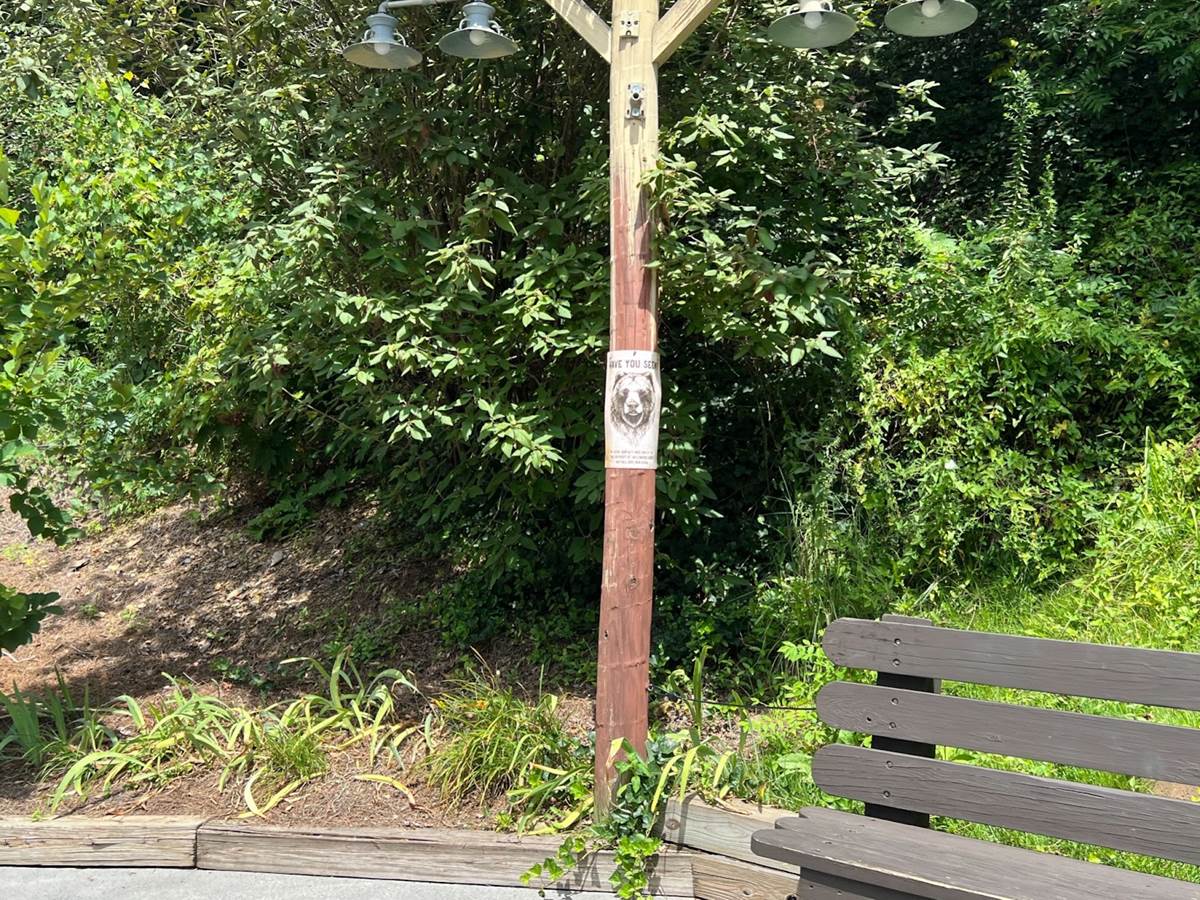 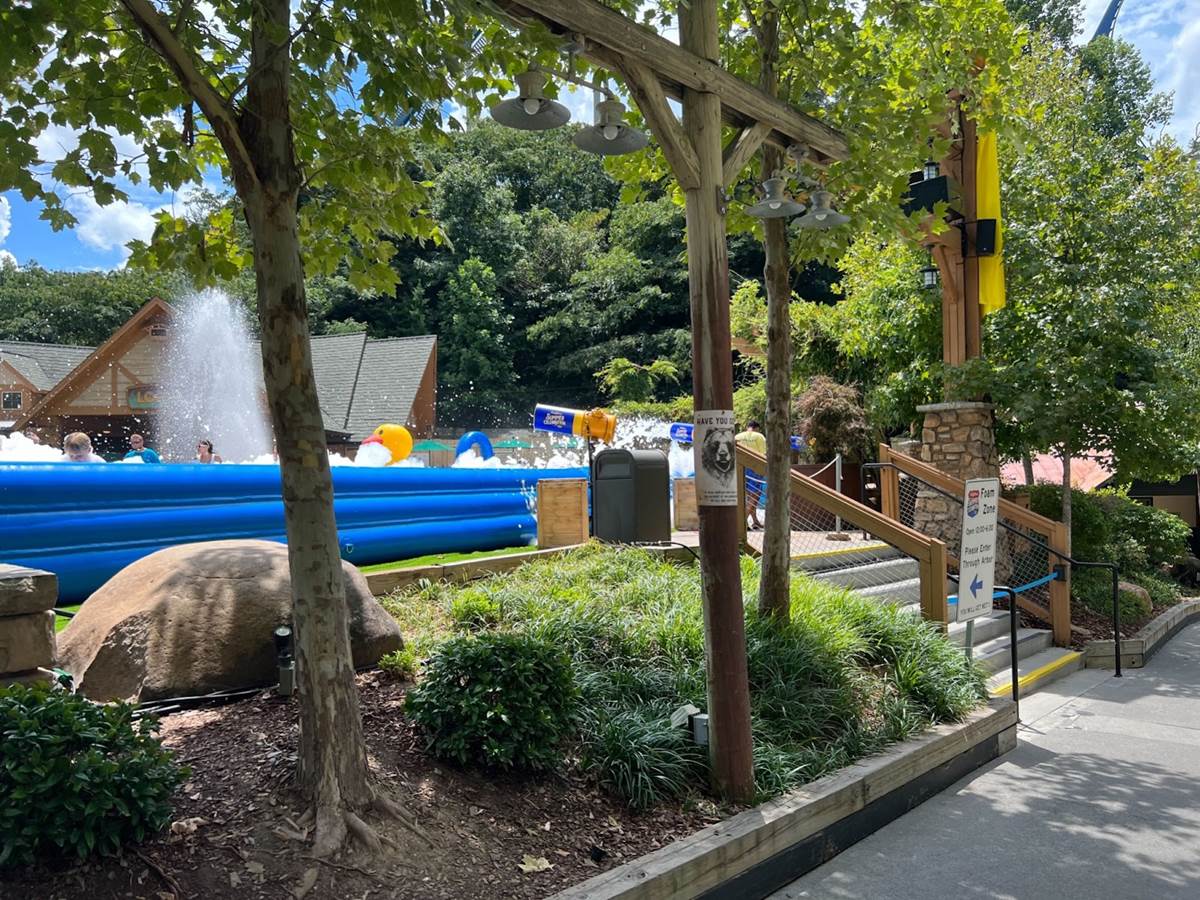 “The Smokies are all about adventure and going exploring,” Dolly Parton said. “I’m excited our guests will be able to head out on their own trip into the Smokies to see if they can find that Big Bear! Whether he’s out there or not, I’m sure they’ll find a lot of memories along the way that they’ll keep forever.”

“Big Bear Mountain is an exciting ride that really is going to be a game changer for us,” said Eugene Naughton, President of the Dollywood Company. “Not only is it the largest coaster we’ve built, but it includes features—like on-board audio—that are new for our company. Big Bear Mountain also expands the footprint of Wildwood Grove and serves as another monumental step in the ongoing investment plan Dolly and I announced in June 2021. She’s keeping me busy. Now that we’ve announced Big Bear Mountain, I’ll start working on the next projects she has lined up for me!” With an anticipated opening date in the spring of 2023, daring adventurers will not have to wait long to join Ned Oakley on his search for Big Bear on Big Bear Mountain. Clues in the earlier social Media Campaign hint at a March 10th opening, but that date was not confirmed at today’s reveal. Regardless, Guests who are ready to join in the excitement can pre-register for a 2023 Dollywood season pass by visiting Dollywood.com/2023SP from Aug. 5- Sept. 30. Those who register during this time receive the guaranteed lowest price on passes, as well as access to an exclusive ride event for Big Bear Mountain in spring of 2023. Pre-registrants are able to purchase 2023 season passes beginning Oct. 17. 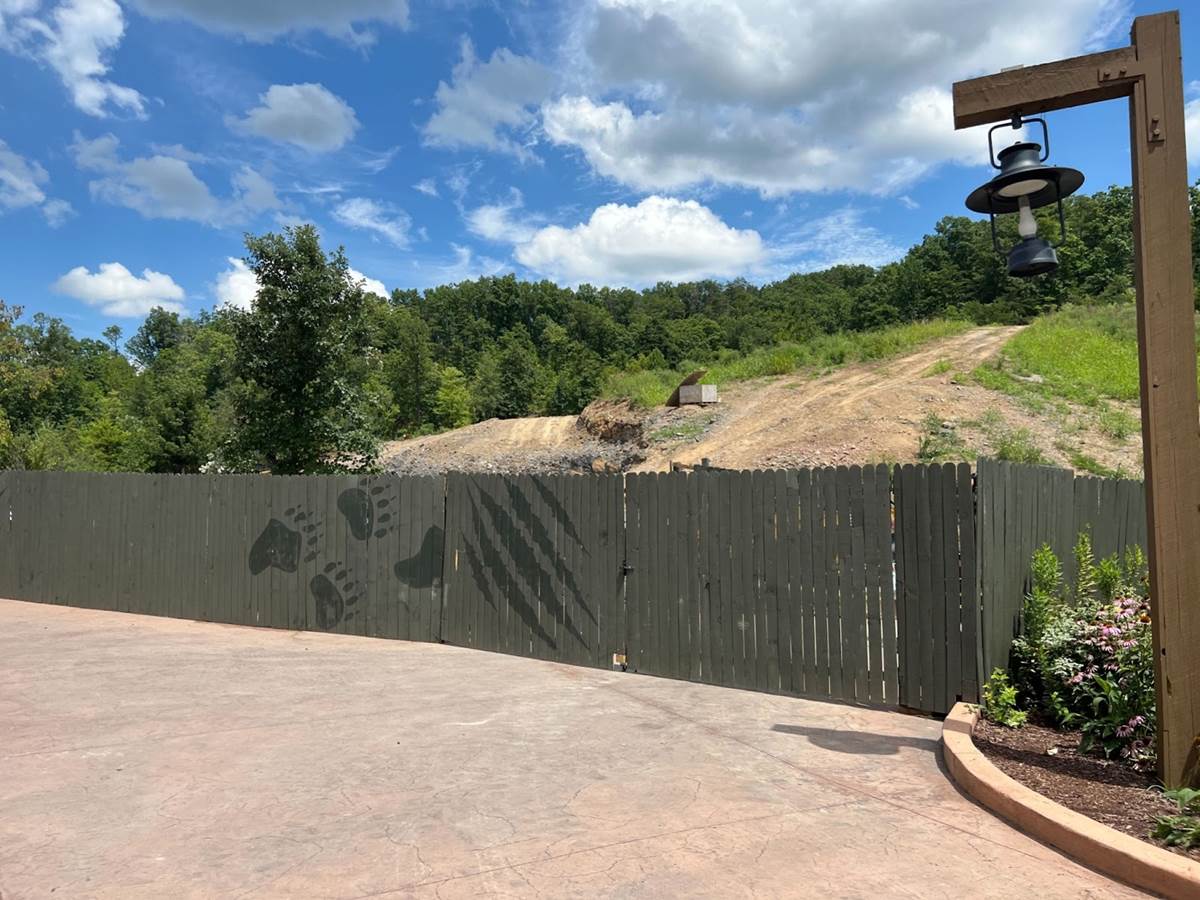 And while everything shared got the crowd excited for NEXT year, there is still plenty of fun to be had THIS year at Dollywood. As 2022 continues, the park will see the conclusion of the Smoky Mountain Summer Celebration this weekend, followed by thousands of pumpkins that glow to life this fall as part of the Harvest Festival presented by Humana (Sept. 23-Oct. 29). The season concludes with the most popular theme park Christmas event in the world, Smoky Mountain Christmas presented by Humana (Nov. 5- Jan. 1, 2023). For a look at what Christmas at Dollywood looked like in 2021, take a look at a replay from our livestream last year below.