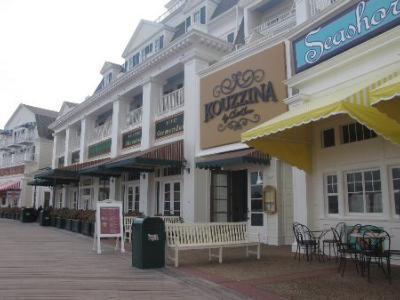 Earlier this summer it was announced The Boardwalk restaurant Spoodles would close and would become a restaurant featuring celebrity chef Cat Cora, Kouzzina. Having grown up in a Greek community in Jackson, MS Cora is known for her blending of Greek cuisine with Southern comfort styles. Upon entering the re-opened location it was not that different from Spoodles which I guess shouldn’t be a surprise as it was closed for only a few weeks and its previous Mediterranean ambiance would fit with cuisine stylings of Chef Cora. Looking over the menu numerous items caught my attention including a number of lamb items (lamb burger, lamb shanks, etc) as well as the traditional Greek items such as avgelenemo soup and saganaki. I had not found the Spoodles offerings as interesting in recent months. The menu also features a glossary for the less familiar options. I appreciated the ability to navigate the options without relying on our server even though hewas friendly and ready to answer our questions about the menu items and ingredients. Hoping to try a variety of the restaurant’s flavors Doobie and I ordered numerous appetizers and no entrees during this visit.

Our drinks were served with a basket of sourdough bread along with butter that was topped with a flavored salt. Our meal began with Spanikopita which was tasty but I found the crispy pastry layers too thick and felt it overpowered the spinach filling. The grape leaves filled with herbed goat cheese were served on a bed of lightly dressed baby spinach accompanied by slices of kalamata olive bread. Goat cheese stuffed grape leaves were always our favorite at the Napa Rose so we were excited to see this item. The Cuzzina grape leaf wrap is grilled and the leaves are lightly crisped with the warm cheese inside. The saganaki is not served on fire but the seared haloumi cheese was warm and tasty, the accompanying lemon when lightly squeezed over the breaded cheese provided a tangy balance to the salt of the cheese. Doobie ordered the brick oven bread. It was a thick, rectangular flatbread topped with a thick layer of carmelized onions, roasted red peppers and some kalamata olives.

I was most looking forward to the avgelenemo soup as I’ve yet to find a suitable replacement for the bowl I’d regularly enjoy at our local Greek restaurant back in So Cal. The liquid portion of the soup is served tableside into a custard style dish  that held a small amount of chicken, some grains of rice and a thinly sliced grilled lemon. The serving seemed surprisingly small even taking theme park prices into consideration and the flat bottomed, high sided dish made it more difficult to enjoy but the chicken and lemon flavors were beautifully balanced. I just wanted more of it. Surprisingly the house salad also caught my eye described as seasonal lettuces, spiced cashews herbs and lemon vinaigrette I hoped it could become a substitute for the Living Lettuces salad no longer offered at Artist Point that was a favorite of mine. Happily it hit the same notes as that favorite with its mix of tangy in lemon vinaigrette and earthy smoky flavor in the spiced cashews and the contrasting textures of the hard crunchy nuts with the softer dressed greens. The most surprising item to arrive was the chilled salt-roasted beets with skordalia. Skordalia was a new food item to me. The menu described the dish as a cold garlic potato puree. As we ordered the item our server reminds us that it would arrive chilled saying some other guests were disappointed when it arrived that way. The dish was beautiful in its presentation with the richly colored beets neatly sitting atop the creamy white skordalia, a simple tower of red and white. The beets were beautifully seasoned but the garlic bite of the skordalia was too strong for me. Its bite and consistency reminded me of horseradish so while we devoured the beets the poor skordalia was mostly untouched. 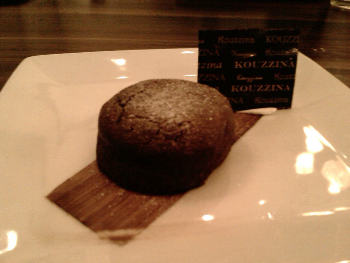 I’m eager to visit Kouzzina for dinner again to sample their entrees the table next to us ordered the chargrilled lamb burger with sweet potato fries and based on my experience with the various appetizers we tried I’m eager to Cinnamon Stewed Chicken with tomatoes, herbed orzo and maritha cheese or the slow cooked lamb shank with oven baked gigantes beans and pepper sauce. However given the tasty desserts offered perhaps sticking with lighter courses is better idea. On this outing we tried the Chocolate Bordino Cake — a warm molten chocolate cake with sweet cream and chocolate shield with the restaurant’s name. Unfortunately while the cake was quite moist and tasty it had sat for a bit too long and was not molten in the center.  Doobie ordered the Loukoumades, freshly made Greek doughnuts drizzled in warm honey and served with creamy vanilla sauce and syrupy strawberry sauce for dipping. The doughnuts are not particularly sweet and are fried in olive oil so they have a different taste than we are used to in a fried dessert but were quite good.

Kouzzina is still a very loud dining experience with the hard wood floors, open kitchen and large tables just as Spoodles was. However they’ve added an additional dose of noise to the cacophony. When items are flambeed in the kitchen the staff cry out Opa! and often the diners return the call. So if you are seeking a quiet meal to unwind after a long day at the theme park I would suggest a different location. Overall I’m excited by the changes at the former Spoodles location. Given how much I enjoyed the various items I tried this evening I’m eager to return to sample more items from the menu.

For many more pictures of the new restaurant, see LP Lotion