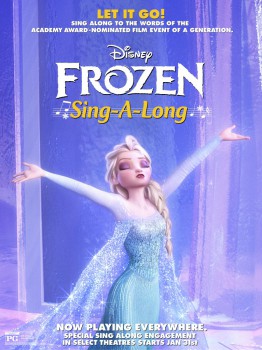 This is not the first time I’ve seen Frozen, nor will it be the last. And as much as I loved seeing Disney’s Golden Globe and Annie award-winning mega-hit the first time around, I couldn’t justify the time to see it again in theaters… until now. Debuting in select theaters nationwide this past Friday, Frozen: Sing-Along offers fans the opportunity to experience the film in a slightly different way.

Disney recently tested interactive movie experiences through Second Screen Live. Starting with a test audience in L.A. with The Nightmare Before Christmas in 2012 and branching out last fall to a handful of theaters across the country with The Little Mermaid. The assumption of these tests was that Disney would be able to extend the theatrical run of recent films by adding new ways to experience them.  While they didn’t plan far enough ahead to launch a Second Screen Live experience for Disney’s highest-grossing animated film of all time (not adjusted for inflation), they do have the luck of having an amazing soundtrack that has sustained a top spot on the Billboard music charts for weeks. The decision to have a sing-along version seems like a no-brainer.

Anyone who has seen a movie in the theater in the past decade has seen numerous PSA’s about theater etiquette. You know, the clip they play after the trailers, but before your film officially begins. The kind where a loud character from an upcoming film answers their cell phone, talks to their friends, and distracts others from watching the film. They usually end up injured or belittled for doing so, resulting in hilarious consequences.

As the audience gathered in our showing on a Saturday afternoon in Emeryville, CA, we couldn’t help but notice that we were the only men unaccompanied by a child. But if Elsa can learn to stop trying to be the person everyone expects her to be, then we can overcome a few strange looks from parents who may not understand the adult Disney fan culture. Following Get a Horse, which is thankfully still attached to the sing-along version, the film begins. There is no warning that you are at a Sing-Along showing prior to the start, so lets all hope that your local theater clearly labeled this showing as such on both your ticket and the marquee (there was at least one family at our showing who wasn’t aware of this, despite the fact that it was properly labeled).

As a child of the late ‘80s/early ’90s, I was first introduced to a plethora of Disney films through their inclusion in the Disney Sing-Along Songs video series.  Following the success of that franchise, sing-alongs have been a staple bonus feature of Disney home entertainment releases since the invention of DVD. I doubt there is a single person in America who is unfamiliar with the concept, yet it did feel wrong that there wasn’t some form of introduction to encourage audience participation. We attended a Fathom Event of a Beauty and the Beast sing-along a few years ago and they had Jordin Sparks introduce the film, along with a plug for her music video of the titular song. And that was a one-time-only event, whereas this is designed to run for at least a week.

The on-screen lyrics were timed well and the bouncing snowflake was a nice touch. The text is most often an Elsa-blue. However, when multiple characters are singing, the text becomes a color that symbolizes them (ex: purple for Anna, Yellow for Hans). But wouldn’t it have been even better if the same color always represented that character?  It was also brought to my attention shortly after our screening that Disney put a sing-along version of Olaf’s In Summer online where the bouncing ball was his head. Wouldn’t it have been cool if the bouncing ball was themed to each song or character?

Overall we really enjoyed the experience of seeing Frozen: Sing-Along. Those of you who have already seen Frozen know that it’s a very powerful film that is not easily forgotten. The fantastic songs are no doubt partially responsible for the film’s theatrical longevity. There was certainly more that Disney could have done to improve the experience, but it doesn’t fail to be exactly what it claims to be.  How well does Frozen work in a sing-along environment? Well, the songs are story-driven, so it can at times be awkward to sing through pivotal moments.  Without giving too much away to those of you who still haven’t seen it, a lot of time passes during the song Do You Want to Build a Snowman? Towards the end of the song, Anna is very emotional. As she sings the last few lines, the character is almost in tears (and members of the audience may be as well).  It felt wrong to sing over moments like that. But at the same time, it was so insanely fun to sing Reindeers Are Better Than People and In Summer along with the audience. The bottom line is that you’re seeing one of the best Disney films in years, so it’s hard to not enjoy the experience. I was surprised that they chose not to put up lyrics during the Demi Lovato cover of Let It Go during the credits, seeing as the last twenty minutes of the film is all action, no singing, which renders the sing-along component useless for the third act. But if you love Frozen and love singing, you will love Frozen: Sing-Along.