Toy Fair: Guardians of the Galaxy

From Marvel, the studio that brought you the global blockbuster franchises of Iron Man, Thor, Captain America and The Avengers, comes a new team—the Guardians of the Galaxy. An action-packed, epic space adventure, Marvel’s “Guardians of the Galaxy” expands the Marvel Cinematic Universe into the cosmos, where brash adventurer Peter Quill finds himself the object of an unrelenting bounty hunt after stealing a mysterious orb coveted by Ronan, a powerful villain with ambitions that threaten the entire universe. To evade the ever-persistent Ronan, Quill is forced into an uneasy truce with a quartet of disparate misfits—Rocket, a gun-toting raccoon, Groot, a tree-like humanoid, the deadly and enigmatic Gamora and the revenge-driven Drax the Destroyer. But when Quill discovers the true power of the orb and the menace it poses to the cosmos, he must do his best to rally his ragtag rivals for a last, desperate stand—with the galaxy’s fate in the balance.

That is how Marvel describes the riskiest film they have made since the original Iron Man.  Featuring a cast of relatively unkown heroes the story takes the Marvel Cinematic Universe away from the comforts of Earth.  When the movie comes out August 1st, many will wonder if the Marvel magic can overcome the unfamiliarity of this film.  But the characteristics of the property that make it a risky film may help the franchises consumer products efforts.  With a range of unique characters, alien objects, and intergalactic spaceship there are a lot of opportuinities for some cool toys.  Disney Consumer Products previewed some of them at the recent Toy Fair.  Check out some highlights. 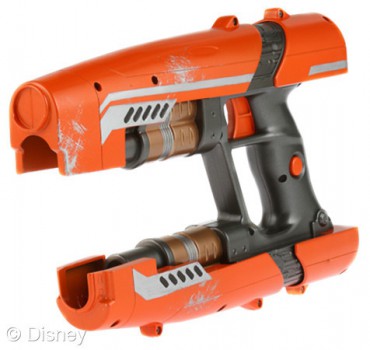 If you kid has a dream of being an intergalactic outlaw, he or she will love the Star-Lord Quad Blaster.  Peter Quill’s signature weapon from the film features double blasters that shoot four NERF darts, all for just $19.99. 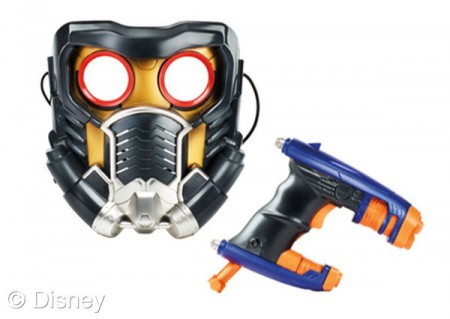 But luckily, if the Quad Blaster is not your style you have another Star-Lord option; the Star-Lord Role Play Set for $14.99.  This set comes with a mask and a blaster that shoots two Nerf darts.  Both sets from Hasbro will be available at retailers this July. 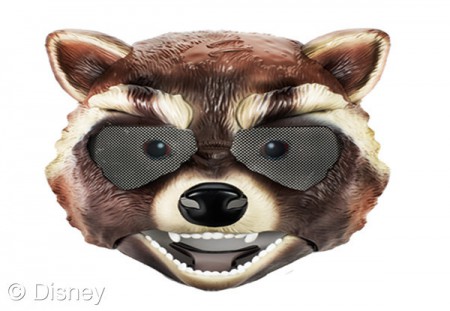 I have always wanted to look like Bradley Cooper… and now I can!  Thanks to the Rocket Raccoon Action Mask.  The mask’s mouth, eyebrows, and ears move to give a high caliber performance, as one would expect from an Oscar nominated actor.  If you buy this toy for $19.99 maybe you will be nominated for next year’s festivities. 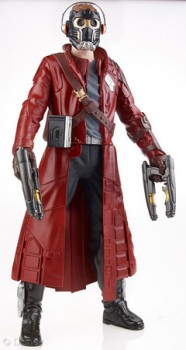 Hasbro’s Battle FX Star-Lord Action Figure is the signature figure from the Guardians of the Galaxy line.  The 12-inch toy features a light-up mask, authentic movie voice and sound effects, signature battle blasters, and accessories.  This deluxe electronic figure has a suggested retail price of $19.99. 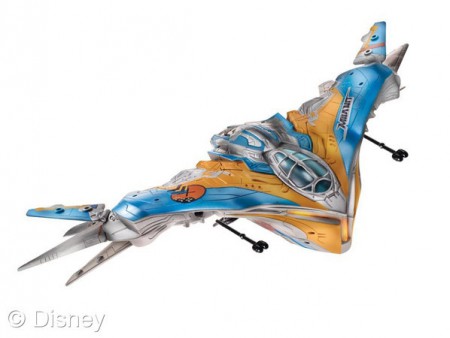 Since the film takes place in space, it makes sense that there are spaceship toys.  Each $14.99 ship comes with a “battle mode” as well as a 2.5-inch scale feature.  Other available figures are compatible with the spaceship toys.  A note: when playing with these toys do not scream.  In space, no one can hear you scream.

Hasbro is offering five different two-packs of Battle Gear Action Figures.  The packs feature the heroes and villains from the film as well as an assortment of battle gear weapons.  Which one is your favorite?  Mine is Groot.

It will be seen if this bizarre off-shoot of the Marvel Universe will resonate with kids.  A talking tree and a gun-wielding raccoon may be a bit outside the norm.  But if there is one thing I have learned about Marvel movies; in Kevin Feige I trust.