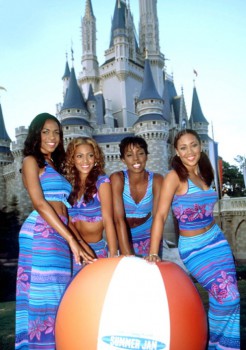 Remember when Disney World was fun and spontaneous? No, that isn’t another knock on MyMagic+ (listen to the LaughingPlace Podcast for discussion on that topic), it is concerning the vast change on events at the parks. When we think of park events, we now think of the usual. Halloween Party, Food and Wine, Christmas Party, Flower and Garden, Star Wars Weekend, etc. are the main things we think of. Yet, do you remember when Trisha Yearwood held a concert at Cinderella Castle? Or when Destiny’s Child sang “Say My Name” on the EPCOT fountain/Splashtacular stage?

What I am getting at is, where are the unique and semi-surprise concerts at the parks?! I have always thought entertainment makes the parks great and when you combine that with Grammy award winning singers and Billboard Number 1 bands, it makes for a more fun experience.

When I mentioned Destiny’s Child, they were a part of the “Walt Disney World Summer Jam Concert” which was aired on ABC from 1999 to 2001. It had these popular singers and groups (including Britney Spears, Christina Aguilera and N*Sync…oh the early 2000’s) showing you around the parks mixed in with them singing their biggest hits around the resort. It was fun to be 1) seeing your favorite musicians at WDW and 2) being in the parks to them as an added bonus to your day.

These cool concert experiences are great fun for everyone. Now, I understand the logistics being a problem at the parks (Remember when the President came? That was one HUGE headache!), but why not do these concert experiences? It gets new faces, many who probably wouldn’t go to Disney in the first place, to enter the turnstiles…scratch that…to enter the park. It also is fun for people who just happen to be at the park that day. Above all else though, it is an excuse to market the parks. Heck, it’s even good for the artists, most likely getting iTunes boosts for their albums and singles.

You film it and air it as a concert special on ABC. It gets people to see the parks and also keeps them happy as they get to see their favorite singers. Many might be saying “People wouldn’t watch a concert on TV,” but every year ABC airs “CMA Fest” in August, and this past year it did fantastic in the ratings.

I am a big proponent of trying new things in the parks, and this seems like a great thing to do. If they would be too scared to make it a spur-of-the-moment/regular park day event, change it into a hard ticket one. Night of Joy does gangbusters every year, why couldn’t they do it for different genres?

I have said many a time that Disney should really do a CMA Country Weekend at the parks. You get nominees for the CMA Awards (that air on ABC, mind you) come to the parks and perform, after signing some autographs. Add some fun little shows and a small parade and you have an event that will attract people in droves. Then, film the bad boy, film some park b-roll clips, stick that thing on ABC before the award ceremony itself and you have yourself a ratings hit for your struggling network. (The video below is this year’s Best New Artist winner, Kacey Musgraves. You have a concert of just the Best New Artist nominees singing 2 songs a piece and that is ratings gold already!)

With the American Idol Experience at Hollywood Studios, why not have a Judges concert at the parks? Jennifer Lopez, Keith Urban and Harry Connick Jr. at the parks joined by their favorite Idols. Market it with the new idol’s trip to the parks, film that puppy and stick in on FOX. They get a ratings hit, you get free Disney promotion. While they’re there, film them doing some clips for the Experience and you have yourself a winner!

What do you all think of concerts in the parks? Let me know your thoughts in the comments!