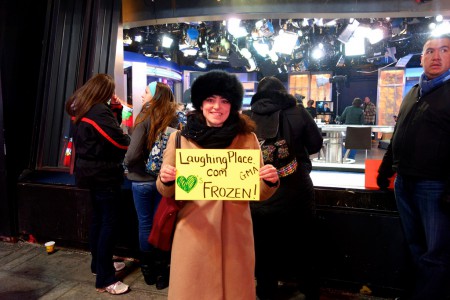 As a “rope dropper” in Walt Disney World, an early morning Disney event is just my speed. Good Morning America hosted an Epic Frozen Sing-a-Long event this morning, with some segments shot live from their Times Square studio. The Frozen Sing-a-Long press release asked that the “Let It Go” fans arrive by 7:45am.  My brain translates that to 6:15am.  For future reference, there’s no need to arrive that early!  The crowd, of mostly adults, grew slowly, and started filling out around 7:30.  It was about 25 degrees, lightly snowing, and NYC Public School children had just returned to class this week, after their winter break.  A tough combination to draw some of Frozen’s biggest pint-sized fans. 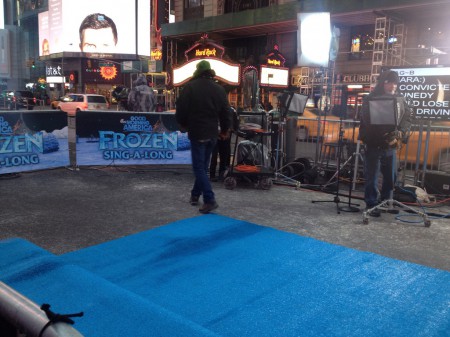 The darling New York Children’s Chorus patiently shuttled in and out of the studio to the fenced off staging area in the middle of Times Square, to  practice and tape segment spots, four times between 6:15am and 8am.

In typical live TV fashion, there was plenty of downtime. I met some great Disney fans, and was even lucky enough to score two hand warmers from a GMA props/lighting employee, who could tell that live tweeting the event was of the utmost importance.  To keep the Frozen fans warm and happy, GMA provides free breakfast; coffee, hot cocoa, Krispy Kreme donuts, and various pastries were offered from a food truck parked outside the studio.  Another truck provided posters and markers to make your own signs, INSIDE the truck – a welcome free, and warm, diversion. 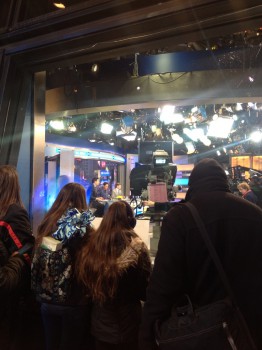 As the live event drew near, a group of US Army men and women joined the choir, as well as a large group of Toys R Us ambassadors, along with Geoffrey, Starbucks ambassadors, and the Bubba Gump Shrimp mascot. All three of these businesses flank the GMA studios in Times Square.  The producers lined up these groups, and a few fans, to line the walkway for the GMA anchors and the three featured singers to access the staging area through. 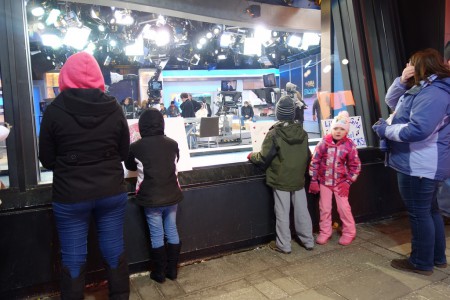 Josh Elliot introduced the outdoor segment and choir, and then it was time to cut to one last commercial, before the sing-a-long.  The rest of the anchors joined; Robin Roberts, Lara Spencer, and George Stephanopoulos.  From this point on, being in the crowd was actually a disadvantage!  Idina Menzel was IN the studio, and the New York Children’s Chorus simply sang when they were on camera, remaining silent during the segments that were broadcasted from around the country.  I fully intended to sing every single word of “Let It Go”, as I do every other day, but I would have been the only one.  The crowd was able to watch most of the broadcast on GMA’s jumbotron, however, so it was still fun. 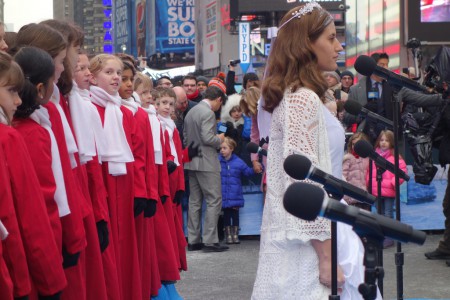 Then, just like that, it was over.  The choir went to school, the grown ups went to work, and I rode the subway back to Brooklyn, listening to the Frozen soundtrack, of course.

You can view what this event was like from the viewer’s perspective by visiting Good Morning America’s website.