‘Guardians’ Gets Promoted Around the Galaxy 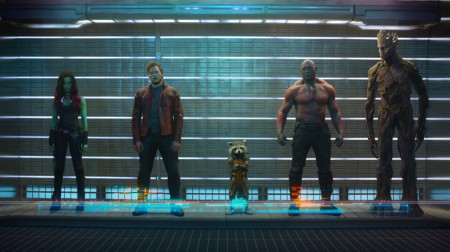 It’s official: Disney has gone into full promo mode for Guardians of the Galaxy.  As part of this marketing machine you can now catch a preview of the film at Disneyland and Disney Hollywood Studio.  In addition to that, this past week Disney held special events at IMAX locations across the country where fans could come see 17 minutes of exclusive footage. 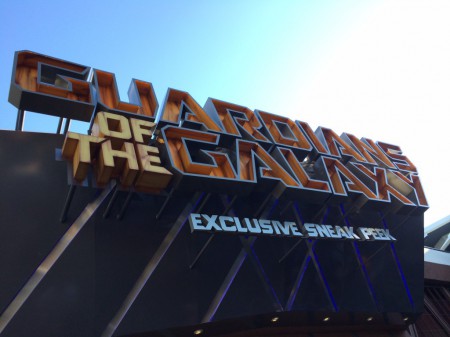 One might assume that these two experiences would probably be fairly similar, but one would be wrong.  Aside from some repeated shots or segments from the trailers that followed each screening, only one scene made its way into both extended sneak peeks. 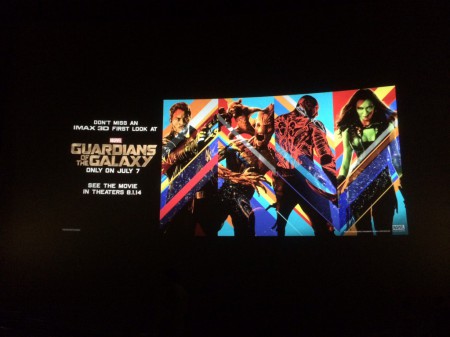 Perhaps the biggest difference between the two were the crowds and the people that comprised them.  The Disneyland screenings are filled with several people that may have just wandered over by happenstance, had a desire to spend 10 minutes out of the sun, or were looking for something to do immediately after learning that Space Mountain was 101.  This was a far cry from the throngs of fanboys at CityWalk who (needlessly) waited hours outside of the theatre and even ponied up $10 to park just to see 17 minutes of a film being released in a month. 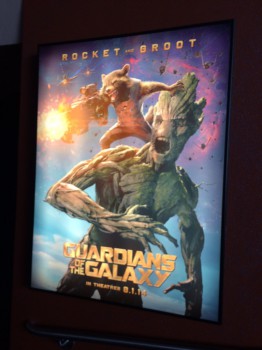 As mentioned, there was little to no overlap in the footage shown at these two events.  Thus, I have now seen around 20 minutes (so probably 1/6?) of the film.  Without too many spoilers, let’s take a look at what we learned from each.

Not that they need to be compared, but I think I enjoyed this scene more than the one shown for IMAX. The clip opens with Peter Quill, AKA legendary outlaw Star-Lord (who?!), sneaking into a run down building to steal some sort of glowing orb thing… I’m sure they’ll explain it later. 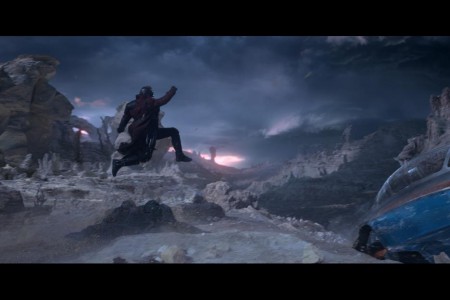 While it starts off as any other sci-fi/action film, it quickly brings us what we’ve come to expect from Guardians following their phenomenal teaser trailers.  As Quill takes off his mask and begins his search, he hits “play” on his Walkman and sings/dances his way through the terrain to the sounds of “Come and Get Your Love.”

As shown in the first teaser, he is nearly captured while stealing the item by people who apparently are unaware of his legendary status and is forced to make his escape.

If the scene isn’t the first in the film it must be very close to the beginning.  Heck, the title even comes up in the middle of it.  Overall, this scene further builds on the tone that’s been established in the previews thus far.  It’s quirky, it’s fun, but it’s also got the action you’d look for in this type of film.

While the Disneyland and DHS clips focused mostly on Star-Lord and his “Awesome Mix Vol. 1,”  the sequence shown to IMAX audiences showcased the whole team. 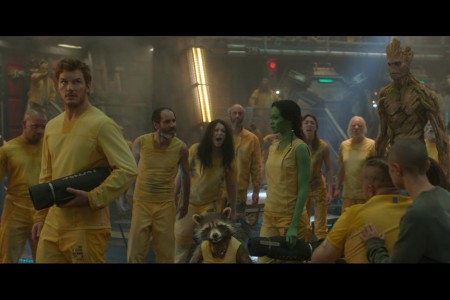 Opening with the line-up/rap sheet scene made famous from the film’s teaser, it goes on to show us the whole team (Quill, Gamora, Drax, Groot, and Rocket Raccoon) in their experience in prison.  Unlike “Orange is the New Black,” the Guardians make little effort to fit in and instead begin formulating an escape plan.

While this scene had a lot more action than the theme park clip, there was still a great amount of humor, including a hilarious exchange where we learn that Drax is an extremely literal being. 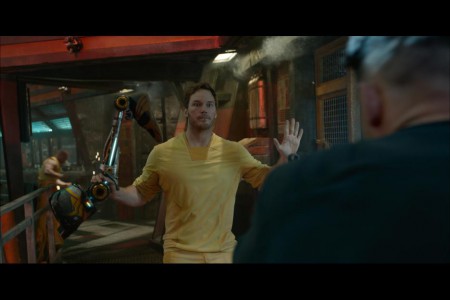 If anyone was doubting the awesomeness of Groot, this scene will set you straight.   While Rocket gets a lot of the love, his plant friend/muscle will soon have his own fan club after the film premiers August 1st.

I cannot wait for this film!  Even if I have seen a full reel (as if any theatre still uses film…), I’m already anxious to do it all again.  In fact, as I write this, I have just returned from seeing the Disneyland preview for a second and third time.

That being said, watching it with the Disneyland audience makes me slightly worried about the film’s potential.  After the Annual Passholder preview, a couple behind me seemed perplexed and announced that there was no amount of money you could pay them to see the film.

As great as hype is, it can also be dangerous when it doesn’t translate into box office sales.  Suddenly, what would have been considered a win (pulling a sci-fi comic book film starring a machine gun wielding raccoon and his talking trisyllabic tree pal) looks like a failure because of expectations.

So what are the Guardians to do?  Like Star-Lord said: “Something good.  Something bad…  Bit of both.”