By now I am sure you have seen a hundred different reviews of this event, so I thank you for reading one more, but I felt I had to give it some time to sink in before I really could give the event it’s full credit. Unfortunately as time passed it didn’t get better… The event which was a extended version of last years Friday the 13th Limited Time Magic event, did one thing better than last year, it took 67 dollars from my pocket. At last years event, which was free to park guests, it was over crowded and people complained about not being able to see some of the 13 villains that were brought out for the night, so Disney made it a hard ticket event and upped the number to 50! 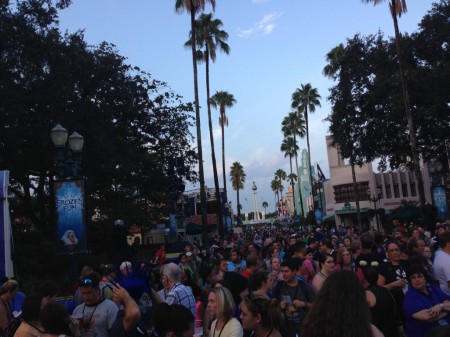 More villains does not a better night make! The evening started with the opening as seen above which took place at 8pm, the start of the 5 hour event, but to get a good place to see the ceremony I got a spot an hour and a half before. The opening was fun even with the glossing over some of the villains due to them being in place already. Once the opening was done to maximize the time I headed right to the first Oogie Boogie’s Freaky Funhouse Show which was filled to capacity as I walked up. 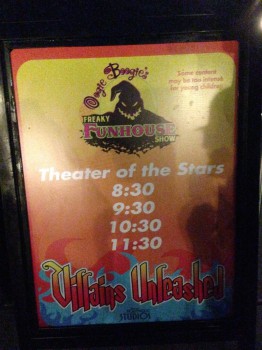 Instead of waiting for the next show I decided to head to the late addition to the event, the Guardians of the Galaxy Awesome Mix Tape Dance Party featuring the debut of the first Marvel characters in a Walt Disney World park, Star-Lord and Gamora. This “dance party” was a DJ playing some of the best of the 70’s and 80’s music and Star-Lord and Gamora walking back and forth behind a barricade with so much fog pumping in to keep the place cool guests had to leave because they were having a hard time breathing. 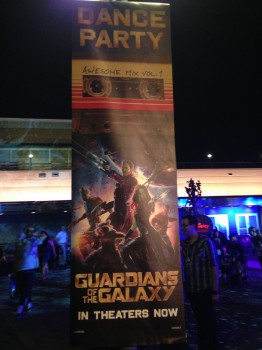 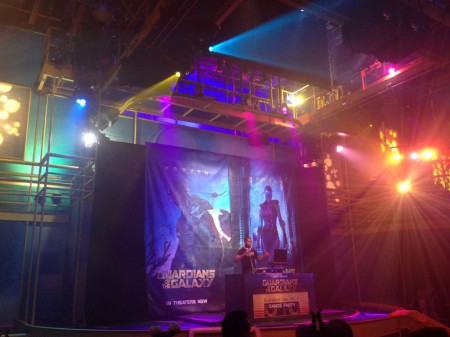 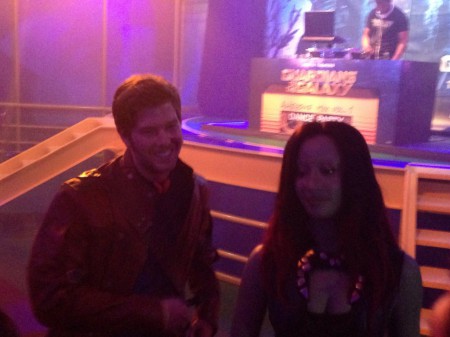 Once the shock of how underwhelming the “dance party” was my main goal was to get photos with some of the lesser/never seen villains, get some of the event merchandise, and try and catch Oogie Boogie’s show and Fantasmic(which was advertised as having a special pre-show for the evening). First stop was the Prop Shop, the only location seeing event merch, where I came across what was being said to be an hour and a half wait, which I bypassed due to time being so short. 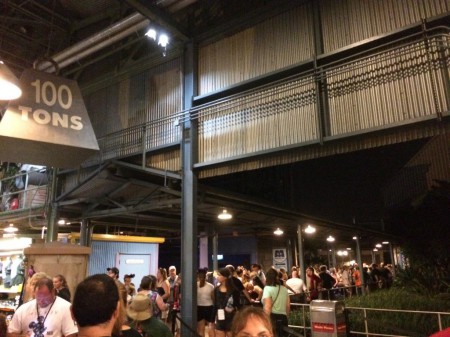 What did become the first stop was the line for the first time in the states appearance of Captain Gantu from Lilo & Stitch and Dr. Hämsterviel from the Lilo & Stitch the Series, they were set up in the same area but with alternating half hour set times and queues to keep guesting moving. Arriving at 9pm before the first set of Dr. Hämsterviel we were told by a cast member both lines were about the same so I jumped in the line for Gantu as he was always one of the more fun villains and very impressive in person, also as the line started to grow a cast member told me that Constantine’s queue had closed almost at 8:30 for the evening so it would not even be worth trying. As the Dr. came out his line didn’t seem to move very fast till toward the end of his set so I figured it could be a bit of a wait for Gantu.. fast forward to 10:30 and Gantu’s second set and almost fighting to see him before he was done with that set. While standing in the line I noticed the main hold up was the splitting of the groups for photos with the characters where what should have been 1 or 2 photos turned into 6…group, couple, different couple, singles which drew out the line even longer then it should. 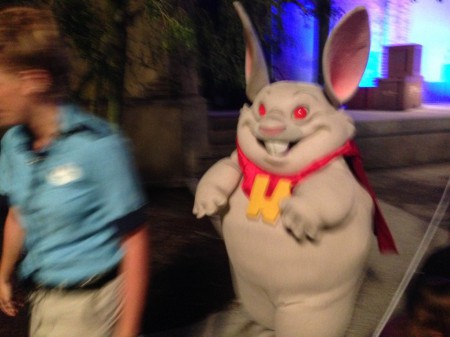 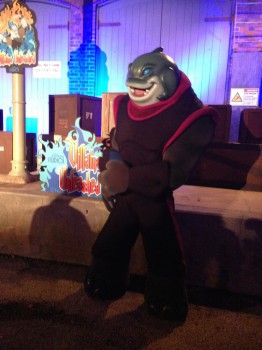 Once I had my one character shot I proceeded down the Streets of America, which had again some of the hard to find villains with queues but more of the common villains walking around which was fun to watch except the large crowds forcing almost fights for “next photo” time.

After finally making it past the dance party of the main stage with DJ IGG Nite and some of the villains dance party I made it to what has to be one of the highlights of the night, Oogie Boogie’s Freaky Funhouse Show. This was a stretch for a Disney show, it basically was a freak show with a sword swallower, a crossbow couple, and a fire eater all hosted by Oogie Boogie. It was a fun show but like I said a stretch for Disney with a lot of people not knowing what to make of it. 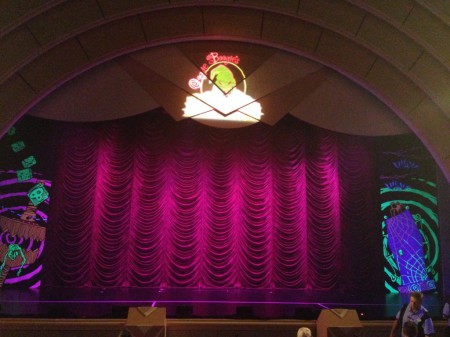 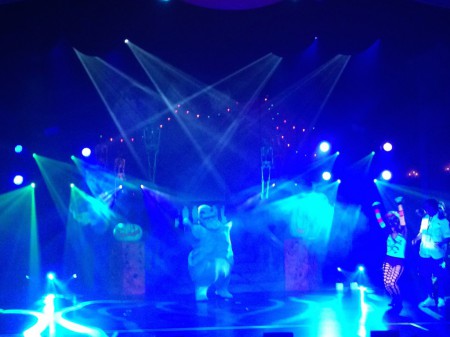 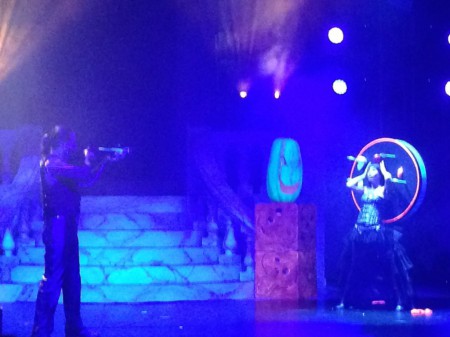 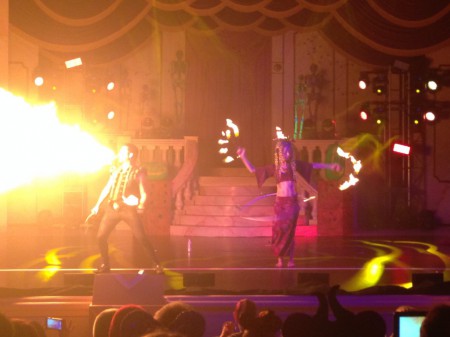 So now after seeing the opening event, one villain, and the one show it was time to find a spot for the Villainy in the Sky fireworks. As I headed toward Hollywood Blvd. I could see most of the prime viewing was gone so found the best view I could and with a side view enjoyed what has to be one of the best firework shows in any Disney park!

The event over all, while better than last years, was oversold and not nearly enough time to see a quarter of the villains or in my case more than 1! The merchandise sold out while most were in line and the speciality food options (hot dogs with special buns) sold out also. The entertainment offerings were great and really well done, just not enough of them or enough guest control to move guest through the photo lines. I am sure this will become an event next year for more then one night, it would take a lot for me to pay to go to it again without a promise of a smaller crowd!

As the crowd headed out after the stroke of 1am we were “given” our parting gifts of a goody bag with buttons and two autograph cards and separately the large autograph card, but i know a lot of people only got one of the other due to misinformation given to guest as walking through the gates. 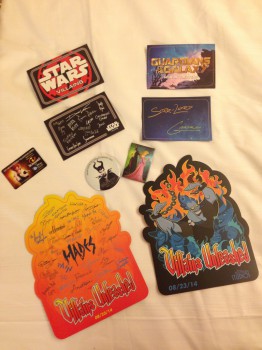