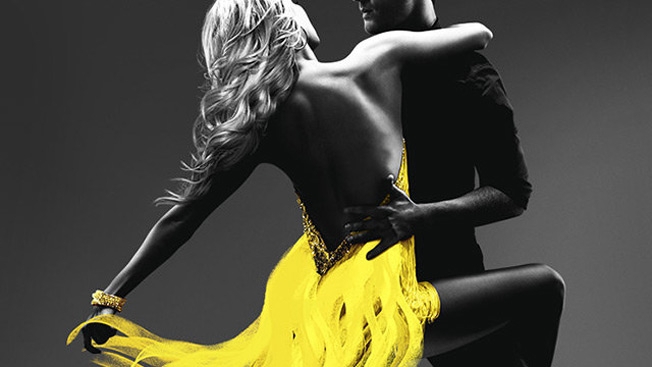 It was movie night in the ballroom and we were treated to a Marilyn Monroe themed opening…but set to the Pharrell song about the actress. That was a duo I never needed in my life. Kevin Hart was introduced as the guest judge for the week, after being paraded out by the pros, and sat in Len’s seat WHICH IS JUST WRONG! Anyway, we were told that an elimination will happen, even though Tavis and Sharna were voted off. Think of it as a double elimination (as both used last week’s scores and votes) just separated over two days.

Randy and Karina are the first pair in jeopardy, and they also danced first, dancing a Paso to “Rocky,” with Karina saying “I want you to make half of the people in the front row pregnant.” Now that’s what I call motivation! (I think) He looked, frankly, like an idiot who was scarily forceful, not fluid at all and stressed as hell. Julianne hates it (duh) and Carrie Ann was happy he upped his intensity, but still wanted more finesse (some would say, the “Best of Both Worlds”…just ask Hannah Montana). She also ALMOST saw a lift, but thank god she didn’t, or we would have to bring out our favorite meme. Kevin loved it, but he did give scores similar to the judges, expect for two special occasions when he SO did the right thing (more on that later). 2 SEHVENs (from Carrie Ann and Kevin) and 2 sixes. Side note, the entire night Kevin screamed his scores and it was a flipping riot.

Alfonso and Witney danced a Quickstep to “Austin Powers: Goldmember,” in which he showed us some amazing foot work, but some hesitant posture and upper body lines. However, it was still a very good dance. Bruno wants to see a better ballroom dance and Kevin finds it rude they put a black man in a velvet suit. Oh, and Alfonso thinks he has a large buttocks. Eights from all the judges.

Kevin Hart came back from break dancing with his upcoming co-star Josh Gad to the hand jive. Why not.

Betsey and Tony danced a Contemporary routine to “Ghost” to which Betsey said “It’s like the sky diving I never wanted to do” and from it, she needs a drink. BETSEY I LOVE YOU WITH ALL OF MY HEART! While the dance gave me bad memories from the musical version of the show (Do yourself and never look it up. Ever.) I found it a beautiful routine, with her flexibility at an all-time high and her lines absolutely killer (even though the judges wanted to see her toes pointed). Kevin Hart showed some interest in hooking up with Betsey and Bruno proclaimed “Bend it Like Betsey” should be the sequel to the Keira Knightly soccer movie, which I am totally fine with. 2 SEHVENs from Carrie Ann and Bruno, a six from Julianne, and a freaking NINE from Kevin (maybe I am starting to like guest judges after all…).

“Clap Happy Movie Night” was a term coined by Tom that I wholeheartedly agree with.

Lea and Artem danced a Cha Cha to “Back to the Future”…her own movie…and in rehearsal, they came back from the future, so current them hopped in a delorean to the ballroom to dance at the prom from the film. It was too meta for anyone’s good. Either way, they had a small hand slip, but their great footwork that was tight and gorgeous made up for it. Great dance, but Carrie Ann didn’t like it whatsoever. Maybe she just prefers the sequel? A SEHVEN from Carrie Ann and eights from the rest of the judges.

Emma and Michael (who are safe…I may have just puked in my mouth a little) danced a waltz to “Robin Hood”. It was his best dance yet, I’ll give him that, but he waltzes how I “waltz” to my fridge to grab a snack. So, badly. He loves dancing, so he always tries to cover for himself and he always makes car analogies. I’m over it. Yes, I realize I have no heart…sue me. All the judges spoke of his dance as if Meryl and Maks returned, but they all gave him SEHVENs, so that was funny.

Cheryl and Antonio, who are in jeopardy, danced a Foxtrot to “Guardians of the Galaxy,” I’m assuming as an excuse to get some classic 70s music into the evening, as they just danced to “Ain’t No Mountain High Enough”. “Shh, don’t talk, just dance” was a quote from Cheryl during rehearsals that should be on t-shirts and sold in the Dancing with the Stars store. It was, in my eyes, his best dance yet, with good footwork and the most fluid he’s been yet. Carrie Ann wants him to breathe, while Julianne and Bruno demonstrated how he should turn to the hip, not his whole body. Erin agrees with him being the best, because we agree on everything and I love her. 3 SEHVENs and an eight from Bruno.

Sadie and Mark danced an absolutely adorable and beautiful waltz to the score of “UP”. She used balloons in rehearsal to help her posture, and it wasn’t completely amazing throughout, but she is getting the right idea. Yet, who the hell cares, because she ended the dance by FLYING AWAY ON BALLOONS! I can’t even. It was too much to handle. Julianne wants less airy arms and suggests thinking about resistance in water, but SHE DIDN’T DANCE TO “FINDING NEMO” SHE DANCED TO “UP” SO AIRY IS NECESSARY! Geez, Louise. 4 eights from the judges. Erin’s comment to Sadie was simply “Ugh, I love you” to which I yelled at the TV “Ugh, Erin, I LOVE YOU!” then questioned whether people on my floor could hear me.

Jonathan and Alison, the final couple in jeopardy, danced a Tango to “Great Gatsby”. She annoyed me to no end by complaining about not being understood. Jonathan annoyed me by never shutting up about his support for her. Then, she danced beautifully, yet Jonathan looked sloppy and stupid paired with her. Then, they received 4 eights. #OverIt. NEXT!

Janel and Val danced a Jazz routine to “West Side Story”, but the rehearsal had some bumps, as some legal trouble allowed them to use the song, but they couldn’t replicate any moves from the film. So, here’s where my problem comes in, they danced to the song “America”. I love that song, it is my favorite from the musical, but the singing was so absolutely awful, like weirdly terrible for the show, that I was so taken aback that I barely could watch the performance. Apparently, it was incredible, as the judges gave her the first PERFECT SCORE of the season, and what I saw was nice, but that singing y’all. Woof.

Tony and Peta danced a Tango to “Scent of a Woman” and man, he just gets better and better every week. After declaring Peta “Smells Like Maks,” which had me dying, he did a great leg flick and a crazy good ending as part of his routine. Overall, he is rocking it out. The #PetaPosse strikes again, as she can do no wrong. 3 eights and a TEN from Kevin (again, I agree with Kevin). “I owe Kevin something,” which I feel like is something medicinal when coming from Tommy, if ya picking up what I’m throwing down.

Bethany and Derek danced a Jazz routine to “Singin’ in the Rain” and I was worried, because Derek was pissing me off to no end in rehearsal. Since Gene Kelly is his idol, his very bratty nature when choreographing the dance was highly annoying. Then Gene’s wife came out and the random factor increased. However, Bethany and Derek went out on that floor and absolutely slayed. Best dance of the night and the season, thus far. Classic, gorgeous, and seamless. AND REAL RAIN! Just so good. A PERFECT SCORE from the judges.

Randy and Karina went home and everyone went “Can we sacrifice Michael a la “American Horror Story: Coven”? Let me know your thoughts from the night!