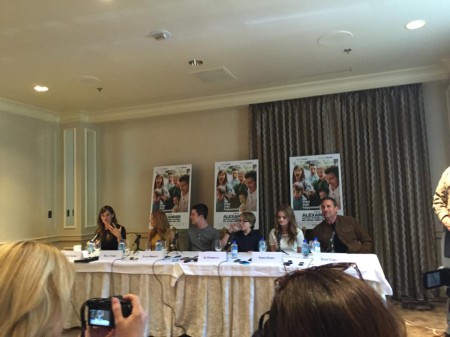 On September 27th, I attended my first press junket. I’ve always seen clips from these on Extra and Entertainment Tonight, but I never dreamed that I would attend one. The night before the junket, I got to see the film in the Walt Disney Theater on the studio lot. To my delight, the path security had laid out for us allowed a stroll through the hallowed halls of the original Animation Building where everything from Pinocchio through The Great Mouse Detective was made. And the film ended up becoming an unexpected surprise. It far exceeded my expectations to the point of being one of my favorite films of 2014 (you can read all about it in my full review coming soon to a laughingplace.com near you).

The next morning, I arrived at the Four Seasons Hotel in Beverly Hills (swanky!). Our rental car was parked valet, which was comped by Disney (swanky!). I was treated to complimentary brunch on Disney’s dime (swanky!). I secured a second row seat in the room for over an hour (sw… oh wait…). I quickly made friends with a few of the bloggers and media people and we chatted about the film until the moderator began.

The presentation was split into two parts. The first was with the creative team, as we were introduced to writer Rob Lieber, producers Dan Levine and Lisa Henson, and director Miguel Arteta. Through their answers to questions from press, they painted a picture of a creative team trying to reinvigorate the seemingly deceased genre of live-action family films. Lieber made it clear that very little changes were made to the script to accommodate casting choices or the studio the film ended up at. Arteta in particular was inspired by the films of John Hughes and was hoping to capture some of that magic in this film. Arteta had also worked with Steve Carell before on an episode of The Office called “Diwali.”

I had the opportunity to ask a question during this segment. In the film, daughter Emily is starring in her school’s production of Peter Pan and it is obviously the Disney version (it features the song “You Can Fly, You Can Fly, You Can Fly”). I asked if they had always planned for this to be the Disney version, or if it was a different version of Pan before Disney was involved (the Mary Martin version, perhaps). Writer Rob Lieber answered my question by saying in the original script he had written his own dialogue for the play. He didn’t go into detail about Disney requesting the song to be added.

After the creative team left the room, we had a few minutes to stretch before the cast came in to talk and answer questions. This included Steve Carell, Jennifer Garner, the actors who play their three kids (Ed Oxenbould, Dylan Minnette and Kerris Dorsey), and Disney Channel star Bella Thorne. When asked if any of the cast had bad days on set, Jennifer Garner stepped up to describe a miserable day shooting outdoors on location with high heat. Steve Carell instantly started mocking her answer and you could tell this cast really enjoyed working together. The kids talked about how easy it was to feel like a family because they all got along so well. Ed, who plays Alexander, is from Australia and it was interesting to hear him speak with his natural accent after hearing him nail our American accent so perfectly in the film. Jennifer Garner also talked about how amazing it was to work with Dick Van Dyke during his cameo in the film. Bella Thorne also shared how hard it was to play a mean character.

I didn’t get to ask my question, which is alright because somebody else asked one close to it. Kerris Dorsey and her sister wrote and perform a song for the end credits and Dylan Minnette’s band The Narwhals have a song on the soundtrack as well. I was curious how that came about. For Dorsey, director Miguel Arteta called her months after filming was done and asked if she would be interested in doing a song since he knew she writes music. For Minnette, the song was already written and Arteta thought it would be a good fit. I do find it odd that Bella Thorne, who has an upcoming album with Disney’s Hollywood Records, is absent from the soundtrack, but she didn’t comment on it.

The real takeaway from this press conference was that the cast and crew loved working together and you can see that chemistry in the final film. Steve Carrel hopes this sets a trend, reinvigorating live-action family films as a successful genre.