The Pros and Cons of a Phenomenon This past week America celebrated Thanksgiving where many count their blessings by over-eating.  Then there’s Black Friday where we lose our minds to take advantage of the hot deals.  Both days could be described as “too much of a good thing” which is why it seems perfect to me that Frozen also celebrated its one year anniversary this week.

Like many I know, I was trepidatious when it came to Frozen.  When my friend and I first saw the teaser attached to Monsters University, we remarked that it looked less like the classic Disney princess tales and more like Ice Age.  Alas the film was everything you could have wanted and the box office reflected this.

I remember reading Box Office Mojo a few days before the film’s release (as I regularly do) and saw them say of Frozen, “It’s tough to imagine it matching Tangled‘s $68.7 million.”  Oops.  Frozen actually made almost as much over the three-day weekend as Tangled made in five and ended up taking in over $93 million by the end of the holiday weekend.  By the end of its run, Frozen doubled Tangled box office total, making just over $400 million.

By that time, lines to meet Anna and Elsa were reaching insane levels on both coasts, the character’s dresses were selling out as soon as they hit the racks, and rumors were swirling not only about a sequel to the film but also a Broadway stage production.  This was also about the time people began to speculate on how Frozen would make its way into the parks.  Actually, not just “how” but “how soon?”

The first major announcement aside from the meet and greet shuffling at Walt Disney World was the introduction of Frozen Summer Fun LIVE! at Disney Hollywood Studios that included a parade, stage show, play area, merchandising, and a fireworks spectacular.  This is all fine and good since 1) DHS is themed to movies so really anything is fair game and 2) DHS is also going through an identity crisis and could use some attractions to distract from all the others they are shuttering.  Of course the festivities were extended beyond the titular summer, and though the offerings have been downscaled, the stage show and merchandising continue.

The Frozen offerings in Hollywood Studios were partially viewed as a way to keep guests in Walt Disney World and away from the recently opened Diagon Alley expansion of The Wizarding World of Harry Potter over in Universal.  Just like in that series’ third film, The Prisoner of Azkaban, this is when I began to sing to myself, “Something wicked this way comes.”

It’s interesting to think about how “New Fantasyland” would have turned out if they had just waited a couple of extra years until Frozen had hit.  Would there be a Little Mermaid ride there today?  Or would it have been the Mine Train to get the ax?  Unfortunately for Disney, the literally just completed Fantasyland expansion (apparently) left no room for their rising stars.  So, instead, they turned their sights to Epcot and after months of every Disney fan knowing what they were going to decide, they pulled the trigger on their questionable plan.

Whatever you think of the Maelstrom or Frozen, hear me out on my view of the whole matter.  Epcot has always been a place of edu-tainment, and I believe keeping this spirit alive is in Disney’s best interest.  Through the years, World Showcase has been successful in integrating characters where as they were previously banned when the park opened.  To me, their inclusion doesn’t just make the park more tourist friendly, but serves as a point of entry for children and adults to learn about the real country and culture that the characters come from.  Even when they added The Three Caballeros to the Mexico Pavillon ride, the attraction still sought to show the beautiful sites and exciting culture of our neighbors to the south.

This is why I had no problem with Anna and Elsa doing meet and greets in Norway.  Sure Arendelle wasn’t Norway, but the inspiration the country had on the fictional version was enough to make this a win for the Norwegian Chamber of Commerce.  Having young girls meet the popular princesses (well, one princess and one queen) and then learning about another culture sounds exactly like Epcot edu-tainment to me. 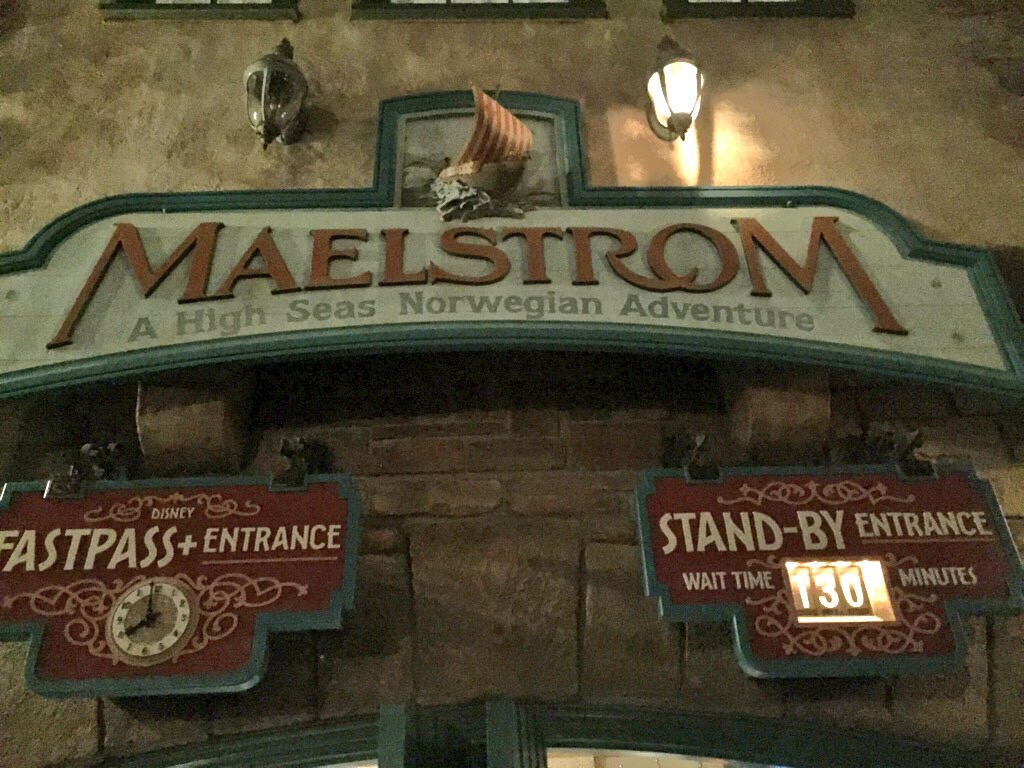 On the other hand, turning the Maelstrom into a Frozen attraction, as it has been argued by of my friend, does a disservice to both the Norway Pavillon as well as Frozen.  Obviously we have no idea what this attraction will be exactly, but it stands to reason that it won’t be the cast of the film teaching you about Norwegian folklore and this is a shame.  By turning Norway into Arendelle, Disney is compromising the integrity of World Showcase and its purpose.  I recently joked that I really want Big Hero 6 to do well, but I also would like to keep Japan as Japan and not San Fransokyo.

My argument isn’t even really about Maelstrom itself.  I’ve never been on Stitch’s Great Escape and I will never go on it as long as I can help it.  However, if Disney wanted to replace it with a Frozen attraction, I’d strongly object since Frozen has no business in Tomorrowland — a land that already has some thematic issues.  Like I said, I’m more concerned about the overall impact this will have on Epcot and World Showcase going forward.  Of course I’ll have to reserve my final judgement until the attraction opens.

When the Maelstrom controversy exploded, there were many who saw no problem with it and saw the detractors as hating on Frozen.  Trust me, I love Frozen.  I saw it multiple times in theatres, met Anna and Elsa, and while on my trip to Tokyo earlier this year I made a point to pick up both the Japanese and Korean versions of the soundtrack.  To avoid annoying Twitter fights, I never said this but I always thought, “Just wait until Frozen takes away something you love.”

That foreshadowing phrase came to fruition recently as Disney announced that the Mad T Party in Disney California Adventure (which, for some reason, attracted large weekly crowds) would be coming to an end.  They never said that Frozen attractions akin to the DHS promotion were coming, but please.  Presumably this plan may have also lead to the death of DCA’s Muppet*Vision 3D, which closed “temporarily” without much notice or many noticing.

When Carsland was built, my friend Aaron Wallace made a point that really stuck with me.  He said that if Walt Disney thought the way Bob Iger did, Frontierland would have been called Davy Crockett Land.  The point being that the Disney of late loves to pounce on the “new hotness” — to borrow a phrase from Will Smith — at the expense of evergreen theming.

On Thanksgiving, did you finish that last mound of mashed potatoes and then sit back wondering if that might have been too much too fast?  How long until Disney does that with Frozen?

Thanks for reading! Please note that the title to this should read “The Pros and Cons of a Phenomenon (Do do dodo do)”

Be sure to follow Kyle on Twitter: @KyleBurbank and come back every Saturday for another entry into The E-Ticket Life!