Is there any holiday associated with more humiliation than Valentine’s Day?  I’d even argue that the often cruel jokes of April Fools Day can’t hold a candle to the entire ruse of February the 14th.  Surely you now think these are the words of a bitter single, but I assure you I am happily married — it’s just that I recall all the terrible memories from that awkward stage in between elementary school where everyone shared cards and candies to being an adult old enough to not worry about such a silly holiday.

As I started think about Valentine’s Day, I realized there were a number of connections I could make between the day and Disney’s (apostrophe s) California Adventure in its original form.  I don’t have another sentence of segue, so let’s just jump into my list.

As I alluded to in my title, Valentine’s Day and DCA have the month of February in common for their origination.  Valentine’s had been celebrated on February 14th for some time ( I didn’t feel like researching it) and Disney’s California Adventure officially opened its gates on February 8th, 2001.  It seems to be a strange month to open a theme park, but maybe the play was to get people to fall in love with the park given the proximity to the self-proclaimed day of romance.  Or maybe they just figured that So Cal weather in February is as beautiful as any other time.

2) Excessive Use of Puns

Who doesn’t love a good pun? Ok, most people don’t, but Valentine’s cards are like honey badgers in this regard and continue to shovel out they pseudo-clever catchphrases regardless. One exception being this Disney Parks-inspired one created by my friend Aaron Wallace: 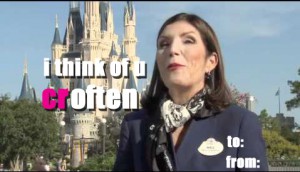 Remember in junior high when you put yourself out on the line and asked a girl to be your Valentine only to be turned down in an all too public fashion?  DCA knows the feeling too.  The poor park spent the length of two tours of high school being the laughing stock of the Disney community presumably since most Disney geeks haven’t been to Paris to bash on their second gate — myself included.

Similarly DCA 1.0 remains a divisive topic.  If you were a guest of the park in its early days — especially before park hopper tickets at the Disneyland Resort were a thing — chances are the park left you feeling underwhelmed (again, like… nevermind.)  However, if you were a local or someone who got to spend more time in the park, you likely found out that it’s a surprisingly nice place to just hang out; not to mention escape the crowds.

Part of me does miss going to Walgreens and picking out whatever pop culture inspired Valentine’s cards I saw fit to hand out that year.  Then going home and carefully deciding who to give each variant card to, which, in my case, usually meant guessing each of my friends’ favorite Ninja Turtle.  Coming home from school on the 14th with a bag full of Sweettarts and lollipops was second only to Halloween in terms of in-school celebrations.

Along those lines there are things I miss about Disney’s California Adventure.  The music loops of Sunshine Plaza and Paradise Pier, the fresh flour tortillas, the name-sake ice cream shop.  Heck, sometimes I even feel like riding Superstar Limo.

Ultimately V-Day and DCA 1.0 are things of the past for me, but it doesn’t hurt to stop and think about them sometimes.  So why look back in anger when you can remember the good times instead?