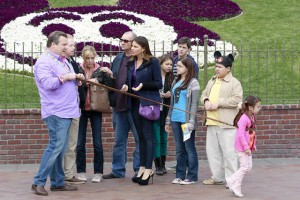 Eric Stonestreet shared a Disneyland anecdote about Andy. The two had an interesting day at the park in 2012. While riding Mr. Toad’s Wild Ride, Andy said “I just feel as though I’ve been farted out of an elephant.” Andy replied, “You know how that ride ends. It’s so hot and steamy. Toad gets hit by a train and then goes to hell!” Ariel Winter interjected: “He was drunk driving.” Jesse Tyler Ferguson explained, “She’s a Disneyphile. When we were shooting in Disneyland, Ariel was crying because we got to go to a place that few people ever do.” Eric Stonestreet explained, “We were in Walt’s coffin.”

The first questions were about last season’s finale, where Mitch and Cam got married. Steve Levitan said they weren’t sure where things would go politically. When the law was passed in California allowing same-sex couples to marry, they were very excited to tell that story. They lead up to it for a year because it was such a big deal. Ty Burell, who plays Phil Dunphy, cut him off at one point, jokingly saying “I oppose gay marriage.” Julie Bowen, who plays his wife Claire, joked that a new episode is about Mitch and Cam trying to get a divorce, but they find out gay divorce is illegal. Ty piped in again: “I oppose gay divorce.” 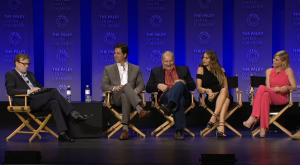 Staying on a similar theme, Adam asked Ed O’Neil about Jay’s evolution as a character, who had a hard time with the gay wedding on the show. He said “Jay is always being challenged with things that are uncomfortable to him.” An example he gave was a scene where he was reinforcing Cam and Mitch’s bed. Eric Stonestreet, who plays Cam, chimed in: “Oh, it needed reinforcement, alright.” Sofia Vergara has been referred to as “Latin Lucille Ball.” Adam asked if she was an inspiration to her. “She’s always been for me an icon. I watched her show in Columbia. I grew up watching her and of course its one of the things I remember from growing up having fun watching television.” She loves that the show lets he be so Latin and comfortable. “They had the balls to put someone like me on television.” After saying that, Julie Bowen couldn’t resist a jab. “Of course we all know how she looks and okay it’s fine.” Julie brought gave an anecdote about how she learned at Sofia’s birthday party that her father owned circus animals in Columbia. Sofia elaborated. The circus came to town and ran out of money. Her father had money and loved animals. “So he saved all the important ones like the tiger. Sixty years ago in Columbia nobody was going to stop him, so he had an elephant and a tiger.” Julie retorted:“You grew up in a zoo and you’re a supermodel. I’m not crazy.” Sofia went on to explain that her grandfather had a friend who also had a pet tiger. Once when he was drunk he climbed into the cage with the wrong tiger and almost died. 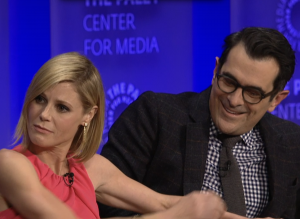 To Julie Bowen, Adam asked how Claire has remained funny against Phil on the show. She explained that she and Ty shorthand before each scene with fake puppets to try and get the dynamic of the scene right. “It’s our job to take care of the character’s on the set,” referring to how the writer’s sometimes leave it open to them to create the characters in the moment. Ty says they work hard to make sure every character is still doing new things. “I don’t really believe that characters grow on a sitcom. I don’t think you guys really want us to grow because if we did, I wouldn’t fall over things anymore. I’d learn how to communicate better with my wife.” But the writers create new things for them that keep it fresh. He referenced the Seinfeld episode called “Sitcom” which encapsulates his theory. He asked Jesse Tyler Ferguson what the balance is between Mitch’s failings and flaws and positive qualities? He said the writers are working on 12 characters, including baby Joe “who actually has big stuff coming up.” “You have to work with broad strokes. We do become sort of stereotypes of ourselves in the best possible ways… with that there are flaws and there are colors of things.” He loves getting to play the darker side of Mitch. “It’s our job to make these characters likable. We’re all really good looking, cute people.” He talks with the writers sometimes about things he doesn’t like. Eric Stonestreet added: “What I love about our show is that we hold that mirror up to people. I feel that smart people see into all of our flaws in life and that we don’t always do the right thing. That doesn’t make us bad people, it just makes us human.” 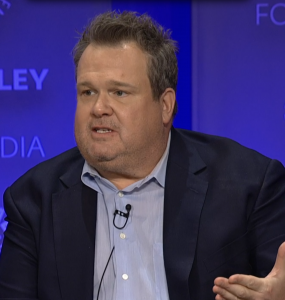 Eric Stonestreet was asked to explain Fizbo. “As a kid I wanted to be a clown… The truth is, Ringling Bros. came to Kansas City every year and my parents would take me on my birthday.” Cam’s history of growing up on a farm and wanting to be a clown is mirrored from Eric’s own childhood experience. “Thank god I had parents who were supportive. They let me be who I wanted to be and I know that was confusing for my dad when I wanted to experiment with my mom’s makeup and go to football practice. I hate the word weird. Weird people are creative people and expressive people. I’m glad my parents let me be weird which lead to me being an actor so I could be here today and be made fun of for being a clown.” Eric’s dad gave him the name Fizbo as a kid.

Sarah Hyland found herself in a true will they/wont they relationship on the show and was asked how she feels about it. “I’m rooting for a certain outcome, but they never really tell me what’s going on… Adam Devine is an amazing actor and a great person. I couldn’t be happier having that will they/won’t they with him. Last season’s finale really reminded me of a Rachel/Ross moment. It gives me something to do. I’m not texting on my phone and rolling my eyes anymore.” Nolan Gould was asked if he can really play the banjo and do flips on trampolines. “I really do play the banjo, but that was not me on the trampoline.” Ty Burrell chimed in: “That was me dressed up as Luke.” When asked who is more likely to succeed between Phil and Luke, Nolan put his foot in his mouth. “Phil’s really old and Luke’s so young.” Ty had a field day with his response, causing Nolan to blush. “I don’t even know how to continue now.” Ty responded: “Phil is like Yoda.”

Rico Rodrigues was asked where he thinks Manny will end up in life. “I kind of feel like much has his life is planned out, but not really. He knows he wants a girlfriend, but he has no luck. He’s not suave, but he thinks he is.” Sofia chimed in: “Rico, you’re talking like an old guy now!” Rico continued, “Manny and I are different in every way. Sofia quickly interrupted, “No.” Rico continued, “Many likes writing poetry and I like playing basketball.”

Producer Danny Zucker has had a public Twitter war with Donald Trump and was asked what it would take for them to make up. “I would say something nice over his rotting corpse. He’s an awful human. At one point in the middle of this nonsense he wrote me an email that was incomprehensible as always and I wrote back ‘I don’t know what this means, but I don’t like you.’ He wrote me back saying if you met me you’d like me. There’s no fact in the world that I’m more certain of.”

During the audience Q&A portion, few questions allowed the cast to really expand beyond the information shared in the moderated portion of the event. However, there was a very awkward moment. Both Sofia Vergara and Ariel Winter wore a similar black dress. This fan, referring to the fact that Ariel now has a curvy body and long black hair like Sofia, asked “Is there a mini-me episode where kids growing up will be noticed?” Ariel blushed, put her hands over her face and said “I’m so uncomfortable” as Sarah Hyland comforted her. Julie Bowen relieved the tension by joking: “I can say that backstage, Ariel said “I can’t effing believe I’m wearing the same dress as Sofia!” A fan got to ask a question through the Paley App. “What challenges did you face while filming “Connection Lost”?” Steve Levitan started the reply, “In this particular episode the basic idea came from I have two daughters in college and I FaceTime them a lot. We were talking and behind me is my wife looking over my soldier and I realized that this is an amazing portrait of somebody’s life if you took a screenshot right there. That was the beginning of it and it evolved from there… So much of our lives is revealed by what’s on our computer screens. The tricky part was trying to write a story that would sustain all of the people involved on that computer screen. This series hit the ground running. We’re very, very fortunate. The pilot was working and we got a lot of notoriety very early on. Now it becomes how do we sustain that? How do we keep the show interesting and surprise people and how do we tell stories different ways? Last year it was the Vegas episode, a classic French farce. It was a fun challenge for us. Yes we did shoot it on Apple devices. That was no big deal, for us the idea was just keeping it on the computer screen.”

Jesse Tyler Ferguson had to elaborate on that episode: “When we started shooting it we were given the phones and the iPads and were meant to be our own camera men. But we aren’t good camera men and ended up shooting the ceiling or backgrounds that don’t exist on our show.” Jesse went on to talk about the handsome camera men and how close they had to get. He was holding a guy’s wrist. Eric Stonestreet interjected, “I can’t think of anything more intimate than wrist holding.”