What Sorcery is This? 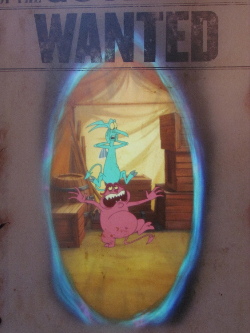 For the most part, my “office” is pretty bare, with only a handful of items on or around my desk. First, there’s my guitar that desperately needs to be restrung. Then there’s the Mickey art I purchased at D-Street a while back that refuses to stay put on my wall. And, finally, there’s a short stack of books in the corner, topped with a Ziplock bag containing my Sorcerers of the Magic Kingdom card collection.

When Sorcerers debuted, it was far from being on my radar. As much as I try to keep up on Disney news via Twitter, podcasts, and blogs, I had barely even heard of the interactive game that had been installed in Florida’s busiest park, seemingly as a distraction. However, once I got to experience the card game for myself, I found it to be surprisingly fun. I was also shocked that I could build a decent collection without spending an additional dime.

In conversations I’ve had with people about Sorcerers, we’ve all speculated that it would only be a matter of time before it headed west. Yet, some years later, it seems that’s just not in the plans. Meanwhile, Disneyland has experimented with role playing and scavenger hunt type games that seemed far more complicated than the already-tested SotMK. So what’s the hold up?

If Sorcerers or a game similar were to come to the Disneyland Resort, chances are it would head to Disney California Adventure. After all, there’s plenty more room over there than across the esplanade. While this might be good in terms of having space to play, part of what makes Sorcerers so great is that the story is actually pretty solid. Unfortunately, porting it over to DCA (which has enough story problems on its own) just wouldn’t fly. Still, I’m sure Imagineers could cook up something else that could even possibly help to tie the park’s theme together.

Honestly, I think the biggest challenge Sorcerers would have in Disneyland is what would also make it a hit: Annual Passholders. There is no doubt that APs would eat this game up with a spoon from the moment it was installed. You could argue that this could even improve day-guest experiences since you’d be drawing locals away from other attractions. However, I’d estimate that the cost of giving away the free cards might add up, even when considering the added food and merch costs AP Sorcerers addicts would spend.

In Magic Kingdom, Sorcerers are entitled to one free pack of game cards per day. These packs are bundled in sets of five, making it easy to amass a sizable arsenal in only a week’s stay. Perhaps Disneyland could amend this rule to be one pack per week, or even set different rules for different ticket types (i.e. keeping the one a day rule for visitors and once a week/month for APs). Of course, this would undoubtedly cause Annual Passholders to lose their minds, but what doesn’t these days?

I’m still holding out hoping that Sorcerers of the Magic Kingdom will find it’s way to Disneyland… even though I know that’s an extremely odd statement to be coming from a 29-year-old man. While I know there’s probably some behind-the-scenes reasoning that I’m not privy too, it seems like this would be a perfect addition to the resort’s Diamond Celebration. Rest assured that, if it ever is announced, I’ll be there with my deck of cards and my Cedric Diggory wand ready to do battle.