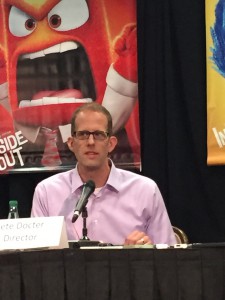 Disney Pixar’s latest animated blockbuster, Inside Out, goes inside the mind of an eleven-year old girl and introduces audiences to her emotions: Joy, Sadness, Anger, Fear and Disgust. Director Pete Docter (Monster’s, Inc., Up) came up with the idea when his daughter turned eleven. Suddenly his goofy, outgoing daughter was quiet and shy and he couldn’t understand why. He pitched the basic purpose of a story that takes place inside the mind of a young girl and the Pixar Brain Trust was instantly on board. Story development lasted for almost four years and Docter credits Josh Cooley and Ronnie del Carmen with many of the great plot elements in the film.

When it came to casting the characters, Docter and Rivera hold to the belief that a few of them cast themselves. Lewis Black, for example, was their first choice to play Anger. They thought they would have to woo him and even sent him a box with every Pixar film and a nice book to convince him this was worth his time. But for Black, taking the part was a no brainer. 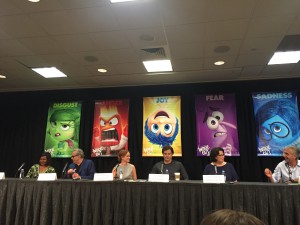 Both Rivera and Docter were big Saturday Night Live fans. One day they got a call that Bill Hader was in Pixar’s atrium hanging out because he’s an animation fan and the two couldn’t resist the opportunity to have coffee with him. While talking, the creative team asked if they could come to New York for a behind the scenes tour of SNL to help them with the Dream Productions sequence in the film. Hader helped write some of that scene and it quickly became clear that he was the best choice to play Fear. Phyllis Smith was offered the part of Sadness based on her role in the film Bad Teacher and Mindy Kaling was one of the names tossed around for Disgust based on her portrayal of Kelly Kapoor on The Office. Joy was the hardest and last character to be cast because the character had the ability to become annoying quickly. When Amy Poehler was brought onto the project, Docter sat with her and went over the script and she ended up contributing lines for all of the characters.

Character art director Albert Lozano decided early on that each emotion should be represented by shapes and colors. Joy is a star, Sadness a tear-drop, Anger is a brick, Fear a straight raw nerve, and Disgust represents a stalk of broccoli. The only character’s color that was hard to determine was purple for Fear, which was more by process of elimination than anything else. Joy originally had orange hair to keep all the characters monochromatic, but it didn’t read well and they changed it to blue. 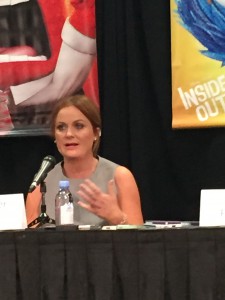 When I asked Pete Docter and Jonas Rivera if any similarities to the extinct Epcot attraction Cranium Command are coincidental or on purpose, Rivera explained that they are both huge fans of Disney Parks. Rivera hopes to get Inside Out into Epcot someday, so perhaps the Wonders of Life pavilion will make a return. Docter added that he worked at Disney Animation in 1989 and worked on Cranium Command. His head was even in the pre-show!

Amy Poehler is tremendously excited about being a part of Inside Out. “This film is gonna be the best Pixar movie ever made, and it’s gonna make the most money and it’s gonna win an Oscar.” But kidding aside, she put it very eloquently when she said, “Pixar doesn’t patronize their young audience and they don’t underestimate the intelligence of their audience every time so they keep raising the bar and also they assume that you and your big brain is gonna show up and your big heart. They assume you’re gonna take all those things with you when you go see their movies; and you’re so rewarded when you do.” She’s absolutely right.