Around the world, people are eagerly awaiting news about Shanghai Disneyland, set to open on June 16, 2016. Will Pirates live up to the rumors? Can TRON replace Space Mountain in Tomorrowland? What about that massive Castle? I just returned from an exclusive preview visit to Shanghai Disneyland during Trial Operations and this park will live up to expectations. The park will be opening with five impressive E-ticket attractions and four stage shows, many unique to this resort.

Attendance and expectations are anticipated to be high, and SH Disneyland is prepared. Wide thoroughfares and carefully trimmed gardens make exploration enjoyable. Ride queues are extensive and covered. Soaring Over the Horizon (boasting a new film that also debuts stateside June 17, 2016) easily swallowed up over 2 hours’ worth of queue from the rest of the park.

This newest Disney park features six themed lands around a central hub. Walking under the traditional train station, you are embraced by Mickey Avenue and immediately notice — this is not Main Street USA. The aroma of caramel popcorn draws you closer to the Castle…at once new, yet somehow familiar.

Crossing graceful bridges over waterways, you reach the Gardens of Imagination hub to greet Storyteller Walt and Mickey. Your difficult decision: where to explore next? Tomorrowland, Fantasyland, Treasure Cove, or Adventure Isle?

Here are the top five ‘must-see’ attractions that you won’t find anywhere else. Every Disney resort (except Hong Kong) has a variation of Disneyland’s original Pirates of the Caribbean attraction. We have grown up loving these carousing Audio-Animatronics singing ‘Yo-Ho, Yo-Ho’ with a bottle of rum.

In Shanghai, Pirates was completely re-imagined. You plunge – head-first – into a Jerry Bruckheimer film, joining Jack Sparrow at World’s End.

Your ship slinks forward in the darkness. You notice nods to tradition – the talking Jolly Roger Skull, a water-front restaurant (quick service Barbossa’s Bounty), the jail scene… but the similarities end there.

All the pirates in the jail scene – even the dog – have joined the skeleton realm. The Brethren Lords sit, as skeletons, at the Pirate Council, forever fighting over Pieces of Eight.

Your boat speeds up and turns precisely in time with Hans Zimmer’s commanding onboard audio soundtrack. Jack Sparrow wishes you good luck as you descend into Davy Jones’ locker. 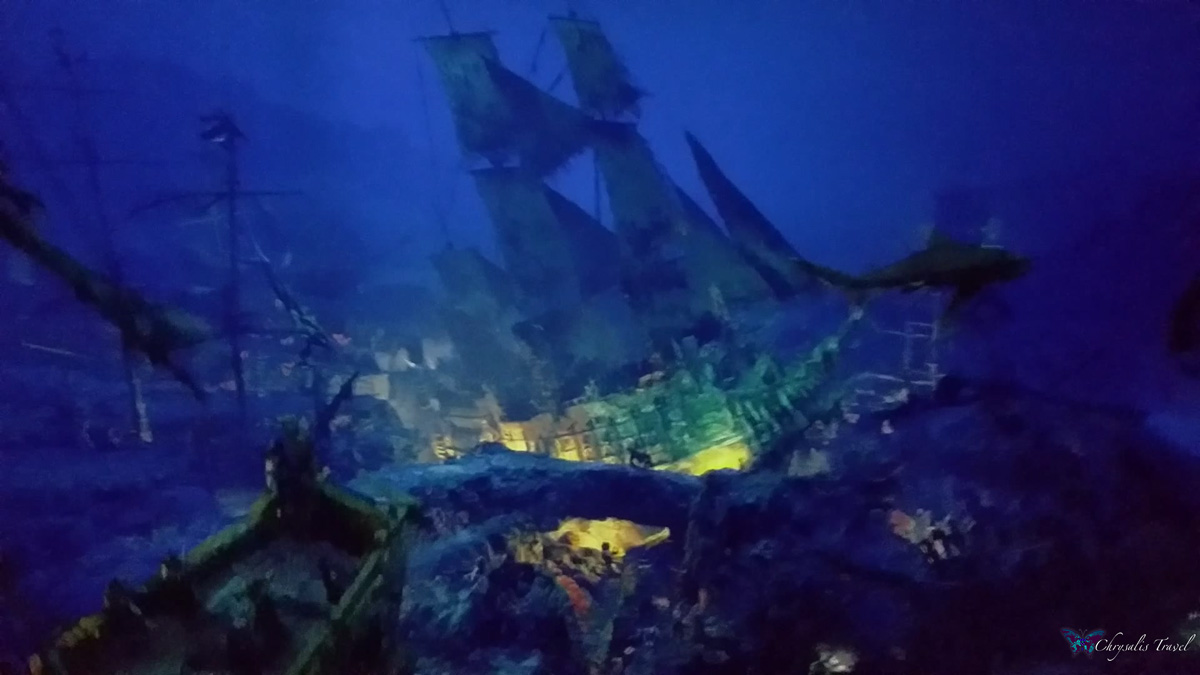 You are immersed in impossible beauty, as vast projection screens transport you into the depths of the ocean, following the path of a large shark. In a moment of peace, you drift downward through a wasteland of shipwrecks. Engrossed in the stunning visuals and moving score, it feels almost natural to be under water.

You journey through caverns, past mermaids and sunken treasure. You encounter an enraged Davy Jones animatronic. His wrath is stirred. In a scene of epic proportions, a graveyard of ships that dwarf your own are resurrected – and you with them.

Swept up from the depths, you gasp as you break the surface, bathed in a flaming sunset. As your tiny ship drifts between the massive Flying Dutchman and Black Pearl, you find Davy Jones and Jack Sparrow locked in a cannon battle to the death. The cinematic beauty of this newest Pirates ride and the perfection of its technical execution make this attraction a must-see at Shanghai Disneyland. The ride vehicle is so original, Imagineer Mark Sumner patented it for Disney. Pirates of the Caribbean: Battle for the Sunken Treasure rivals any other theme park attraction in the world in story, scope, and genius. TRON is the anchoring attraction in Shanghai Disneyland’s Tomorrowland. The clean lines, silver-on-white color theme, and futuristic fountain are reminiscent of the eponymous 2015 Brad Bird/George Clooney film. This is the first two-level Tomorrowland.

The TRON building is unmistakable. Streamlined and aerodynamic, the blue-lit sinusoidal silhouette is the new icon in place of Space Mountain.

Approaching, you hear screams. A lightcycle train hurtles overhead on the outdoor launch loop of the track. Yes! This is what you’ve been waiting for: one of Disney’s fastest coasters at over 60 miles per hour.

Step into the world of TRON, a “digitized darkness” with luminous blue glass. Step into the Grid. The queue introduces you to the competition ahead. Four teams will compete, one will triumph. You quickly learn that Team Orange is bad news. You are a new recruit to Team Blue.

The instructional audio is entirely in Mandarin, but there are many pictures with English subtitles. A small holding room features futuristic honey-combed grid graphics. The video suddenly dissolves to reveal the launch platform behind digital opaque glass. 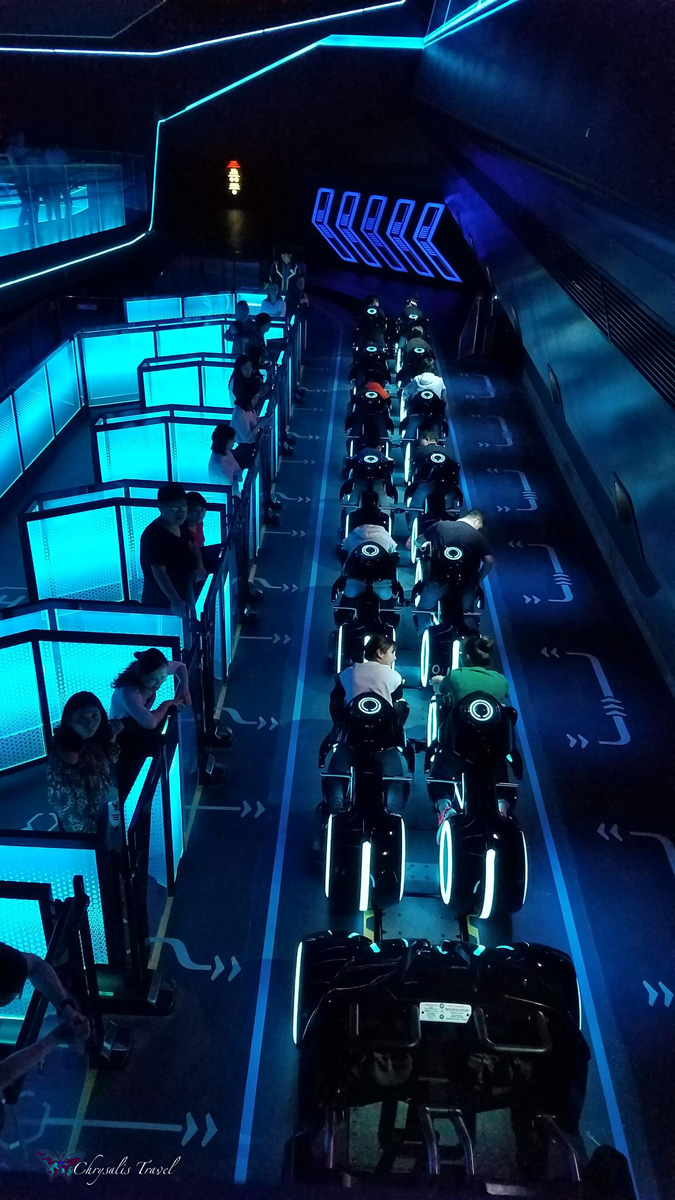 You settle onto your Lightcycle and realize: this is unlike any other coaster. (Only a handful of coasters have used remotely similar seating concepts, including Pony Express at Knott’s Berry Farm and Moto Coaster at Darien Lake, NY). You straddle your bike. There is no seatbelt. You find a comfortable position, and pull down on the handlebars, activating the Light Disc restraint behind you and securing leg restraints below you.

You’re jettisoned through darkness into the outside world and experience utter freedom. Careening on a silky smooth track at over 60MPH – it’s just you and your bike on an ultimate thrill ride.

You lean closer into your Lightcycle, entering the world of the Grid. Team Blue is matched against the Team Orange bad boys in a cataclysmic race for survival.

The indoor track catapults you through Gates on the Grid, with special effects technology similar to Hyperspace Mountain (Anaheim) and Rockin’ Roller Coaster (Paris). After an extraordinary wreck from Team Orange, you survive the Lightcycle run.

Does TRON measure up to Space Mountain? It most certainly does. The “weenie” of Shanghai Disneyland is undoubtedly the Enchanted Storybook Castle. It is a castle unlike any other.

Disney castles in Anaheim, Paris, and Hong Kong belong to Sleeping Beauty. Cinderella inspired the castles in Orlando and Tokyo. So who’s castle is this?

Shanghai Disneyland built this castle as a tribute to all the Princesses. It is as impressive as it is massive.

Graceful spires and parapets are built in varied architectural styles to honor different Disney Princesses. A weather vane on top points towards the original Disneyland in Anaheim.

As you circle the castle, you notice that no two sides are alike. You spot sculptures of small forest animals from Sleeping Beauty and gargoyle water spouts. An extensive two-level stage fronts the castle (guest entry is limited to the sides). 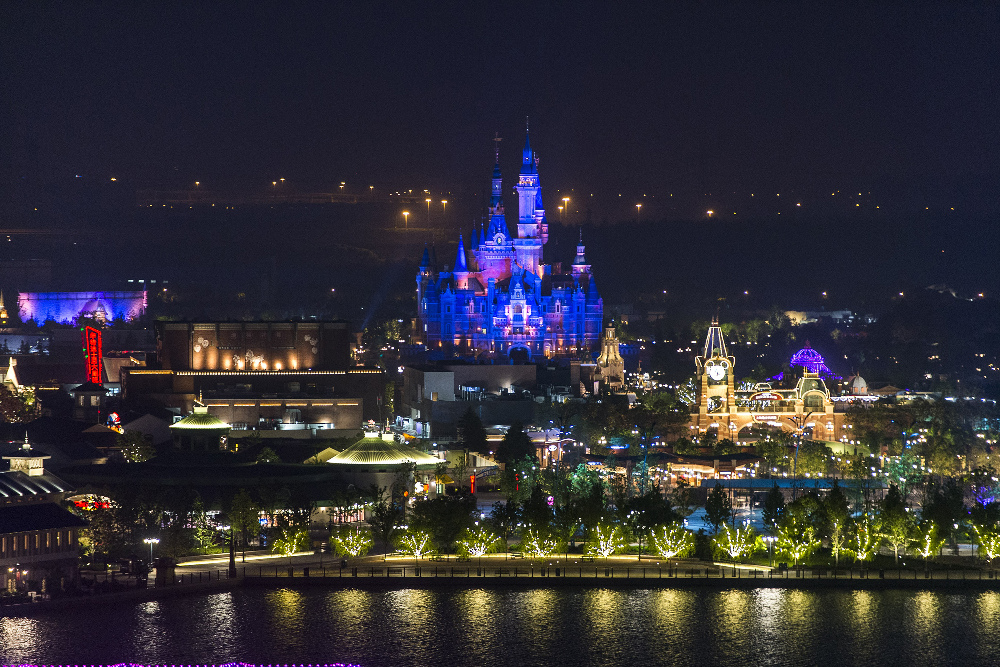 You step inside the central hall and gaze upwards… you’re in the sparkling ballroom scene from Beauty and the Beast. Mosaic murals of Merida, Rapunzel, Tiana, and Anna and Elsa grace the walls. Your kids tug at you – they want Princess autographs at Storybook Court.

A gentle spiral stairwell draws you into the “Once Upon a Time” Adventure – a Snow White walk-through inside the castle (ADA accessible by elevator). As you ascend, you pass walls lined with stained glass and sculpted plaques of Disney Princesses: Merida, Rapunzel, Pocahontas, Mulan.

It’s time for lunch, and you scored reservations at the only table-service restaurant in the Park. Royal Banquet Hall is a character dining experience, priced at 368 CNY adults, and 258 CNY children + 15% service charge (about $65 USD adults, $45 USD children).

First, a complimentary Princess photo session (similar to Akershus). Then, you’re whisked into one of five themed dining rooms perched atop the second level of the Castle. During your three-course meal, you take selfies with Mickey, Minnie, Donald, and Daisy dressed in royal attire exclusive to Shanghai Disneyland.

4) Voyage to the Crystal Grotto (Fantasyland) The Enchanted Storybook Castle is so substantial that there is a ride built into it. Voyage to the Crystal Grotto is a leisurely outdoor boat journey through beloved Disney stories (think Storybook Land on a Jungle Cruise scale).

Your voyage glides through charming scenes featuring The Sorcerer’s Apprentice, Aladdin and Genie, Ariel, Beauty and the Beast, Mulan, and Rapunzel. While their stories are familiar to us, some of their films may not have released in China. Many Disney characters are all new to the local Chinese audience. 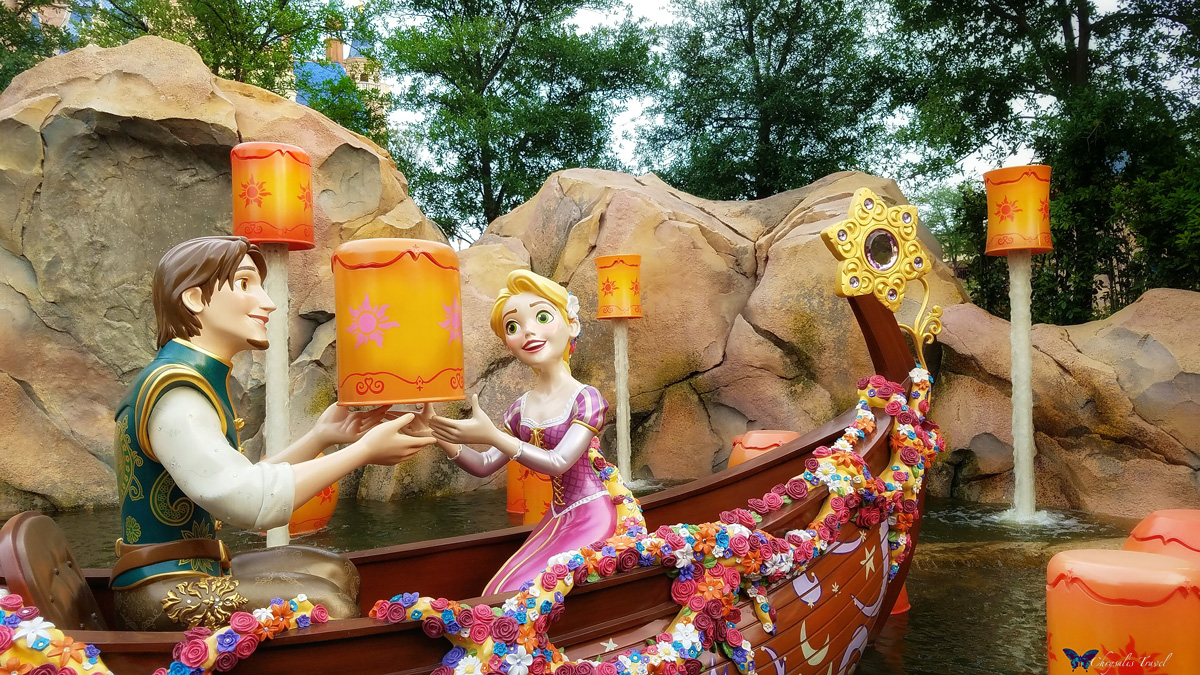 Your voyage culminates in a “legendary cave” inside the Castle. Fairytales come alive through a dazzling display of projections, lasers, and music reminiscent of effects in Tokyo’s updated Jungle Cruise. Calling all adventure seekers! Or if you have children at least 41.5 inches tall who need to burn off some energy. This is a fantastic attraction for you.

When we travel, we seek out unique experiences that we can’t do at home. This one makes the list. Located in Adventure Isle, the Challenge Trails are an amazing set of three ropes courses set against the backdrop of Roaring Mountain and its thunderous 120-foot waterfall. No other Disney park offers this level of exploration.

After securing your harness, you climb to survey the backside of a waterfall and the Temple of the Milky Way. Wander through Echo Cavern, or join the League of Adventurers exploring excavations in the House of the Ancients.

These were my Top 5 Must See Attractions Unique to Shanghai Disneyland. What about Roaring Rapids? Since they were running only test vehicles during my visit, I did not get to experience Roaring Rapids. Maybe next time…

If you had not considered going to Shanghai Disneyland, these previews should definitely have you planning a trip! For Disney fans who have seen the five existing Disney resorts – this sixth castle should be on your list.