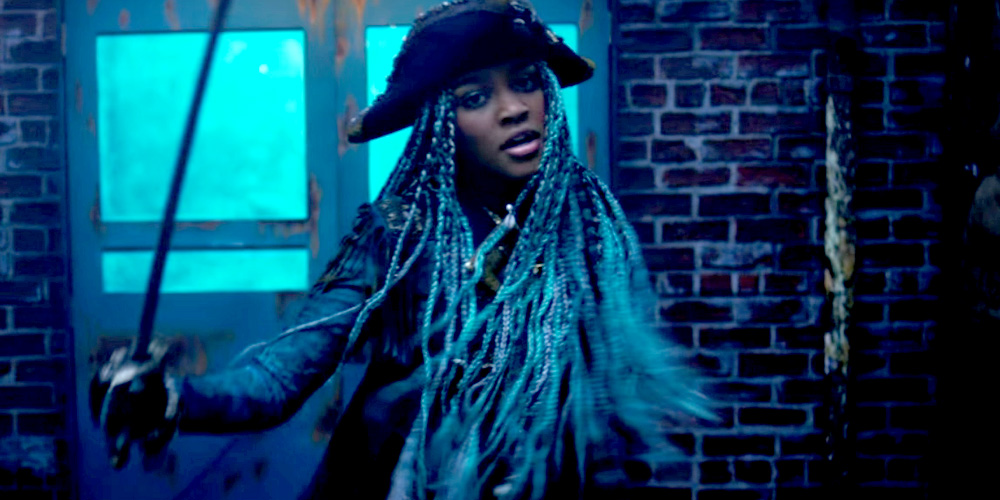 China Anne McClain will take over Radio Disney for the premiere of the single “What’s My Name” from the upcoming Disney Channel Original Movie Descendants 2, on Thursday, June 1 (5:00 p.m. EDT). The pop/R&B song will be available for download on iTunes at midnight on Friday, June 2, and the official lyric video will be available on DisneyMusicVEVO at 5:00 p.m. EDT.

In the movie, China Anne McClain joins the cast as Uma (daughter of Ursula from “The Little Mermaid”) who is Mal’s archenemy and leader of a motley crew of pirates including Captain Hook’s son Harry (Thomas Doherty) and Gaston’s son Gil (Dylan Playfair). “What’s My Name,” which includes vocals by Doherty and Playfair, establishes Uma as the self-proclaimed queen of the Isle of the Lost.

Steven Vincent, vice president, Music and Soundtracks, Disney Channels Worldwide, said, “China Anne has such natural talent and a very soulful voice. In this song, she brings it all and adds the perfect amount of attitude to the performance – she’s a great actress who knows how to put character into her singing.”

The song is produced by the songwriting/producing team Rock Mafia, Antonina Armato and Tim James, who wrote the lyrics with Tom Sturges and Adam Schmalholz.

“What’s My Name” is one of six original songs featured on the “Descendants 2” soundtrack which includes McClain’s renditions of “Kiss the Girl” and “Poor Unfortunate Souls” from Disney’s animated classic “The Little Mermaid.”

The “Descendants 2” soundtrack from Walt Disney Records is available now for pre-order (http://disneymusic.co/Descendants2) and wherever music is sold on Friday, July 21. Fans who pre-order the soundtrack can immediately download “What’s My Name” and “Ways to Be Wicked,” plus three upbeat pop songs from “Descendants: Wicked World.”

“Descendants” (2015) is the fifth most watched movie in cable TV history in Total Viewers (12.2 million) and has reached well over 100 million Total Viewers worldwide. Its videos on Disney’s YouTube channels have amassed over one billion views. The”Descendants” soundtrack topped the Billboard 200 album chart in its first week of release and also ranked No. 1 on Billboard’s Soundtrack, Children’s, Digital Album and Top Albums charts. The album was also No. 1 on the iTunes Album Overall and Soundtrack charts.