In December 1995, Star Wars fans were delighted to find a new entry into the world of Star Wars canon (though now expunged) via the anthology series Tales from Jabbas Palace. Highly successful, its stories fleshed out the backgrounds of many popular as well as lesser known characters that existed around the periphery of the Galaxy Far, Far Away. (Most popular? The resurrection of Boba Fett.)

In September 2017, Imperials and Rebels alike shouted with joy as Del Rey released the new anthology series Star Wars: From a Certain Point of View. Like Tales, it allowed characters from the margins of the Star Wars universe to tell their story, but in a stroke of marketing genius, it allowed 40 different writers a chance to unravel the events of Star Wars: Episode IV—A New Hope not from the traditional narrative that we’ve grown to love over the past four decades, but rather from the eye and ears of those that witnessed the Empire’s great defeat by the hand of a few dedicated star warriors. 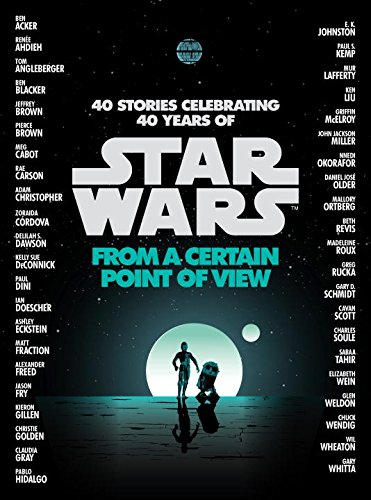 Another great offering marking the year of A New Hope’s 40th anniversary, the number of stories coincides with that celebration. Forty different authors have created forty different chapters, each of them well qualified to take on the task. Many have helmed Star Wars novels in the past and continue to contribute to the literary, theatrical and television offerings being produced.

Like the new stories being told, the purpose behind the book is also quite unique—not to generate additional income from the franchise, but to first give something new to fans of the long-loved legend, and also to give something back. Every author passed on compensation, instead donating it to First Book; an organization that promotes reading and literacy for children in need. It is one of the few times that by doing something we want (reading a new Star Wars story) can do something for good. Not a bad transaction, yes?

The task of reading forty new stories is at once exciting and disjointed. Like any anthology, the different writers and writing styles keep the reader on their toes with the promise of new styles and approaches with each new chapter. But unlike most anthologies, the over-joining story behind the collection (i.e., the events of A New Hope) suggests a connection or flow that required some getting used to before I could really settle in and enjoy the book. The chapters unfold in the same chronological order as the film does. That part was easy to digest. We know the film so well, that the reader will instantly recognize the setting and context of the original chapters. The writers still do a good job of setting the scene and introducing the characters, but the continual need to provide some background for the lesser known characters can be a bit tiring. I needed to do a quick Wiki search for some of the alien species described so as to properly identify in my mind’s eye the characters being described. Most would just allow their imagination to do this for them, but with Star Wars, even the most insignificant of characters are instantly recognized when seen on screen, so it feels like I had to picture the right mask or costume or I’d be missing something.

That isn’t to say that the anthology only focuses on marginal characters. For every Muftak or Bith mentioned (as in the Kloo Horn Cantina Caper by Kelly Sue DeConnick & Matt Faction—my choice for favorite story) there are ample inclusions of the main characters in the series. We get stories with Obi-Wan, Qui-Gon, Yoda, Vader, Leia, Luke, Tarkin, and even Biggs. Sometimes these popular characters appear on the margins of the stories, but other times they are the focus of the chapter.

What was very pleasing to me was the fact that just like a traditional novel, the quality and intensity of the story built up as the book continued to unfold. I don’t mean to say that the stories at the beginning of the book were poorly done, but the ones that appear towards the end are top notch. I didn’t expect this, and it was a great surprise.

I don’t wish to ruin anything for you by going into depth about the specifics of each chapter; they are so short that I feel that analysis or break-down might ruin the joy of discovering each one. And that is the really the pleasure and indulgence of reading an anthology. Each story is a world unto itself, but this time around, it serves the purpose of introducing the events to readers well familiar with the world’s greatest sci-fi space opera, but in a way that allows us to experience it possibly like we did 40 years ago—with fresh eyes and new appreciation for the depth of the narrative.

Speaking of appreciation, I will ruin one story, the last one, Whills by Tom Angleberger. In it, two of the Whills (the ethereal watchers that…oh, just Wiki what a Whills is) are debating with one another about how to best journal the events of New Hope. As one begins to write what we know as the screen crawl from Episode 4, the other takes on a voice that is undoubtedly meant to spoof the people that always tried to overthink the series. Critical of word choice, questioning of what is included, and shocked at what is being left out, it reminds us that being overly analytical about Star Wars misses the point of the whole thing. It is about myth, it is about virtue, and most of all, it is about sitting back and enjoying one heck of a ride.

Find that joy yourself as Star Wars: Episode IV—A New Hope is presented to you in a delightfully original fashion. Star Wars: From a Certain Point of View is available now online and in bookstores worldwide.