Grab your tasting passport and get ready to experience the cultures of the peoples who celebrate Christmas, Diwali, Hanukkah, Kwanzaa and Navidad as the Festival of Holidays returns to Disney’s California Adventure.

Along the park’s parade corridor, you’ll find various locations offering savory and dessert items connected to these cultures — foods you could find at their family gatherings this time of year. Along with these food items, there are select alcoholic and non-alcoholic beverages that pair well with them. Food items range from $4 to $8 while the alcohol began at $9.50.

Annual Passholders are offered the Sip and Savor pass. It’s $45 and allows the holder to redeem its coupons for eight food or non-alcoholic beverages from most of the kiosks. As you redeem each coupon not only will you receive the food or beverage but you also receive a special AP button (while supplies last). The pass may be used on a single visit or throughout the length of the Festival.

While eating a tasty Pineapple Kesari with golden raisins I enjoyed hearing a variety of languages recognizing a couple of Hebrew melodies along with Cascabel, a Spanish language version of “Jingle Bells.” 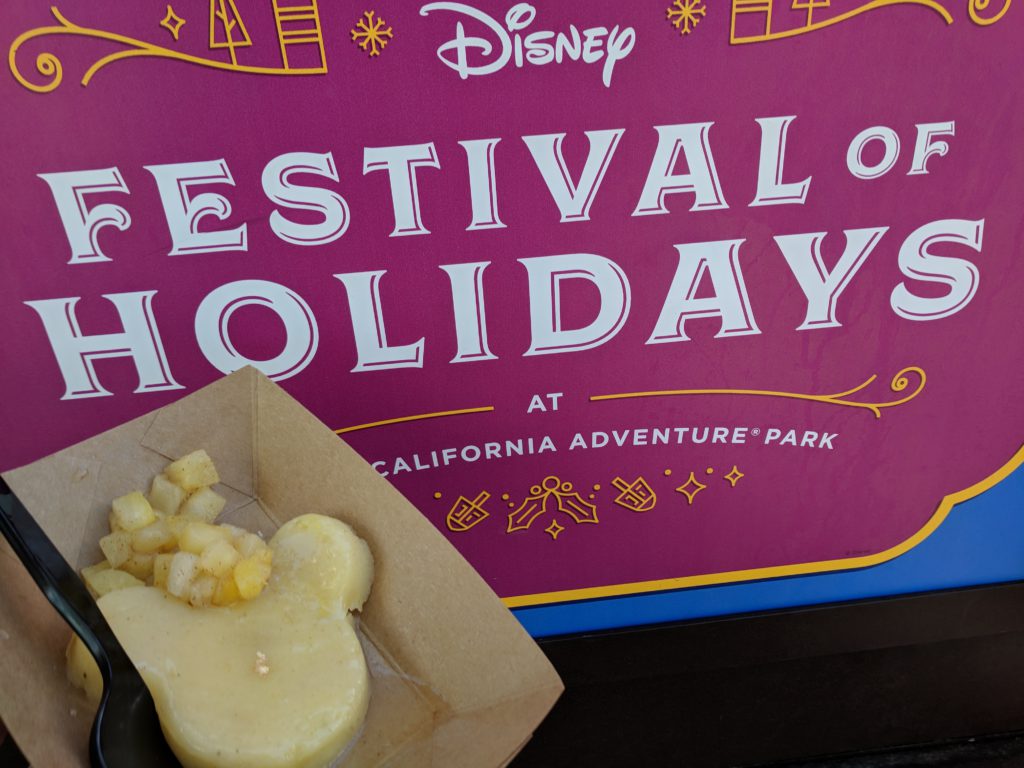 The kiosks and tasting passport highlight the culture represented by each dish. The kesari I tried celebrates the culture of India, where the Hindu Festival of Lights Diwali is celebrated. You can also find the Blue 13 Dance Company performing traditional Indian folk dances throughout the day at Paradise Pier.

Also at Paradise Pier, you can find the high energy modern klezmer band Mostly Kosher introducing passers-by to the history and humor through heartbreak found in Jewish jazz melodies. During the performance I caught, we were treated to Hanukkah melodies along with a Sephardic folk song about Abraham’s birth (sung in the Judeo-Spanish language often referred to as Ladino) Kuando el rey Nimrod. 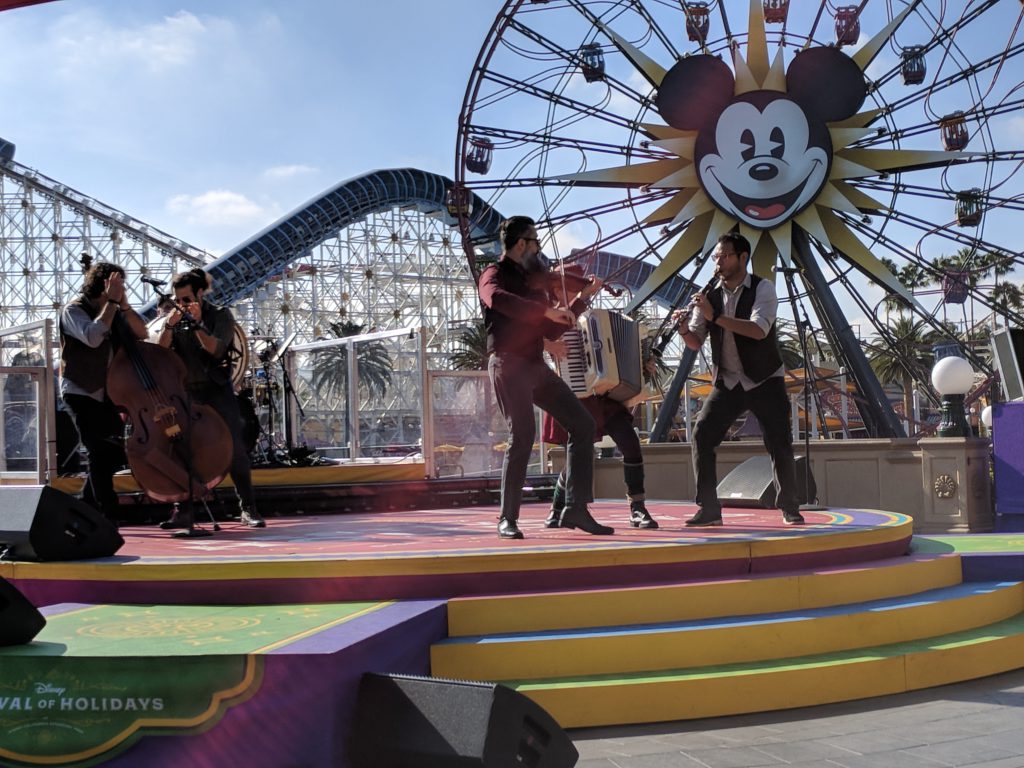 The delightful Holiday Toy Drummers, a percussion group that appears to just have arrived from Toyland perform often throughout the day. Over at the Pacific Wharf you’ll find The Sound, an acapella group offering songs of Kwanzaa and Christmas or perhaps you’ll find the Mariachi Divas, an all-female band and as the sun sets Phat Cat Swinger, the West Coast’s “Little Big-Band” continues the holiday celebration back at Paradise Pier park.

Near Goofy’s Sky School at various times throughout the day, the street comes alive with a colorful street party hosted by the Three Caballeros celebrating Navidad in the Festival’s final days the celebration will honor The Three Kings Festival.  And the dining locations in this area offer a variety of foods you could find when the family gathers for Navidad.

During Disney’s Festival of Holidays, it’s nice to remember and enjoy that while these festivals are born of differing religions and celebrated by a variety of cultures each celebration offers a time to gather and includes illuminations whether candles or lights among their traditions. The event is now in full swing at Disney California Adventure and lasts through January 7th.