TV Review: ABC’s “Splitting Up Together” Last summer when ABC announced their new shows in development and before the schedule had been finalized, I was most excited about a sitcom called Splitting Up Together. Not only did it star Jenna Fischer from The Office, but it was also by Ellen Degeneres’ A Very Good Production, Inc. I love most things by “Stupid Ellen” and was pumped for this… and then it got bumped to Spring. When a fall sitcom becomes a mid-season replacement before the season starts, it usually means bad news and indeed, this sitcom is all sit and no com.

Lena (Fischer) and Martin (Oliver Hudson) have decided to call it quits after over a decade of marriage. But for the sake of their three kids, they are staying in the same house with each parent assigned a week of house duty while the other enjoys life in the garage with no parental responsibilities. Within the first two episodes of the series, the recurring theme is that neither is as strong a parent alone as they were as a team. There are hints that the love isn’t completely gone as they begin to recognize their own responsibility for not making it work, but also deny the option of giving it another go. 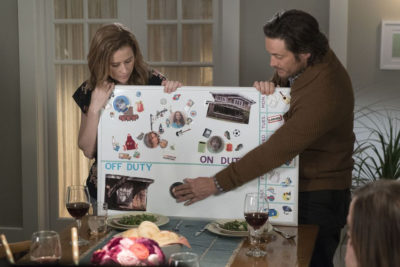 There isn’t a single laughable moment in the entirety of the pilot. Just to make sure I wasn’t missing something, I gave it another chance and watched the second episode, “Devil May Care.” While the divorced couple dynamic still doesn’t deliver a single laugh, I did find that I was enjoying the characters a little more. Not enough to devote time to watching more episodes, but enough that I didn’t altogether hate it. And there was one genuinely funny moment involving Lena’s friend (Lindsay Price) and a chip reader.

I was excited by the premise, the casting, and the creative team. But something has gone wrong in the process of bringing Splitting Up Together to the screen and I was very disappointed after being so enthusiastic about it. While it’s labeled as a sitcom, more often than not it’s just sad, a half-hour dramedy. Moments that could’ve been played for laughs (Lena taking her pubescent son to the doctor for what turns out to be blue balls) fall flat when the situation is awkwardly used to try and land her a date with the doctor. It also has a lot to say about how the dating pool for middle aged women is less exciting then it is for men without exploring the potential humor of the situation. 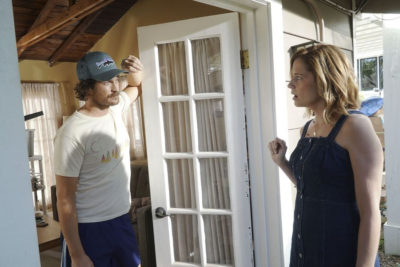 Splitting Up Together joins ABC’s Tuesday night lineup, bumping Modern Family back to Wednesdays. It’s in the 9:30 timeslot, the last comedy of the night, with Black-ish as its lead in. While that wonderful sitcom might benefit from the return of Roseanne in the 8:00 hour, I doubt many will stick around for Splitting Up Together, which has relied on the same unfunny jokes in every ad for the past month. The writing is on the wall and it won’t be long before ABC divorces itself from this travesty. It’s a shame, it had a lot of potential.

Splitting Up Together premieres Tuesday, March 27th, and will likely be canceled shortly after.