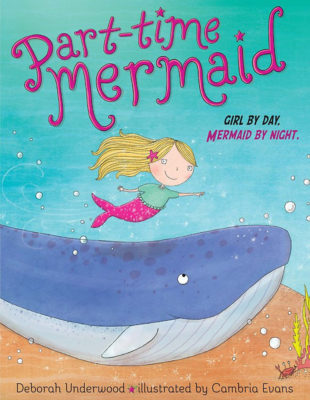 I spent a significant amount of time as a child pretending to be a mermaid… merboy… merperson… whatever. I obsessively watched both The Little Mermaid and Splash, the latter made me believe I could turn my legs into a fin by adding salt to my bath (it didn’t work). I would give my mom panic attacks by binding my ankles together with a diving ring, putting flippers on around my feet, and flipping my fins in the deep end of the pool (and now someone is getting rich off my 5-year-old self’s idea). Reading Part-Time Mermaid took me right back to being a kid and wishing with all my might that I could trade my legs for fins at will and be that level of extra.

“Girl by day, mermaid by night,” says the cover of this charming picture book. When Part-Time Mermaid goes to sleep as a human girl, she is magically transformed into a mermaid at midnight every night. She and her merboy brother go on oceanic adventures, saving cruise ships from sinking, saying no to offers from sea witches, riding sea horses, and getting strawberry ice cream cones. When they wake up, they’re human again, but with damp hair that smells like salt water.

Deborah Underwood’s charming story is actually a follow up to a book I was unfamiliar with called Part-Time Princess. My guess is that the predecessor was charming, but I can’t imagine anything better than Part-Time Mermaid. The illustrations by Cambria Evans are delightful, with Part-Time Mermaid’s fin reflected as a glimmering pink color (merboy’s fin is a more traditional scaly green). The book’s dustcover adds glittery accents to the title, her fin, and the bubbles that trail behind her.

I often recommend Disney Hyperion’s children’s books for the bedtime rotation, but Part-Time Mermaid would be equally delightful as a bath time story. Or better yet, you and your kids can put on your mermaid fin blankets (they come in adult sizes!!!) and cozy up with this charming story. At its core, it’s about a child’s right to dream big with no restrictions. A very Disney sentiment indeed.