With Mickey Mouse’s 90th birthday celebrations scheduled to swing into high gear over the next few months, there are a number of books scheduled for release to mark the occasion. One book already on bookstore shelves and available online seeks to set the record straight about Mickey’s humble beginnings and his two fathers. Don’t adjust those reading glasses, you read it correctly: Mickey’s two dads. Not like this story hasn’t been written or documented before but author Jeff Ryan seeks to give credit where credit is due. “Ub Iwerks was the person who invented Mickey Mouse. He drew the things that led up to Mickey,” Ryan argues in his new book A Mouse Divided. 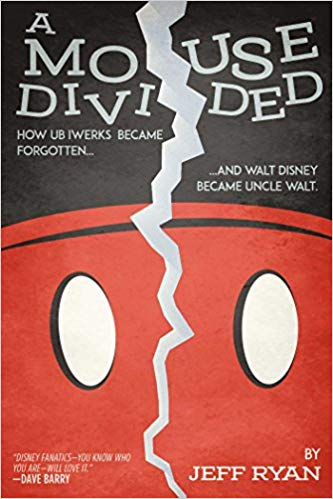 “The truth and the legend can stand together,” according to Ryan. “The truth, in this case, is that his (Walt’s) best friend, his business partner and lead animator Ub Iwerks was the person who invented Mickey Mouse,” the author documents in his new book. Ryan says Iwerks drew everything that led up to Mickey and “then he drew every frame of Mickey’s first appearance.”

According to Ryan’s book, Universal had actually attempted to lure Iwerks to bring his sketchpad to New York and work for them. Turning down the offer the trusted friend warned Disney of what was on the horizon but Disney turned a deaf ear to the animator. It wasn’t until Disney traveled to the Big Apple to meet with Universal executives about what Disney thought was going to be a new deal for Oswald cartoons that Ryan says “the anvil was dropped on his (Disney’s) head and Walt couldn’t believe it.”

When Universal snatched the rights of Oswald the Lucky Rabbit from the hands of Walt Disney, the fledgling studio needed something and something fast. Walt ordered Iwerks to come up with another character. “It didn’t matter what animal they picked. They had tried a horse, a cat. I think they tried another rabbit. They tried a frog and eventually they settled on a mouse because no one had done that before,” Ryan notes.

As Iwerks put pencil to paper he secluded himself in his office and draped a black curtain around the windows so no one could see what he was working on. Ryan says the departing animators headed for Universal thought Iwerks was cutting himself off from them because he did not want to be bothered with them while in reality, Iwerks was fast at work on his new Disney character.

Ryan’s quest for new information on the Disney Iwerks friendship, partnership, separation, and reconciliation led him to read as much about the two men. Needless to say, there was a lot written about Walt but little as it pertained to Ub. However, in his quest to find information, Ryan stumbled upon a footnote in a book he was reading that led him to Richard Hubler. Known as an American screenwriter and author of biographies, Hubler’s best-known work was the 1965 book he ghostwrote for Ronald Reagan. Hubler wrote the first authorized Disney biography in 1967, the year after Walt’s death. After the Disney family read the finished book turned mouse-mitts down on the project and the book never saw the light of day.

The footnote led Ryan to the Boston Library where the only known manuscript of the biography resides. Upon Hubler’s death, the book was included in the author’s papers that were donated to the library. Ryan spent days plowing through the notes and the never-released manuscript. He also discovered dozens of interviews for the book including an interview with Iwerks talking about his 40-year career at Disney. 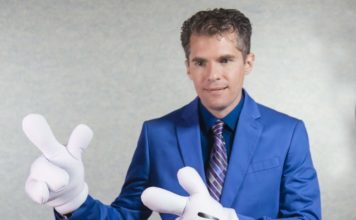 Ryan’s work on A Mouse Divided came after he published a book on Nintendo. In Super Mario: How Nintendo Conquered America, the video-game enthusiast likened the iconic Mario to Mickey Mouse. How he explored Mario’s relationship to Nintendo and pop culture he began to think of Mario as Nintendo’s Mickey Mouse.