Hasbro continues to be the highlight of Toy Fair, thanks in no small part to their commitment to expanding the way we play, collect, and interact with the Star Wars universe. This year, they didn’t have many big announcements to make, save for the re-launch of Hasbro Pulse and the surprise availability of items for pre-order or “See Now Buy Now” instantly available products. While there was nothing quite on the same level as last year’s HasLabs crowdfunded Jaba’s Sail Barge (which will ship to those who ordered on March 4th), they did surprise fans with a few new items that are designed to live alongside (or inside) that set. 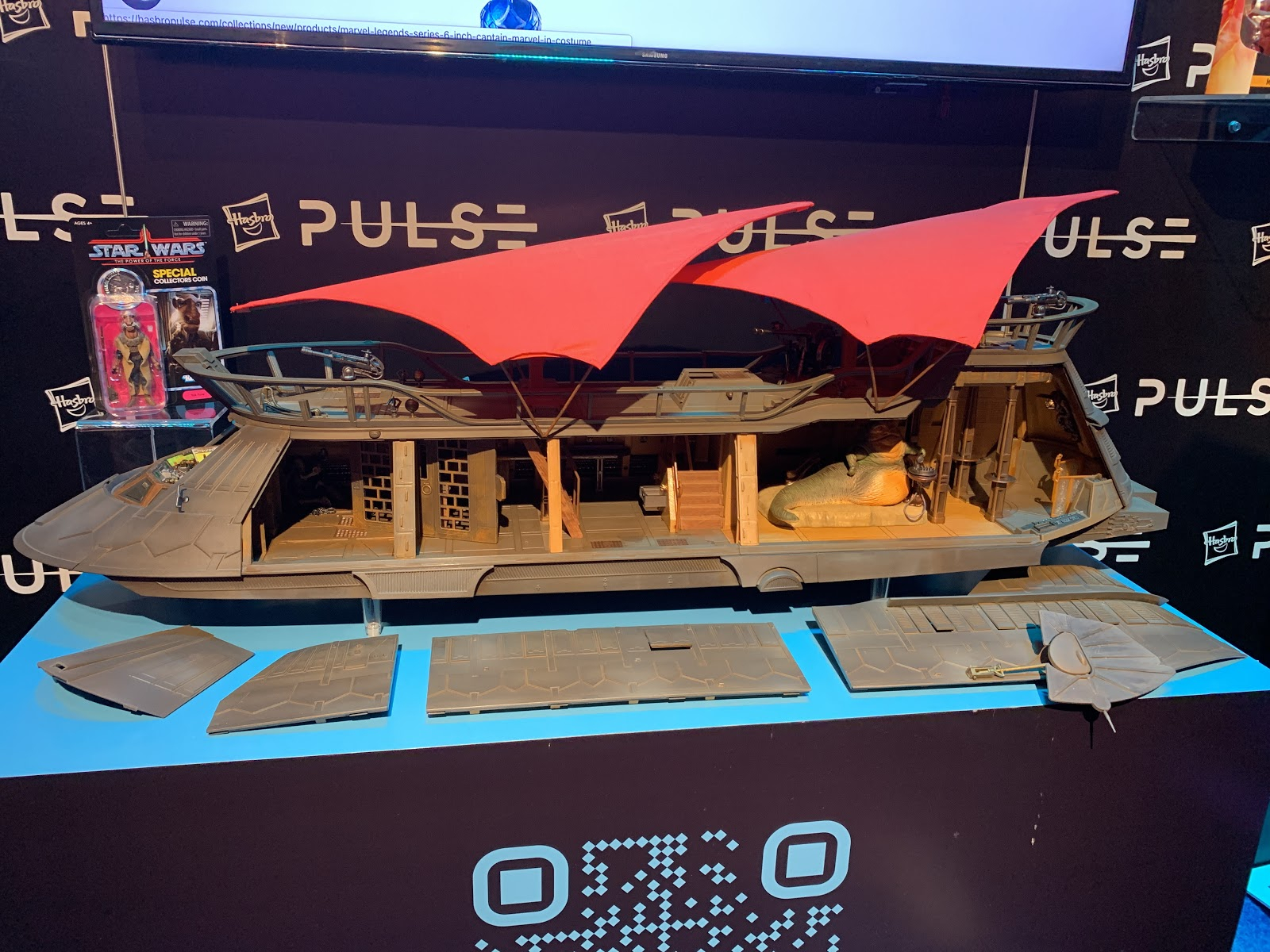 A redesigned Tatooine Skiff will debut this fall and is the right scale for the Sail Barge. A 3-pack of figures will be sold separately to help protect it. Staying on theme, Wal Mart will have an exclusive Jabba’s Palace Adventure Play Set, which includes figures for Han Solo, Han Solo in Carbonite, and a guard. The carbonite piece attaches magnetically and the play set has movable arches for easy storage when not on display. WalMart will also have an exclusive Lando Calrissian action figure in Skiff Guard gear.

All of these Return of the Jedi themed collectables are part of the Vintage Collection branding, which will soon expand with even more figures. Several of them are from this same Tattooine sequence and would also make a great addition to the Sail Barge for any fans who are expecting a delivery soon. Princess Leia can be acquired in her Boushh disguise, perfect for the Jabba’s Palace set. There’s also Saelt Marae, a Scariff Stormtrooper, and Klaatu. Many other Vintage Collection figures were on display, including an Elite Praetorian Guard, Imperial Stormtrooper, Elite Clone Trooper, Solo era Lando Calrissian, and a Target exclusive Stormtrooper Han Solo.

Fans who lived through the original era of Kenner action figures will likely be nostalgic for this next series, as will viewers of Netflix’s The Toys That Made Us. The Retro Collection is a line of six action figures inspired by the original look of the Kenner action figures. Fans can pick up 3.75 inch figures of Luke Skywalker, Han Solo, Princess Leia, Chewbacca, Darth Vader, and a Stormtrooper. These individual figures will all be exclusive to Target for $9.99 each and will begin appearing in stores this spring. There is one figure in this wave that was never produced in the original Kenner style, which is Grand Moff Tarkin. He makes his debut paired with a board game reproduction called “Escape From Death Star.” This game and figure will be available at all retailers in May for $19.99.

The latest advancements in action figure technology will be applied to the Black Series with the first HyperReal figure, Darth Vader. Using a metal armature surrounded by a fleshy exterior, the figure looks as life-like as possible, with no joints and a full range of articulation and poseability. This figures is 8-inches, which allows for greater detail with the paint job. HyperReal Darth Vader debuts this fall and is available for preorder for $79.99.

All of the Black Series 6-inch figures being released this Spring were announced last fall and Hasbro is unable to share any information about figures from Episode IX. However, all of the Spring releases were on display and include Han Solo Mimban, Padme Amidala, Admiral Haldo, Dryden Vos, Mace Windu, and a Battle Droid. Target will have an exclusive Death Star Escape Luke Skywalker, while Game Stop is now selling their exclusive Imperial Jump Trooper. Another wave will release next fall and Hasbro announced the figures at New York Comic Con. A summer wave will add Ezra, Chopper, and Phantom Menace Obi-Wan Kenobi. A Fall wave will include Darth Maul.

Collectors heading to Star Wars Celebration this May will have the chance to pick up Obi-Wan Kenobi and Darth Maul early, on exclusive throwback packaging to celebrate the 20th anniversary of The Phantom Menace. They also teased that they would have some news to share for fans joining them in Chicago. 2020 will be the 40th Anniversary of The Empire Strikes Back and fans can expect to see some of their favorite moments from the film celebrated through next year’s Black Series releases. Fans will even have the chance to vote on a figure that will be part of this celebratory release.

Star Wars Lightsaber Academy is shaping up to be one of the hottest toys this Fall. The “Smart Hilt” uses bluetooth to connect to an app for training modes, which allows players to level up and learn from both sides of the force. The blade detaches and you can even change the color on the hilt. A compartment also opens up to review the Kyber Crystal, which can be pressed to switch from the light to dark side of the force, if the player chooses that path. 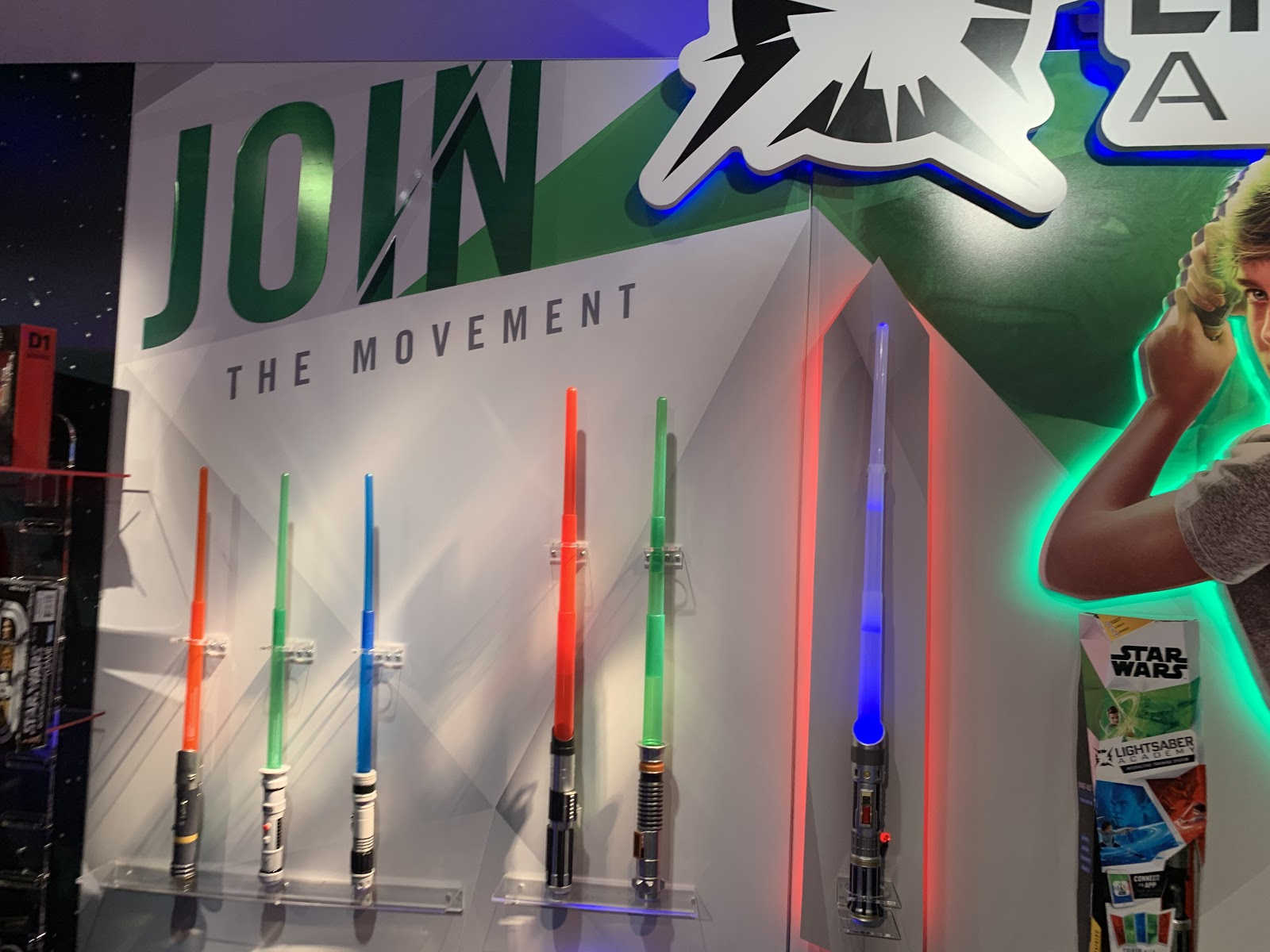 Two styles will be available at launch and the retail price is $49.99. Kids (and adults) will learn lightsaber moves as seen in the saga directly from Jedi and Sith masters. Best of all, you can turn off the academy features and play with it just like a traditional lightsaber.

I recently reviewed waves 1 and 2 of Star Wars: Galaxy of Adventures, a kid-focused line of action figures, comics, and an animated web series. Wave 3 will be hitting stores soon and includes Rey, Boba Fett, Obi-Wan Kenobi, Darth Maul, and General Grievous. Just like the previous waves, they each include a mini-comic that highlights a key moment in their character journey.

The final piece of Star Wars news was hidden in Hasbro’s game section. Due later this fall, Chewie Bop It! will add Wookie grunts and growls to the classic Bop It! game. With commands from Han Solo, kids will interact with Chewie’s head, arms, and legs to play the game. Some wise advice: let the Wookie win. Hasbro previously released a BB-8 Bop It!, with commands from C-3PO. 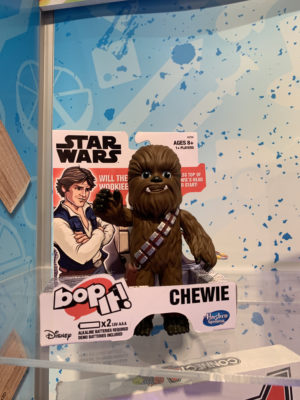 Of all the Hasbro products revealed, I’m most excited for the Retro Collection and the HyperReal Darth Vader. But the biggest surprise was the rebranded Hasbro Pulse, with many of the Toy Fair announcements instantly available for preorder or purchase. May the force be with you.