Book Review: “One Day at Disney”

Tags: Disney Books, Disney Plus, One Day at Disney, Review 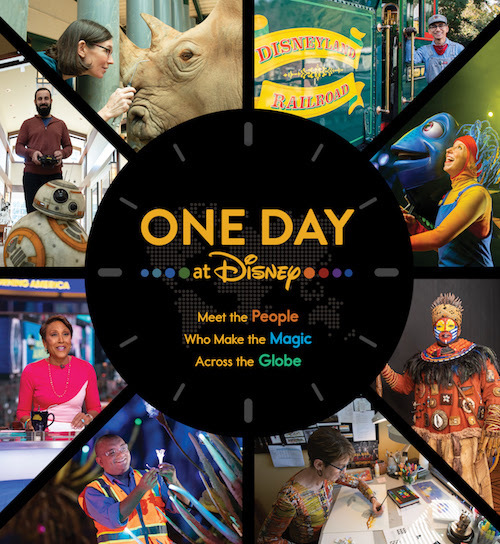 One Day at Disney is perhaps the biggest company-wide collaboration the Walt Disney Company has undertaken in the modern era, announced at the D23 Expo as the “Secret Company Project.” On February 21st, 2019, camera crews dispersed all over the world to showcase 76 Disney Cast Members on the job in various roles. The result is a beautiful coffee table book (the subject of this review) by Bruce Steele and a Disney+ documentary film and short series, all of which debut on December 3rd.

The Cast Member profiles each feature some background information on the employee’s journey to their current role as well as a few fun facts, like their hometown and favorite Disney movie or attraction. To accompany the cast profile, there are a multitude of photos of the Cast Members on the job, which gives a rare glimpse into backstage areas of Disney Parks or top secret laboratories at Walt Disney Imagineering as just a few examples of the behind-the-scenes magic that is eternally out of view from fans and park goers.

The unique timeline of the profiles encompass a few milestones for the company. Star Wars: Galaxy’s Edge is still under construction on both coasts, Disneyland’s Sleeping Beauty Castle is undergoing refurbishment, Disney+ series like The Mandalorian and High School Musical: The Musical: The Series are in active production, Captain Marvel is about to debut in theaters, and Disney Cruise Line is working to bring three new ships to the fleet. Exciting times, indeed!

Eight chapters are divided into sections of time, with each representing three hours of the day starting with 12:00 am PT. Despite beginning with California time, the first Cast Member featured is at Walt Disney World in Orlando while the final profile takes us back to Disneyland in Anaheim. In between, you’ll meet Cast Members in Hollywood, Burbank, Glendale, Los Angeles, Playa Vista, Newhall, San Francisco, Emeryville, Salt Lake City, Minneapolis, New York, Castaway Cay, Costa Rica, Madrid, Paris, O’Ahu, Tokyo, Hong Kong, and Shanghai. It’s a salute to all locations around the world with a Disney presence, but mostly California.

There’s a lot to unpack within One Day at Disney that makes for a fun reading experience and there’s no denying that the book is beautiful and well written. But when you get to the end and think about the parts of Disney that you know as a fan and Guest, you’ll be surprised by how much is left untouched. For example, there isn’t a single featured Cast Member from a Disney Store location, or any Cast Members that make magic for Guests spending the night at a Disney Resort, nor is there a Walt Disney Archives member to be found. It would be impossible to undertake a project of this size and not leave a large number of roles within the company unfeatured, but my point is that because it overemphasizes the “Sexy” jobs, you miss out on the bigger picture of all of the hard working departments that make the magic for Disney fans all around the world every day.

My favorite Cast Member highlights fall into that category. These include Stephanie Carroll, a Walt Disney World Ranch Hand who was driving Cinderella’s Carriage early that morning for a Disney Fairytale Weddings photo shoot; Kai Nakiki, a Tokyo Disneyland Stage Manager who helps bring the nighttime parade Dreamlights to life from behind the scenes; Fabiola Kersul De Salles, a PhotoPass Photographer at the Magic Kingdom who traded a career as a lawyer for capturing magic moments and making memories; Mark Gonzales, a Disneyland Steam Locomotive Engineer who lives Walt Disney’s train dreams every day; Sidney Bain, Tram Coordinator/Trainer/Pest Control on Castaway Cay who has been with the island since Disney leased it; and Lois Hammersley, Magic Kingdom Parade Audience Control, whose story of being unable to stay retired really stayed with me.

Disney fans are sure to learn about at least a few roles they never knew existed while reading One Day at Disney. Storytelling has always been at the heart of the greatest products from the Walt Disney Company and in this book, you’ll get 76 stories about dreamers who became doers at Disney. While I can’t speak for the Disney+ series, I foresee this book as being a wonderful companion piece and one that can be revisited each week as another short reconnects you with the Cast Members within these pages. If you love going behind the scenes at Disney, you’ll love spending One Day at Disney.