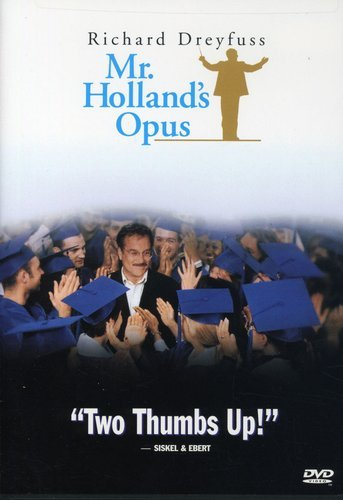 Everyone loves a feel-good movie. Mr. Holland’s Opus is that feel-good movie that stays with the audience and continues to be relevant even twenty-four years after its release.

Starting in 1965, we meet a young musician named Glenn Holland who has reluctantly taken a teaching job at John F. Kennedy High School. He figures it will allow him some downtime to work on his music. Holland has no idea what he is getting himself into.

Meeting Principal Jacobs, played by Olympia Dukakis, Holland is escorted into his room, where he meets his students, and learns quickly that he doesn’t like teaching. Holland finds the kids boring. He makes friends with the football coach Bill Meister played by Jay Thomas, gets forced into numerous roles at the school by Principal Jacobs, and as the days pass and role into years, Holland spends less and less time on his own music.

Glenn and his wife Iris played by Glenne Headley have a child named Cole, and with each passing year Glenn Holland realizes he was born to teach. From leading the marching band to helping with the school musical, Mr. Holland, the man who thought teaching was his fall back choice, learns that he loves the job and the kids that he teaches. As he excels academically, his commitment to his family starts to unravel. His son Cole is deaf, and while Iris struggles to help their son adapt to the world, Glenn throws himself further into his work and the students he teaches. Years of parental neglect boils over in the teenage Cole, and after a prolonged argument with his son, Glenn learns to be the dad that he needs to be for his son, and the husband that Iris needs. School is important, his work is important, but Glenn Holland needs to find a balance in his life.

The film ends on a glorious and sad note as Glenn Holland retires due to budget cuts. For the first time he gets to play in full, the symphony he labored over for much of his adult life. Leading an orchestra of past and present students, the aged Holland showcases that important work. Richard Dreyfuss is perfect in this film. From the early moments of 1965 Dreyfuss dominates every scene with a controlled and emotional portrayal of the average person. Glenn Holland has big dreams but is sidetracked by the obligations of life. He took the teaching job because he needed steady income. Holland thought it would allow him more time to work on his own music, and, it brought his life in a whole new direction.

Richard Dreyfuss is a perfect vehicle for the music teacher that at first feels uncomfortable in his own suit as he walks through the halls of John F. Kennedy High School, but revels in the joy of leading the marching band as they parade down main street. Dreyfuss attracts acclaim for his portrayal because it feels real. We watch as Holland gets sucked into the requirements of teaching and we see how he changes as he spends more time in the classroom.

The scenes with Terrence Howard’s Louis Russ are touching, but also an excellent example of how when a teacher believes in you, and pushes you, you can succeed. Russ is not musical, and it is Mr. Meister who gets Holland to bring him into the marching band so that he will be able to make the wrestling finals. Russ wants to succeed but is failing. Holland tells his friend that he can’t help the kid. The dialogue between the two colleagues/friends is a cornerstone of what teaching should be about.

Meister says to Holland that he has a willing kid who will work hard. If he can’t teach a kid like that, then he is a poor teacher. Needless to say, Holland is successful, and Russ is the star of the marching band on the drum.

Louis Russ has an important arc that spans past Terrence Howard’s screen time. Years later, Holland and another student, who is an antagonistic member of the class, attend a funeral on a Saturday morning. This is part of the detention the student must serve. Holland explains that the funeral is for Louis Russ, a student he taught who had no musical ability except a desire to learn. The dialogue between Holland and Meister after the funeral is so sad for the small amount of discussion they have. These two teachers nurtured this student along, only to watch him die in the Vietnam War.

Dreyfuss shines in every scene in the classroom, his fondness for Olympia Dukakis as the principal and the sadness that overcomes his face when she retires, is heartbreaking. Holland knows how much of an impact she has had. To lose her is like losing a part of himself, but he goes on.

The family dynamic with Iris and his son Cole is what hits the heartstrings so much throughout the film. Glenne Headley was brilliant as the tortured wife who just desperately wants to talk to her son. The argument in the kitchen about going to a deaf school, and the rage that comes out of Headley’s Iris will make viewers weep. This poor woman just wants to tell her son that she loves him. Cole’s later anger to his father’s slights brings out the most touching portion of the film. Glenn starts to pay attention and finally looks for ways to engage his son through music. His concert at the school with sign interpreters is what Glenn Holland should have been doing ten years before, but at least he learned and grew as a dad.

Richard Dreyfuss’s rendition of Beautiful Boy for Cole is the greatest emotional statement the actor has made on the stage. In that moment of sheer vulnerability, Dreyfuss makes Holland real, brings the pain that Iris, Cole, and Glenn have felt, and makes an emotional plea to his son that he hasn’t been forgotten. Glenn loves Cole, and how else to prove his love for his family, but through music.

Glenn Holland had always wanted to write the next great symphony. He got lost in the trappings of academia and the needs of his students. Holland conducts his symphony with an orchestra of past students. He wrote two symphonies, the one on the paper that is played with the instruments, and the lives he touched as the students’ teacher.

Thirty years of teaching, thousands of kids inspired by the work of Mr. Holland, and when it comes down to dollars and cents, Principal Wolters, who was Vice Principal when Holland started in 1965, states that if he is forced to choose when budgets are concerned, he will always choose math and language over music. Glenn Holland has devoted three decades of his life to education, and all the great work that he has done is ignored. The Principal who has watched his impact on the kids, the kids who he taught who now chair the school board who are pushing through with the cuts to the arts program, it feels like Glenn Holland’s work is all for nothing.

The concert at the end of the film proves that the symphony he always wanted to create were the kids he taught, from young to old, the impact this man had on their lives will not be forgotten. Richard Dreyfuss again is brilliant in his last few minutes of screen time. He not only plays the older Holland well, but when he is brought into the auditorium and feels the love that is in that room for him, his facial expression says it all. For the last five minutes the camera is focused on Richard Dreyfuss, as he sits and listens to tributes about his life, and the positive role he had on so many lives, the camera never leaves his face. Dreyfuss barely says a word in this last act, because he doesn’t need too. Richard Dreyfuss conveys all the emotions with his facial gestures.

Yes, this movie is schmaltzy and purposely tugs at your emotions in all manners. There are stereotypical scenes throughout the film, football players would only join the school play as a joke, teachers arguing at staff meetings, a vice principal who is constantly looking for dress code infractions, and the lead character who doesn’t want to do the job but ends up loving it.

See It. There is sentimentality and emotion at every minute of the film. Mr. Holland’s Opus is a throwback to the Frank Capra classics of the ’40s, but twenty-four years after the film was released Mr. Holland’s Opus still holds up, and the message of the story still resonates today. Currently education has a focus on math and language skills. If budgets need to be cut, then the arts programs are the first to go. Not much has changed since 1995. If anything, Mr. Holland’s Opus seems more relevant now then when it was released.