Touchstone and Beyond: A History of Disney’s “The Insider”

Touchstone’s 1999 film The Insider focuses on a different aspect of history. This is the story of the whistleblower Jeffrey Wigand and how he blew the lid on the secrecy of the tobacco industry in the mid 1990’s. Directed by Michael Mann, starring Al Pacino, Russell Crowe, and Christopher Plummer, The Insider had a massive budget, but was a box office failure. Awards season would be kind and laude the film with multiple nominations and wins.

Is The Insider worth watching? Let’s find out. 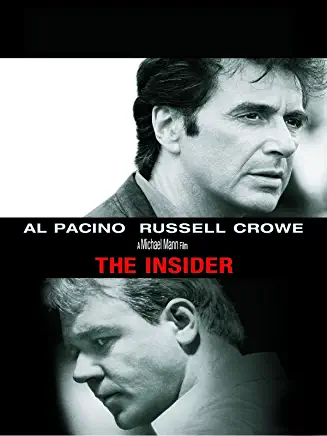 Starting out in two distinct locations we meet “60 Minutes” producer Lowell Bergman, Al Pacino, blind folded and on his way to a meeting with an important Iranian figure. Through a blindfold, Bergman arranges an interview for Mike Wallace of 60 Minutes with the Middle Eastern sheikh. From the streets of the Middle East we are brought to Kentucky, where tobacco executive Jeffrey Wigand, Russell Crowe, is packing his belongings because he has just been fired from his high paying executive job at the Brown & Williamson tobacco company.

From these opening moments, viewers are plunged into a film that is all about two different worlds. Wigand and Bergman are from different walks of life, and through chance they are brought together where Bergman learns that Wigand has a story to tell about smoking and the tobacco industry. Bound by a stiff non-disclosure agreement, Wigand wants to talk but he needs to protect his family’s interests.

Jeffrey Wigand, with some prodding by Bergman and threats by his former company, wants to unload the burden that he knows, which is that tobacco companies know the chemicals they have been using in cigarettes are bound to get people addicted. Wigand sits down with famed reporter Mike Wallace, Christopher Plummer, and tells his story. He even gives a deposition in the state of Mississippi lawsuit against the tobacco companies, so that his interview can get around the non-disclosure agreement, but CBS won’t run the interview for fear of a multi-billion-dollar lawsuit by the tobacco industry.

A smear campaign has been started by the tobacco industry to demean Wigand, and it’s up to Bergman to protect his source and disprove all the falsehoods coming out. Once a former top-rated executive with a huge salary, Wigand is torn down to rubble. He now teaches high school science. His wife has left him, and he only sees his daughters a couple of times a week. But finally, his interview is aired, and his daughters see him on tv. For Jeffrey Wigand, it took some time, but his choice was proven right.

Al Pacino is perfect in this film. In many Pacino roles there is the explosive Pacino who is loud and wild and unpredictable. Here, Pacino is a normal guy in a normal role just trying to tell a story. His Bergman is nothing special, just dedicated to the job, and likable to all ends.

Christopher Plummer as Mike Wallace is a character on his own. When Plummer walks into the frame he dominates the camera with his appearance, his clothing, and his demeanor. Plummer’s Wallace is an unstoppable force that wants to tell the story, whatever it may be, and he will allow no one to get in his way.

The scene when 60 Minutes producer Don Hewitt says they will run an abridged version of the interview is so devastating for Bergman because Wallace agrees with Hewitt which pulls the rug out from under Bergman. Wallace and Bergman were always in lock step with each other and their camaraderie was the perfect pairing. Wallace always seemed to be in sync with Bergman, when he agrees with Don, it shatters the relationship forever.

Russell Crowe is starting at the peak of his trifecta of brilliant performances at the start of the 2000’s. His Wigand is a tortured soul who knows too much and will greatly unburden himself of this knowledge if allowed. Wigand wants to do what is right, and has his life destroyed for his actions. Crowe is restrained like Pacino and plays the former executive with a note of sadness but also delicacy. Wigand can’t even make it down the hill without falling while chasing after a car. Seeing a bullet left in his mailbox is a moment of terror that Crowe perfectly captures with his facial expression.

Pacino and Crowe’s characters are a mesmerizing duality of two characters joined together based on the story but living in different worlds. Director Michael Mann shows this dichotomy when Bergman calls Wigand to tell him that the interview has been shelved by CBS. Bergman is on a beach at dusk surrounded by the whole world that is open to him, while Wigand has sequestered himself in a hotel suite across the street from his old company. Bergman walks in the dusk into the ocean so that his cell phone can have better reception while Wigand paces in smaller and smaller circles as if the world is collapsing in on him. The visuals of this conversation tell us everything about the lives of these two men.

While the film is based on the true story, certain liberties had been taken to the narrative for filming purposes. At the end of the film after Wigand’s interview is aired, Bergman leaves 60 Minutes. That was not the case in real life. Bergman claimed that the film was not documentary but more of a historical novel. Liberties are taken when telling a true story.

Russel Crowe has a habit of pushing his glasses up constantly throughout the film. It’s very distracting.

See It! This is a riveting tale of corporate greed and how difficult it can be to do the right thing. Wigand’s life was destroyed for talking about what he knew. He knew this could be the case, and still proceeded to tell his story. This is a film that shows how powerful some lobbies can be, why change is difficult, and how sometimes people need to unburden themselves to have a clear conscience.

Pacino, Crowe, and Plummer are dynamite actors on the screen, and you will be hooked from the opening moments until the credits. There are no loud explosions, car chases, or killer robots. Sometimes a true story with great actors makes the best film.