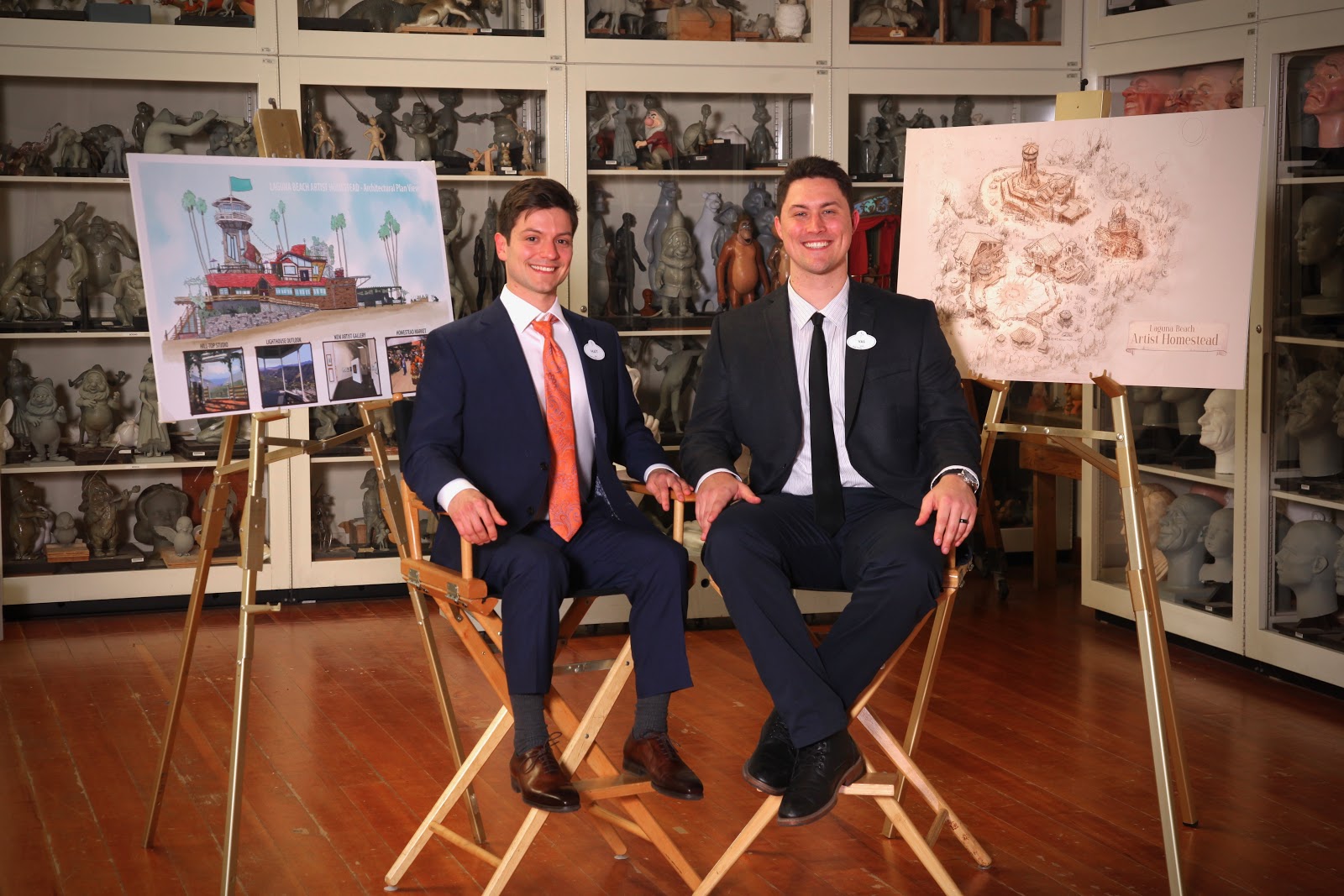 Last week, the 29th annual Disney Imaginations contest came to a close with a team from Laguna College of Art and Design (LCAD) amongst the group of finalists. This year, teams were tasked with “creat[ing] an iconic installation at the contestants’ own campus or city that serves as an inspiration, honors the past, and is a vision of the future.” The group’s project, Laguna Beach Artist Homestead, is “a whimsical reimagining of the historic Laguna Artist colony which would eventually become the city of Laguna Beach.” I got a chance to speak with Matt Mooney and Val Laolagi to ask them a bit about their project, its inspiration, and the experience as a whole.

Q: What is your background in school and what interested you about the project?

Matt: My major is Illustration in entertainment design and it's a new major sort of emphasis that LCAD just put out. So we're the first graduating class and Bailey MK, who does outreach for the imaginations project came to LCAD and Val attended that talk. Then I heard about the project through Val.

Val: Yeah and like Matt I'm from Art plus design with the major Illustration in entertainment design. MK just stopped by, through the outreach program, and gave some big oversight to the project, and I was very interested in it. Matt and I had actually just graduated this past spring.

Q: Can you tell me about your project?

Val: Okay. Yeah, so our project is via Laguna Beach Artist Homestead and it's a place where families, pretty much everyone, can come and enjoy and experience being an artist and their creativity.We paid homage to Laguna Beach's cultural background of the arts being down by this kind of artist colony. So we really went into that as far as wanting to emphasize the arts in our project. We captured the artistic culture as well as the community that has a real keen eye for observation, tried to protect the surrounding beaches as well as land, and then also there's a strong gathering of tourists and guests throughout the year. Our project was kind of a place to give everyone who visited a place to come and enjoy creativity.

Matt: This is based on Laguna Beach. So our town, it was kind of like a no brainer to do something that was focused on the arts and creativity. It cultivated a sense of artistic community. It's like a place where you can go and look at a lot of art and this is a space where you can go and get your hands dirty and get involved in the arts and get creative. It's like the spirit of the original beginning of Laguna Beach town.

Q: Did you have any personification of that spirit throughout or is it more of the overall feel of the place?

Val: It was definitely inspired by the architecture that is surviving in Crystal Cove State Park, and it's just a couple miles north of Laguna. They do have surviving architecture and also restored architecture there that we really drew inspiration from and then added our own layers of creativity on top of that.

Val: It was pretty fast paced. We were able to meet because we both live close to each other. I think we met anywhere between three and four times a week to sketch out ideas, concept things out, to trade off. We worked pretty much in tandem throughout the whole thing. But then we would go home or at our school and spend a few days concepting out more individual ideas that we really were passionate about and then would reconvene and go through the process over and over again. It was a very collaborative effort. I have to thank Matt for being a great teammate in the aspect that he was available to meet so much as well as wanting to be so collaborative on this project.

Matt: We were able to meet at school, which was a great place. And also inspirational too, meeting at Laguna, very, very near to the place where we would actually envision the place, The Homestead, being. Then meet, sketch, come up with a bunch of ideas, and take that back to our studios and really get into it. And then meet back up and show each other our progress and continue that until we really had something that came together.

Q: How did you feel you worked together as just a group of two?

Val: It's very rare that you get to work on a project like this with a close friend. Over the years we’ve grown close as far as friendships go, but also had classes where we could kind of collaborate together. And so I think working at the pace that we had to work at really, really helped that we were friends and even a team of two. We originally had a few more members who wanted to be on the team, but they couldn't commit to the amount of time. It was a very fast paced project. I'm happy that it was two. I think it would have been great to have more friends of the project, but like I said before. Matt really knocked it out of the park.

Matt: I can't complain about only having two on this project. I think we were both very prepared for the workload and then just graduating Laguna, which you know, is an art school with high standards but also a place where you're really encouraged to grow. And it is a fast paced working environment, and there's a lot of quality work that's expected out of us. I think we were very prepared to work on this project and the pace was no problem.

Q: What was the best part about the actual presentation week?

Matt: Well I'm ready. I definitely loved meeting so many new people. That's probably number one just from all the other contestants and everybody was so nice. Everybody at Imagineering also was so nice. It's just crazy how kind everyone was and how excited everyone was to be a part of this week, whether they were putting it on or participating in it. Also seeing the artwork that was there was very humbling and inspiring.

Val: Yeah, I have to agree with Matt. Meeting the different contestants was great. Getting to see the final installment, their projects was very exciting. Getting to see the diverse background there was. I believe they're all students, I don't want to speak for anyone but I believe everybody else was students. Also getting to see Imagineering and behind the scenes of everything was very exciting. And all the Imagineers, we got to have a lot of one on one time with them. They showed us labors of love, all the stuff they worked on and it was very cool to see all that stuff.

Q: What was your favorite part of working on the project as a whole?

Val: I think it was great that we got to be in a very collaborative environment. You know, I can't say what it's like to work with bigger teams, but the fact that Matt and I were friends, we were close and he's very great about wanting to collaborate. So I never felt like we were stepping on each other's toes where it was, “Hey, I'm going to sketch this out. Okay, you're going to draw a better iteration of it. You can give me a sketch on a sticky note and I would do variations of it.” So being able to work within a team that was so dynamic and willing to collaborate was great. I feel like we pushed the idea along, the story, even the concept art and it was a very fast pace, which, I don't know if that's usual or not, but it was a great experience for me to be part of this very collaborative and very focused team.

Matt: Definitely. Yeah, I agree with that sentiment for that one. I know if it was a solo project, I don't think I would've done it. To have that other person there to get excited about sharing work and say “Oh my gosh, I had this idea. What about this?” It's just that collaborative brainstorming process and then the sketching. Having someone to bounce ideas off of was huge. It's like motivation and encouragement to really come up with some great ideas and prompts some great work.