Touchstone and Beyond: A History of Disney’s “Adventures in Babysitting”

July 3rd, 1987 brought to the silver screen Touchstone Pictures’ summer release of Adventures in Babysitting. The world was introduced to Elisabeth Shue in her first lead role, director Chris Columbus in his first feature film, and Anthony Rapp, who would make his mark on Broadway in Rent.

Is Adventures in Babysitting worth a watch? Let’s find out. 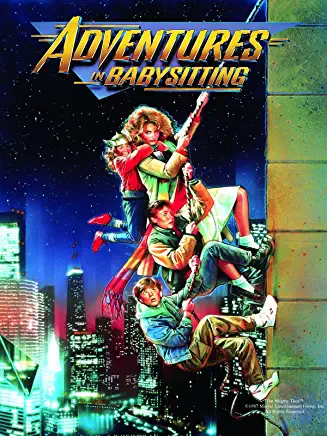 High schooler Chris Parker, played by Elisabeth Shue, is excited for her anniversary dinner with her boyfriend Mike, played by Bradley Whitford. When Mike unexpectedly cancels, Chris is depressed but takes on a last-minute babysitting job for the Anderson family.

What looks like a quiet evening of babysitting Sara, Brad and his friend Daryl, turns into a terrifying action-packed night. No sooner then five minutes after Mr. and Mrs. Anderson leave, does Chris gets a frantic phone call from her friend Brenda, played by Penelope Anne Miller, who needs Chris to pick her up at the bus station in downtown Chicago. Chris reluctantly agrees to help her friend and brings the kids along.

While Brenda sits at the bus station and imagines all kinds of terrifying things, which don’t really happen, Chris and the kids endure a flat tire, a domestic dispute, having to escape from a chop shop, gang warfare on the subway, being pursued by the criminals from the chop shop, and getting back to the Anderson house before the parents return home.

A stop at the restaurant where Chris and Mike were supposed to have their dinner, reveals that Mike has been cheating on Chris, and allows Daryl, played by Anthony Rapp, to have his revenge on the bully Mike.

When not dodging bullets and knives Chris makes friends with a car thief named Joe Gipp, played by Calvin Lewis. A stop at a college party introduces Chris to Dan, played by George Newbern, who helps them get the money to pay for the flat tire.

The car is retrieved from Dawson’s garage and after bartering with Dawson, played by Vincent D’Onofrio, Chris gets the kids home in time before Mr. and Mrs. Anderson. Dan shows up at the Anderson’s with Sara’s lost roller skate, and it looks like even though Chris has had the wildest night of her life, it ends on a positive note for the babysitter.

Elisabeth Shue is perfect in this role. She carries the film well, and though much of the story and situations that the cast are placed in are ridiculous, Shue brings her skills to the screen to add credence to film. Whether she is singing the blues at the Silver Dollar Club or trying to stop a gang fight on the subway, Elisabeth Shue is fantastic in this film. This was her first lead role, and she holds her own in a silly movie that makes the audience suspend their disbelief five minutes after the babysitting gig starts.

Maia Brewton as Sara is a perfect combination of charming, funny, and cute. As the group is trying to flee the chop shop, Daryl asks what if he falls from the steel beam. Sara looks at him with her bright eyes and positive attitude and tells him she won’t let him fall. Daryl is touched by this, and the moment reminds audiences that these are good kids.

I like the duality of what’s happening on this night in Chicago. Chris and the kids are brought into this mess because Brenda made an irrational choice to run away from home. Her panicked phone call sets the stage for the story, but at no time was Brenda ever in danger. Meanwhile Chris and the kids are in mortal danger while trying to pick her up.

When they get home safe, I love how Chris tells the panicked Brenda to just go home and then slams the door on her. It’s a fitting end to Brenda, and appropriate since her actions are what caused all the trouble.

Sara loves Thor from Marvel comics, and at one point early in the film Brad makes a homophobic remark about Thor to get under Sara’s skin. It’s not funny and would never be allowed today thankfully. In an otherwise lighthearted film, this statement stands out as offside.

See it! Adventures in Babysitting is a hilarious comedy from the 1980s that is preposterous in every way and will surely keep the audience laughing. Elisabeth Shue is funny, and the supporting cast is excellent. There are constant laughs between the lunacy of this crazy evening.

Watch this film. Relax and enjoy the zaniness of one wild night of babysitting.