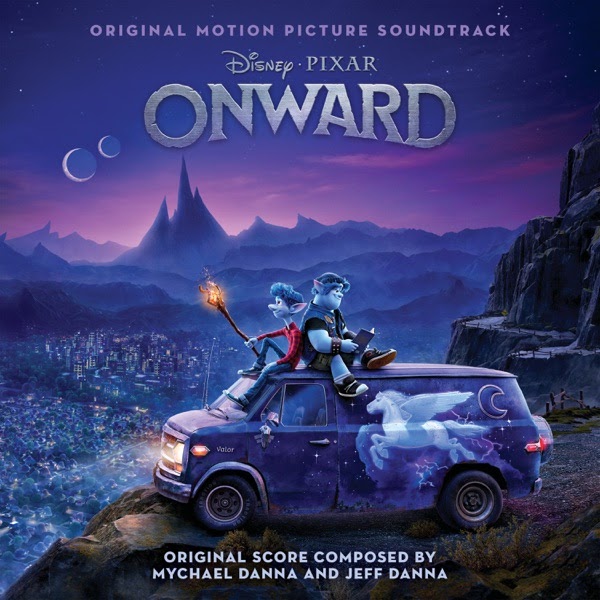 Pixar’s Onward is now in theaters, taking audiences on a powerful adventure with brother Ian and Barley Lightfoot. One of the things that stays with you is the musical score by Mychael Danna & Jeff Danna, who previously worked with Pixar on The Good Dinosaur. They have produced some incredible music for this family adventure and it can all be heard on the Onward Original Motion Picture Soundtrack.

The first track is the end credit closer by Brandi Carlile, “You Carried Me With You.” Her folk pop style is perfect for the film as the genre is all about generational storytelling, which is at the core of the film. The style may be incongruous with the rest of the score, but I love the song and the message within it. This is a perfect song to add to your family road trip playlist.

The rest of the soundtrack is forty-four tracks of score by Mychael Danna & Jeff Danna amounting to about an hour of solid music. Being a modern fantasy set in a world with creatures like elves, trolls, fairies, and mantacores, the score borrows musical elements from the fantasy genre. Expect to hear lutes, chimes, harpsichords, and high-pitched chorals.

There are quite a few themes that play throughout the score, but the most memorable and frequently used melody tends to underscore Ian’s character. It’s a lighthearted, bouncy melody that can be played uplifting, like on “A Little Magic,” subdued like on  “New Ian,” sad on “Share My Life With Him,” and adventurous on “Voltar Thunderseer!”

Barley is typically underscored with rock and roll styles. “My Mighty Steed” is the first example on the album, but my favorite track for his character is called “Dance Fight,” which underscores the scene where Ian and Barley dance with their half-dad. That is actually my favorite track on the entire album and it could almost be a pop song if it had lyrics.

A sad theme that underscores the feelings both boys have for their father is first heard on a track called “Wish I Could Spend the Day with You.” The melody is a little reminiscent of what I refer to as “Ian’s Theme,” but it is mostly made of minor chords and rarely feels uplifting. The time when it does feel joyous is at the end of a track called “Dad.”

The theme that kicks off the entire album tends to underscore the most magical moments in the film. Tracks like “Quests of Yore,” “The Spell,” and “Find Another Phoenix Gem” have an almost Danny Elfman-esque tone that is frenzied and heart racing.

There’s also an adventure theme, first heard in a rock-style on “Going on a Quest.” It returns in more of a traditional score arrangement on “Led Us to Our Victory.” Other themes that don’t get reused often include one for the pixies (“Pixie Dusters”), a more suspenseful theme used at the film’s biggest climax points (“Driving Test”), and a theme for Colt Bronco (“Tracking Guinevere”).

The Onward Original Motion Picture Soundtrack features all of the great musical themes by Mychael Danna & Jeff Danna that were stuck in your head when you left the theater in addition to the Brandi Carlile end credit anthem that ties the message of the theme together. If you loved the music like I did, you won’t want to pass up the opportunity to listen to it again and again on wherever your own quest takes you.