The Trees of Disneyland: The History and Storytelling of the Park’s Horticulture

With over 3,000 species of plants, the Disneyland Resort is one of the biggest gardens in the world. Needless to say, the Disneyland horticultural team spend a lot of time keeping the floral aspect of the park magical. Among the over 18,000 trees and 125,000 shrubs on the resort property, there are many that play a significant role in the landscape, whether as a historical tribute or as a land’s key narrative element. Here are ten of the Disneyland Resort’s most important trees. 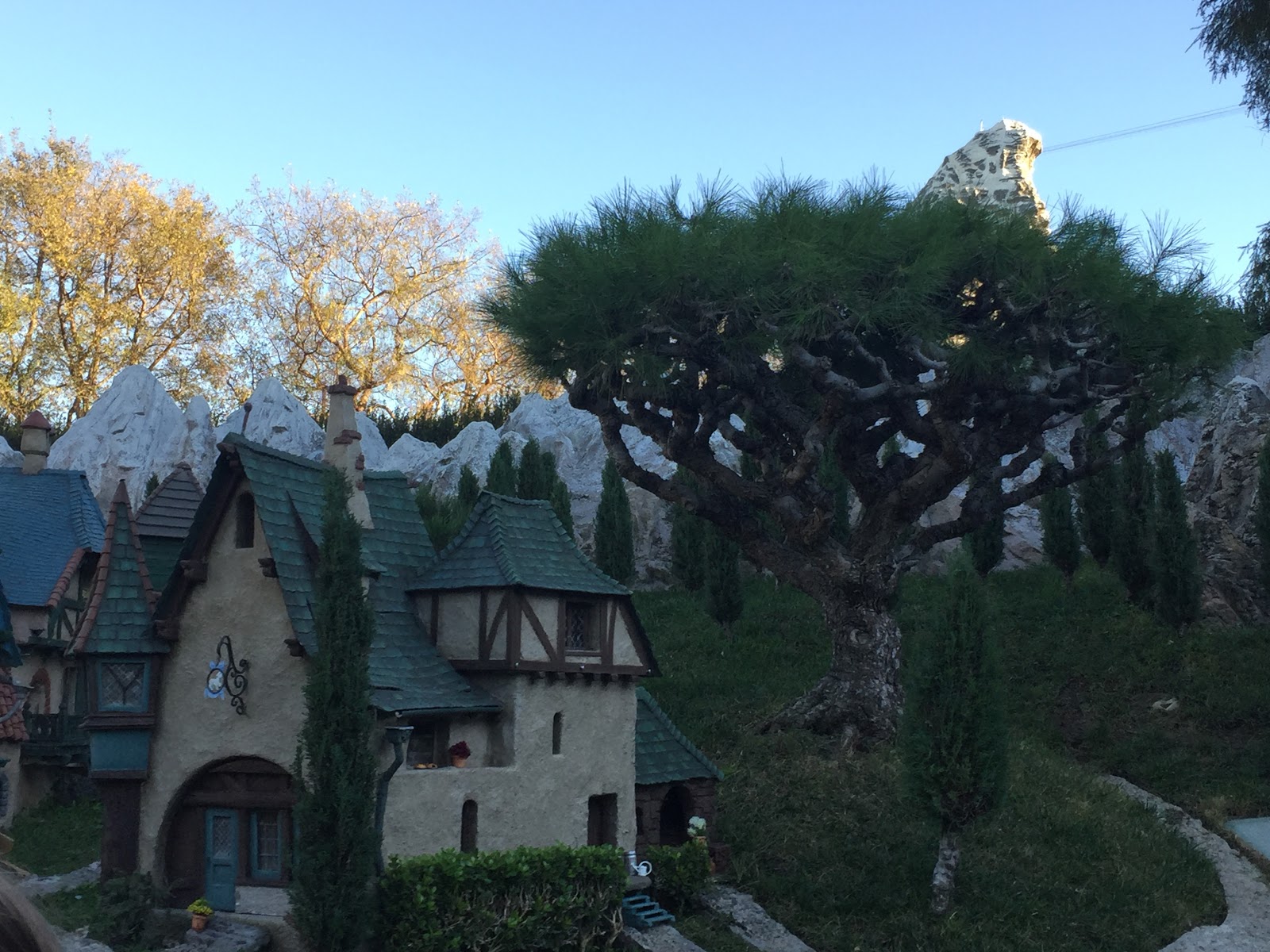 After passing through Monstro’s mouth on the Storybook Land Canal Boats, immediately look to your right to catch this two-foot tall tree in Gepetto’s village. This tiny tree is actually the oldest living thing in the Disneyland resort, at over 150 years old. Like all the other trees in Storybook Land, this tree helps make the miniature villages feel more realistic. 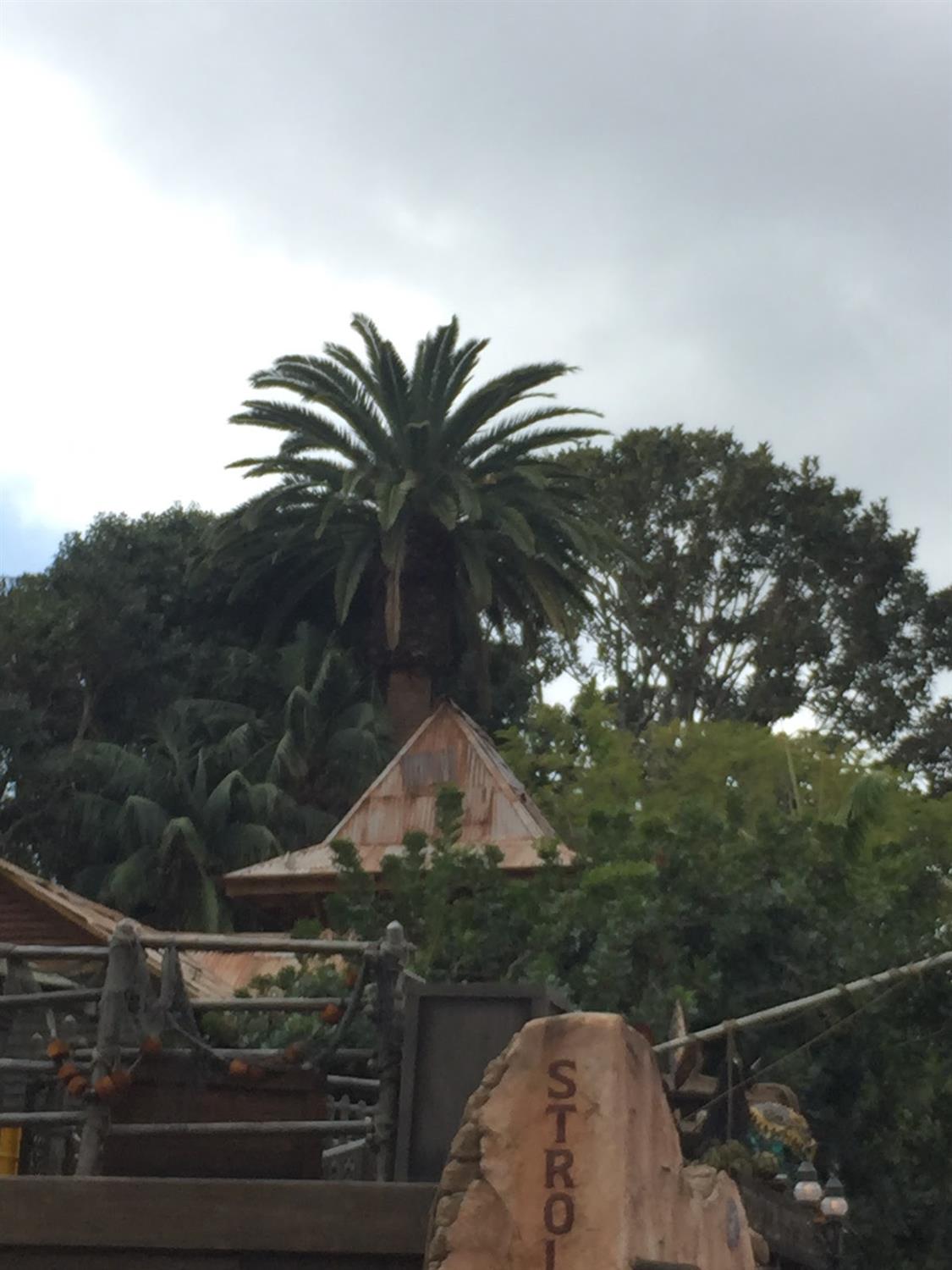 While the mugo pine is the oldest living tree at Disneyland, the Dominguez Palm has been on the property longer. Part of what’s now Disneyland was once owned by the Dominguez family and this Canary Island date palm was planted as a wedding gift in 1896. When Walt Disney sought to purchase the land from the Dominguez family, they had one condition for selling; the tree had to be preserved somewhere in the park. So, the date palm was moved from what’s now California Adventure to the center of Adventureland, next to the Jungle Cruise. When Disneyland opened in 1955, 19-year old Ron Dominguez got a job as a ticket taker and eventually became Vice President of Walt Disney Attractions. Now retired, he’s honored with a window on Main Street, U.S.A. 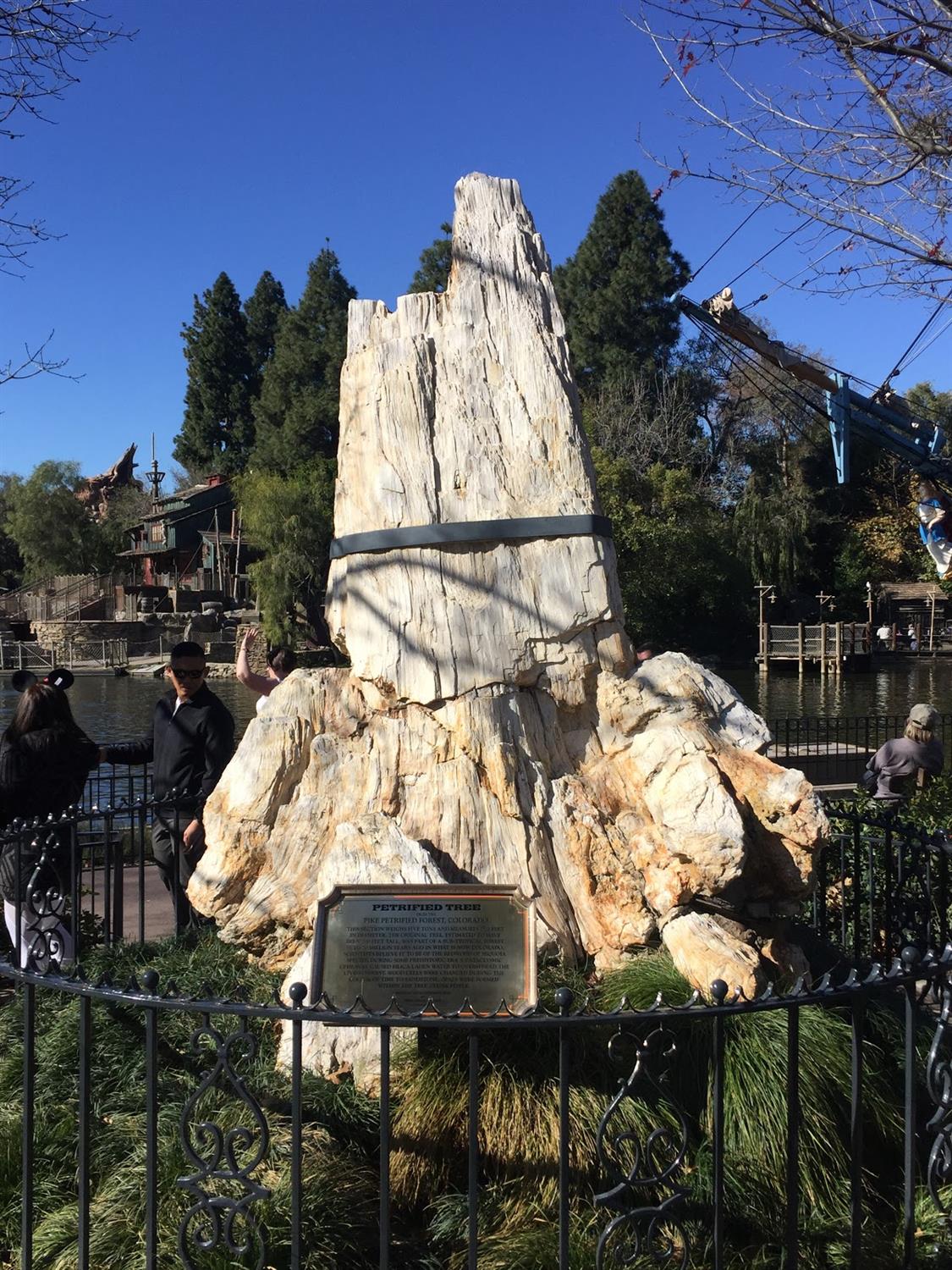 The oldest thing in Disneyland is over 55-million years old! The petrified remains of a prehistoric 200-foot tall tree, believed to be a redwood or sequoia, were preserved millions of years ago when silica-laden water spread throughout the tree and slowly transformed it into sandstone. Walt acquired the petrified wood in 1956 from a forest in Colorado and gave it as a gift to his wife Lilian, who gifted it to the park. It now resides in Frontierland, near the Golden Horseshoe.

The Little Man of Disneyland’s House In 1955, Disney and Little Golden Books released a few picture books to promote the new park. One of them, The Little Man Of Disneyland, was about Patrick Begorra, a Leprechaun who lived in Anaheim. When Mickey Mouse and friends came along to build Disneyland, they encountered Begorra, who agreed to let Mickey build the park in exchange for a tree to make his home in. During the 2015 D23 weekend, Imagineers placed Begorra’s home in the park. If you look at the base of the tree holding the sign for the Indiana Jones Adventure, you’ll find a little door, window, and chimney. Don’t knock, Begorra doesn’t want company. 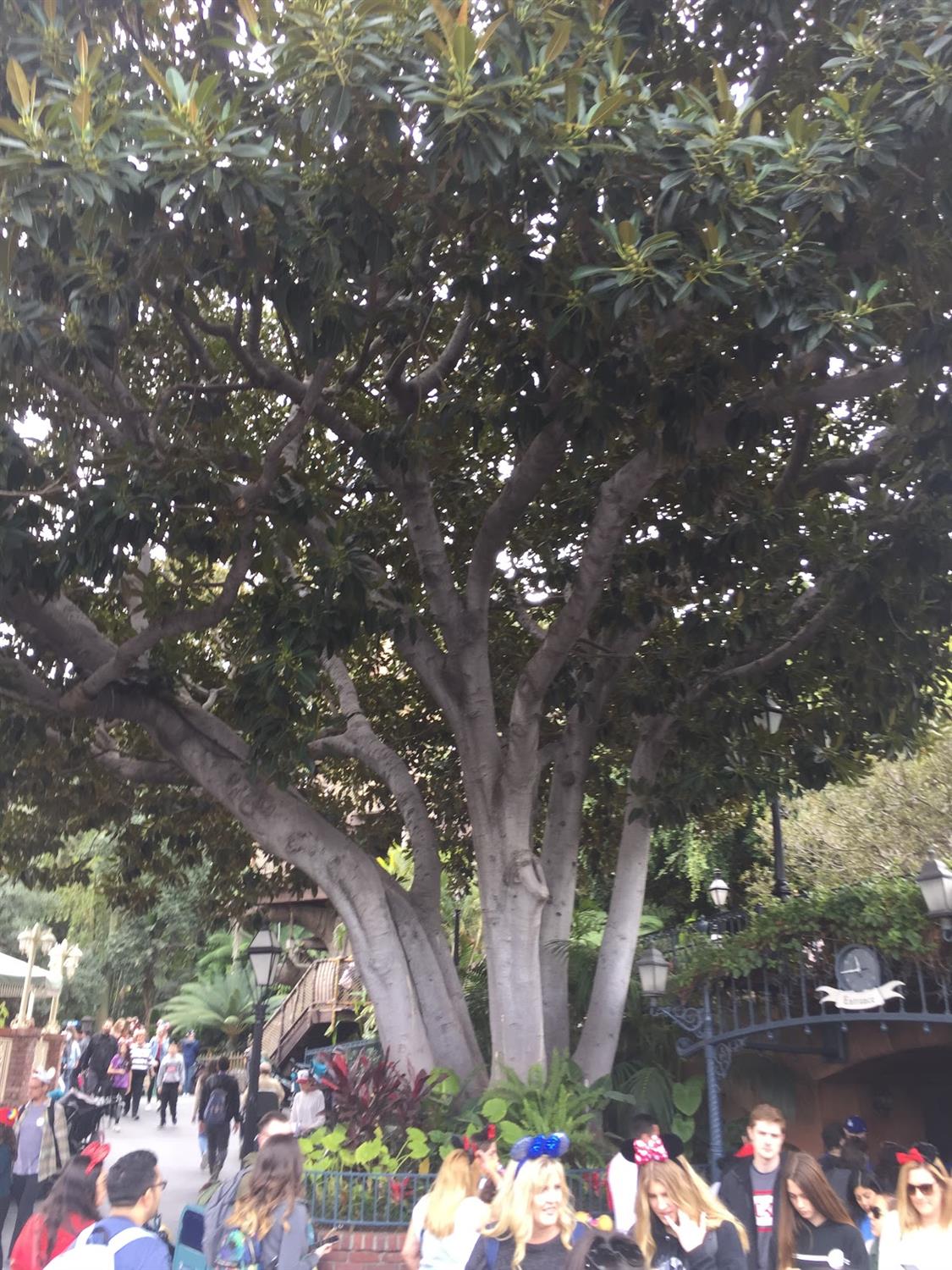 Horticulturalist Morgan Evans and his brother Jack were in charge of landscaping Disneyland. The Evans brothers searched far and wide for trees and plants to landscape the park, often finding them from unexpected sources. This fig tree located to the left of the entrance to Pirates of the Caribbean was donated by an oil company and actually has an oil pipe embedded in its roots. There are many subtle ways Imagineers transition you from one themed land to another. One example of this is the rosemary bush on the wall of the River Belle Terrace restaurant. This unique potted plant marks the dividing line between Frontierland and New Orleans Square. On the northside of the plant, there’s a white New Orleans style wrought iron fence, while south of the plant, it’s a wooden fence perfect for Frontierland. 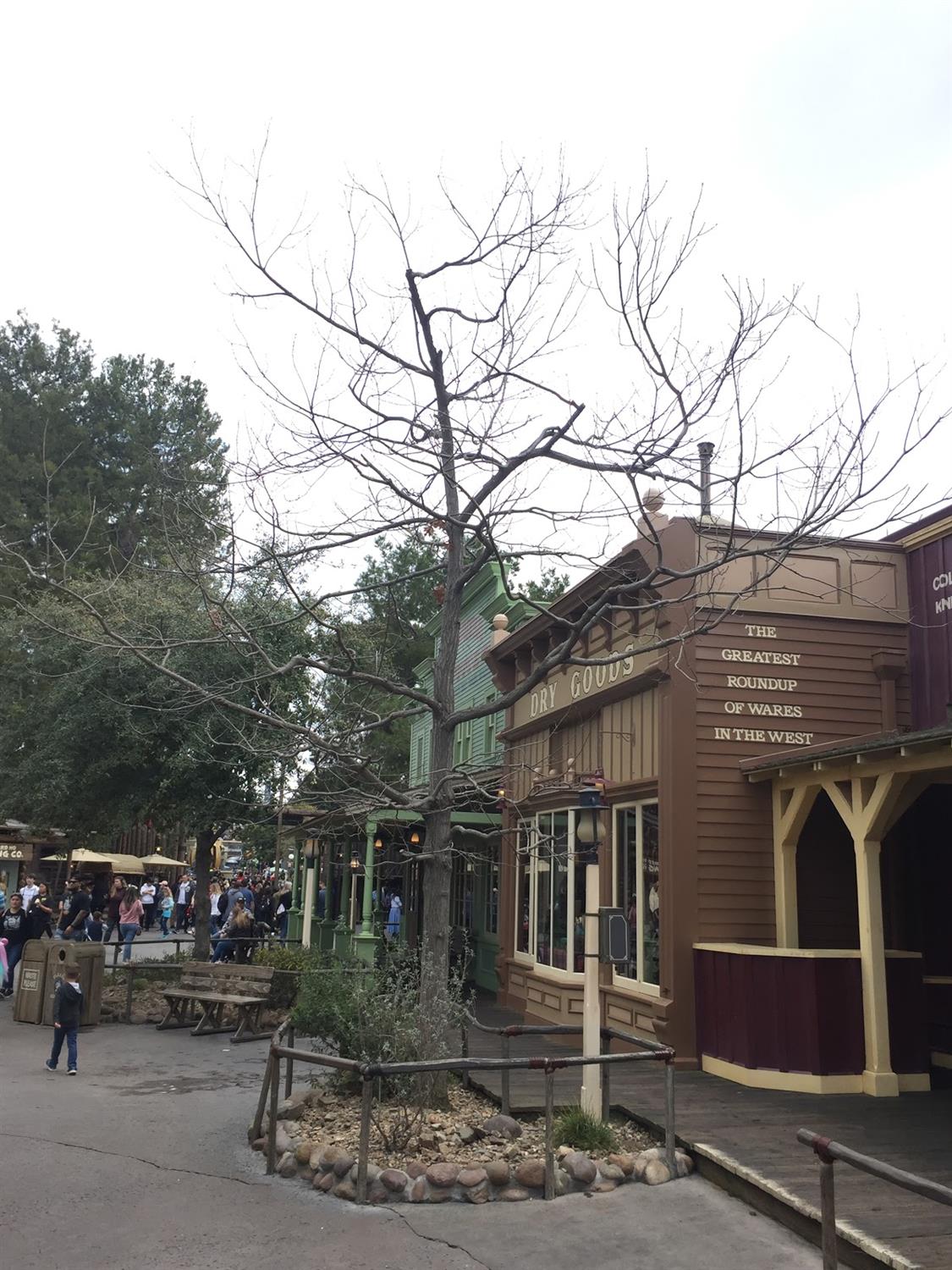 On Halloween night 2007, Disneyland dedicated this Frontierland oak tree near the Golden Horseshoe to writer Ray Bradbury in celebration of the 25th anniversary of his novel The Halloween Tree. Bradbury, who helped develop EPCOT’s Spaceship Earth, had long dreamed of having a Halloween Tree at Disneyland and was very excited to be a permanent part of the park. Every year, the Halloween Tree is decorated with orange lights and pumpkin ornaments. Imagineers have found other clever ways to preserve the immersive aspects of the park. If you’re in New Orleans Square, it would throw you off to look across the Rivers of America and see a snow-capped Alpine mountain. So, a tree in the hub is pruned in the shape of the Matterhorn so you won’t see the mountain while waiting for the Haunted Mansion. Star Wars: Galaxy’s Edge isn’t even a year old, but already has an important tree. According to the backstory of the planet Batuu, residents of the Black Spire Outpost make their wishes on this tree located near Savi’s Workshop. Batuuan tradition states that one should tie a string or ribbon to the tree and when the fabric disintegrates, your wish will come true. While this is a cherished tradition among villagers, off-world visitors are dissuaded from adding to the tree. Michael Darling
Michael Darling is a freelance writer whose words have appeared in the Los Angeles Times and Los Angeles Magazine. He can be found on Instagram at @lanonconfidential. Yes, that’s his real name.
Read Related Articles