Hamilton may be the talk of the world right now, but ‘To Touchstone and Beyond’ knows of another Disney produced film that has its roots in Broadway.

In celebration of the juggernaut Hamilton, ‘To Touchstone and Beyond’ dives into the film vault with 1992’s Noises Off. 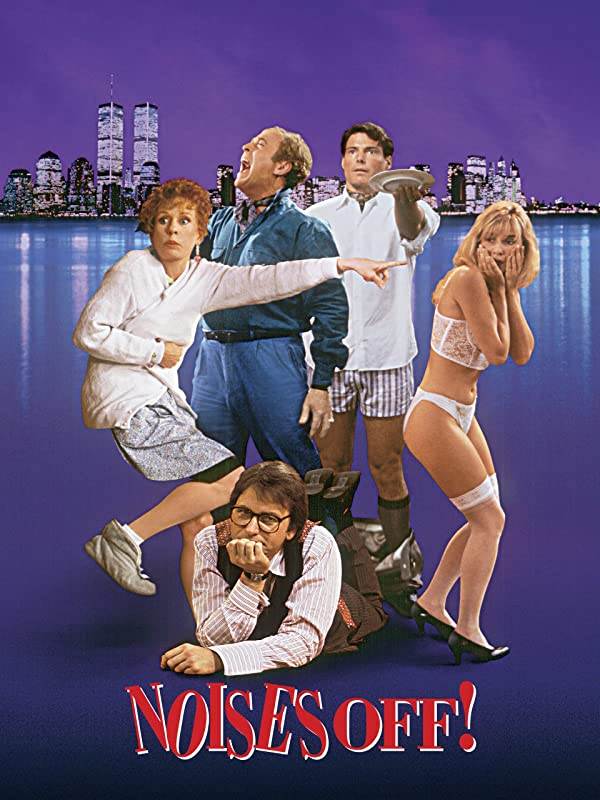 Lloyd Fellowes played by Michael Caine, is a nervous wreck. He can’t bear to sit in the audience as his play ‘Nothing On’ is about to premiere on Broadway. The pressure is too much for Fellowes and he flees the theatre just before curtains rise. Fearing the play will be a disaster, he spends the whole movie relating his rollercoaster ride with the plays acting troupe from the beginning.

We meet the actors Dotty, Garry, Frederick, Belinda, Brooke, and Selsdon, played by Carol Burnett, John Ritter, Christopher Reeve, Marilu Henner, Nicollette Sheridan, and Denholm Elliott as they rehearse in Des Moines, Iowa. It is the night before opening night, and as the clock crosses the midnight mark, director Lloyd Fellowes is alarmed at how ill prepared the cast is for their performance. They don’t know their lines, they miss their marks, and everyone worries that Selsdon is off drunk somewhere and not going to show up to perform.

Despite their awful night, the play is a massive success in Iowa, and the troupe travels on perfecting their roles. Lloyd goes off to work on another play and rejoins the troupe in Miami. It’s been a long journey from Des Moines to Miami, and the play and actors are about to be derailed in sunny Florida. Relationships that formed in Iowa have broken down and the vindictiveness of the cast has caused Lloyd to come backstage to try and bring order to the actors. Stagehands Poppy and Tim, played by Julie Hagerty and Mark Lin-Baker try to catch Lloyd up and what has been happening, but Miami is a disaster.

Knowing how bad things have got for the troupe, Lloyd can’t watch the impending doom of a Broadway performance. He does feel bad about abandoning his actors, so Lloyd dashes back to the theatre as the audience is let out applauding enthusiastically for the play.

Noises Off is incredibly funny. The humor is on multiple levels, and like a play, the three acts to the story uncover the level of wittiness throughout the story. When the troupe reaches Miami, the madcap backstage antics will make the audience laugh until they cry. I couldn’t believe how funny the story was backstage as the cast collapses on themselves and tries to sabotage each other’s performance.

Director Peter Bogdanovich has done a masterful job at capturing the zany madcap slapstick comedy of this part of the movie. Viewers, between fits of laughter, will be in awe at the precise timing and choreography of the actors as they transition from scenes while battling backstage. The sheer lunacy of the actors trying to keep the liquor bottle away from Selsdon is pure cinematic genius.

The Miami performance is layered with multiple funny moments that will crack up the audience, from Caine’s exasperated Fellowes watching his play crumble before his eyes, Carol Burnett trying to kill John Ritter with an axe, or watching Julie Hagerty and Mark Lin-Baker announce inconsistently how many minutes before the curtain will rise, the audience will revel in the lunacy of the story.

Denholm Elliott is magical as Selsdon Mowbray. Elliott always lights up the scenes he is in and though he is written off as unreliable, and the audience expects Selsdon to not show up, Elliott brings him into the scene with a gentle entrance that makes you wonder if Selsdon is perhaps the only normal person in the cast. This is Denholm Elliott’s last onscreen performance, and what a lasting performance of pure brilliance. It’s difficult to play the bumbling drinker, but Elliott manages to perform the role with gusto and ease.

Christopher Reeve portraying a dim-witted actor couldn’t have been an easy task, but he does it with joy. His Frederick needs constant reassurance about his character, but what makes his Frederick such a delightful idiot is his nosebleeds whenever he sees violence. Reeve stands out in a role that might get overshadowed in a lesser actor’s hands.

No one could portray Lloyd Fellowes like Michael Caine. Caine is perfect as the stressed director who just can’t take the ridiculousness of his actors, but somehow needs to control his rage. Caine is biting in his criticism and hilarious as he uses his humor like a whip to motivate the disorganized cast.

The first act of the film where the cast is rehearsing for the show in Des Moines can be a little tedious. Thanks to Caine’s frustrated director, the audience will make it through this chunk of the film and be rewarded with a glorious unhinged Miami production.

See It! Noises Off is a comedic treat. It stands out for its hilarious story line, mad cap antics of the cast and for the delightful story that will entertain the audience. The cast is superb and with Michael Caine’s cranky director you can’t help but empathize with him as the wheels of the play come off the track. The Miami Beach scenes are sheer lunacy and a cinematic delight. I cannot imagine the amount of rehearsal the cast needed to make those split-second scene changes happen, while trying to maintain a quiet environment backstage as the play is proceeding. Watching the cast dissolve into full out war backstage will make you laugh until tears roll down your cheeks.

Noises Off is brilliant. While it didn’t get the box office success or critical praise that Hamilton is getting, Noises Off is a must see and a gem in the Touchstone Pictures library.

Next week ‘To Touchstone and Beyond’ checks out another summer flick with Ernest Goes to Camp.