Legendary voice actor Jim Cummings recently joined the Walt Disney Family Museum’s Happily Ever After Hours event to answer questions from fans about his incredible career. As the voice of Winnie the Pooh and Tigger, Jim Cummings began his Disney career with preschool programs on Disney Channel like Dumbo’s Circus before voicing character on multiple Disney Afternoon shows like The Adventures of the Gummi Bears, Darkwing Duck, Chip & Dale: Rescue Rangers, and Goof Troop. His work has also extended into Disney animated features like The Lion King and The Princess and the Frog, as well as 20th Century Studios’ Anastasia. Here are 10 things we learned from Jim Cummings. 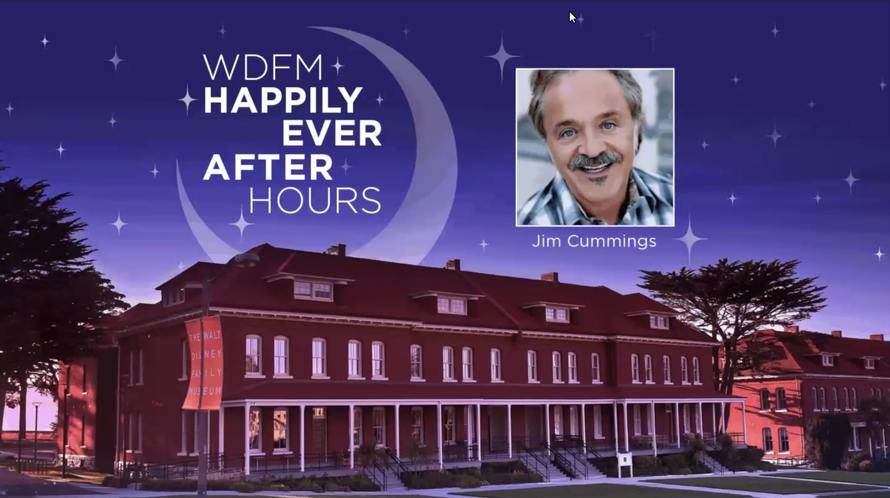 1. Living in New Orleans inspired the voice of Ray in The Princess and the Frog.

“I moved there as a kid right out of high school and I was a deckhand for years and often I would be the only person on the boat who spoke English,” Jim Cummings shared about his introduction to Cajun. “One of the first times I ever did it was for Teenage Mutant Ninja Turtles and I was the big gator from down there in the swamp.” The accent also helped him get work on some Scooby Doo projects, but one of his most memorable characters, Ray from The Princess and the Frog, was born out of his years in New Orleans. “All I was doing was the impression of the very first guy I was ever on a tugboat with.”

2. Singing is one of Jim’s passions.

“I’ve been singing since I was 5 or 6,” Jim shared about his musical abilities, which have allowed him to be the singing double for Jeremy Irons as Scar in The Lion King (“Be Prepared”) as well as Christopher Lloyd as Rasputin in Anastasia (“In the Dark of the Night”). “I was the lead singer for the California Raisins,” he also shared about some commercial work he did in the 1980’s and ‘90’s. “I’ve got to sing for a lot of people and Pocahontas was one of my favorites. It was interesting because Alan Menken was directing me from singing too well. I said I’ve never been accused of singing too well, so this will be easy.” Jim Cummings also recalled a funny anecdote about recording a demo for the song “Savages” from the film. “They didn’t have all the words down, so they were calling it ‘Sandwiches, Sandwiches, I’m not Randy Newman.’”

“He was a great guy, his heart was so big,” Jim Cummings shared about the actor. “My biggest kick was meeting him from Otis Campbell on the The Andy Griffith Show.” While working with Hal Smith on Dumbo’s Circus, he brought his brother to the studio one day who told Hal he hopes he’s not offended, but he looks just like Otis Campbell. “I had a ball doing that show.” Hal Smith was the original voice of Owl in Disney’s Winnie the Pooh shorts and took over the voice of Winnie the Pooh on the show Welcome to Pooh Corner. “He was there for The New Adventures of Winnie the Pooh and that was great, I loved it.”

4. He didn’t think his Tigger voice was good when he auditioned for The New Adventures of Winnie the Pooh.

“It was funny because I remember the original audition,” Jim shared about the part he thought he would be offered. “I came home and I called my agent and said I nailed Eeyore.” He was sure he was going to get the part of the downtrodden donkey. “A couple of days later she called me up and said ‘I have bad news, you didn’t get Eeyore… But they did give you a consolation prize.’ I said ‘What’s that?’ ‘Well you're Winnie the Pooh and when Paul Winchell leaves town, you can pitch in as Tigger.’” Jim Cummings shared that Paul Winchell, the original voice of Tigger, was a humanitarian who took frequent trips to Africa so before he officially took over the voice of Tigger, a part he didn’t think he was good at, he swapped in from time to time.

5. A Goofy Movie was special for him because it advanced the characters.

“It was wonderful, Billy [Farmer] and I get along so well. We’re sort of like Abbott and Costello or Laurel and Hardy.” As the voice of Pete the cat, Jim Cummings has spent a lot of time with Bill Farmer over the years, but that’s not why A Goofy Movie was special to him. “It was great to see the characters advance… They were like two sightgag characters… It was great to see them expand.” After working with the characters for so long on Goof Troop, A Goofy Movie was a refreshing experience and Jim Cummings also enjoyed the group recording sessions with Bill Farmer and James Marsden. “I like that more because if you ad lib and I kind of do and they don’t mind it, sometimes it makes the next line make less sense and the other actors like it because they don’t have to come back in to record more lines.”

“My friend, the great Jess Harnell, and I were stunt singers and it was for ‘Hakuna Matata’ and I was Pumbaa and he was Timon, they hadn’t written the entire song yet.” The voice acting friends were brought in to produce a demo for The Lion King as the Elton John/Tim Rice collaboration was still being written. The directors were on hand and the lyrics weren’t exactly what they wanted. That’s when Jim Cummings got very into the character of Pumbaa and began to adlib the entire verse  about how nobody likes to come near him because he’s so gassy. “I’m so proud,” Jim laughed about his uncredited contributions to the song.

7. He got to adlib with Robin Williams even though he never met him.
“I never got to meet the guy but during ADR on [Aladdin and the King of Thieves], there was a scene where Robin Williams goes into a Perry Mason thing and the lines are going back and forth and I came back with an adlib and they went back to Robin and Robin says ‘What’s that you say? I won’t be upstaged by a tertiary character’ and he grabbed the feet and rolled him up… I got completely dissed by Robin Williams and it was great.”

“It’s funny because it just closed, [Illuminations: Reflections of Earth], and that was only in Disney World. I was the shaman sitting around the campfire and that was fun because they played it every night… They wanted it to sound vaguely Native American, like a wiseman who sits up in a cave somewhere. It was the shaman, the benevolent voice of humanity, and I was very honored to do that. I saw it a couple of times, it took me a couple of years but it was just huge…. I hope everybody enjoyed that one because it was a lot of fun.”

“I’ve always had a philosophy that if you don’t do a perfect impression of someone, you have a new voice, and if you have a perfect impression you can do that. They put this together and they said it was a bit of a scoundrel and apparently I give good scoundrel and pirate. He just suited my personality, he was a conman and what a great character. I auditioned for three people and I got the one I want. He was vocally two very famous people pot together… One was Charles Bronson and one was Yule Brenner from The King and I… I put him together and I have Hondo Ohnaka.”

10. He does phone calls as characters for kids in need.

“Disney sanctions this thing and we used to do it live with the great Russi Taylor and Wayne Alwine. This one little girl was 3 and she had cancer, God rest her soul. Someone at Disney set it up and I’ve gotten a lot of these, but this was such a little pumpkin. Her mother says she can’t really talk and she said her name and I sat there and I said [Doing Winnie the Pooh’s voice] ‘Well, it’s me your friend Pooh Bear,’ and we talked for about 5 minutes. Towards the end of it she started going ‘I love you, I love you Winnie the Pooh,’ and she started hugging the phone and I’m a wreck and her mother gets on the phone and is choked up and her mother says she hasn’t been able to speak for 6-months… It was a blessing, I’ve gotten more out of it than anyone.”