Touchstone and Beyond: A History of Disney’s “Dan in Real Life”

This week on ‘Touchstone and Beyond’ enjoy a getaway with the Burns family as they travel to Rhode Island for a family gathering in Dan in Real Life. Sit back relax and you might even shed a tear as Dan learns to survive parenting and rebuild his personal life. 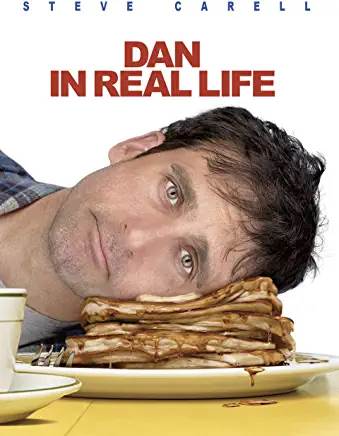 Dan Burns, played by Steve Carrell, is taking his three daughters Cara, Jane, and Lilly to a family reunion in Rhode Island. Dan is a popular advice columnist and since the death of his wife, Dan spends his days either writing or raising his kids. Facing teen struggles of boyfriends and driving lessons, Dan’s parental love is starting to irritate his daughters.

Upon arrival at his mom and dad’s home, Dan is surrounded by his loving family who worry about him. They know that he is struggling to cope, even four years after the death of his wife. Sent out to by some newspapers one morning, Dan meets Marie, played by Juliette Binoche, and they immediately hit it off. Over coffee and a muffin, they talk, and Dan becomes infatuated with Marie. She likes him too. Parting with a promise to call, Dan returns home only to see Marie there, and learns that she is the girlfriend of his brother Mitch, played by Dane Cook.

Overcome with feelings for Marie but not wanting to hurt his brother, Dan spends a lot of the family time trying to avoid Marie and fails miserably. After a talent show, where Dan and Mitch sing a song that shows their love for Marie, she cannot avoid her feelings for Dan and leaves Mitch. While his brother is upset over the breakup, Dan gets a phone call from Marie saying she is still in town, and they meet.

Free from the family, they have a date at the local bowling alley, only to have the family discover their romantic rendezvous. Mitch punches Dan, and Marie leaves for good this time. Encouraged by his kids and parents, Dan sets out to win Marie back and hopefully change the future.

Steve Carrell is fantastic in this film. From the first shot to the last, the viewer meets a guy that is doing his best to be the best dad he can be, while working tirelessly at his job. Dan Burns is the type of guy that the average person would want to be friends with. Not far from the surface, Dan is a grieving husband. Having lost his wife to cancer, Dan is left trying to pick up the pieces of his world that were shattered from her death.

Everyone knows that Dan is hurting, his family, kids, and they all want the best for him. Carrell is so likeable as Dan, but your heart aches for the pain that this guy is hiding inside of him. Between the awkward moments with Marie, the parenting moments with his kids, and the discussions with his parents, Carrell occasionally lets the audience see how hurt Dan is emotionally.

If you are not into schmaltz, then you will want to avoid this movie.

See It! Dan in Real Life is a sweet treat to discover. I remember wanting to see this movie when it came out, but I missed it and forgot about it until now. Sitting through this film, I was amazed at how talented Steve Carrell is. He can blend silly antics with an emotionally broken character that keeps the attention of the audience. Watching this movie, I couldn’t help but feel for the guy and want him to be happy. The film is well balanced with a family that seems normal. They are all caring and loving individuals that go against the normal portrayal in this type of film. Dan in Real Life is balanced with a fine cast, excellent scenery, and a brilliant performance by Steve Carrell.

Next week on ‘Touchstone and Beyond’ we look back at Kevin Costner’s epic western Open Range.