Touchstone and Beyond: A History of Disney’s “Arachnophobia”

‘Touchstone and Beyond’ kicks off it’s second year of reviews with a special look at all things creepy and frightening for October. The format of the column has been updated, including a new Golden Popcorn Bucket rating, but ‘Touchstone and Beyond’ will continue to dive into the vaults and uncover all films from the more adult Walt Disney Pictures labels of the 1980s and 1990s.

Beware of the eight-legged monsters crawling in your house. 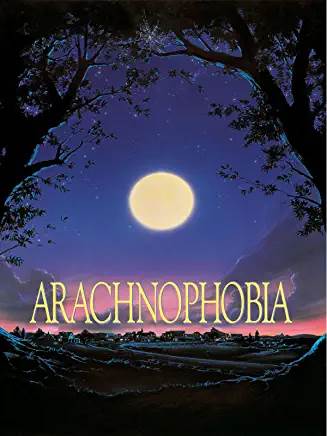 Ross Jennings, played by Jeff Daniels, moves his family from San Francisco to a small town in rural California, only to find his dreams get squished. First the doctor he was supposed to be buying out won’t retire, then the townspeople start dying mysteriously. Jennings learns that he is going to have to shift gears from country doctor to arachnid warrior.

With the help of local exterminator Delbert, played by John Goodman, a specialist in spiders, Dr. Atherton played by Julian Sands, Jennings learns that a rare South American spider has found its way to his hometown, and mated with a local spider.

Now a new breed of killer spiders is picking off the townsfolk. The only way to stop the slaughter is for Jennings to find the nest of the eight-legged murderers. A frantic search of the town reveals to Jennings that the killer spider nest is closer than he thinks.

Jeff Daniels gives his best to play the country doctor turned town savior in this film. Jennings isn’t a fool, but an intelligent rational human being that uses his medical knowledge to question what was happening and then proceeds to bank on his experience as a doctor to discover the truth of what was going on in the town. Daniels plays up his character's fear of spiders well. His portrayal of a childhood phobia feels like the only real aspect of the movie.

John Goodman as Delbert the exterminator is a breath of humor in this film. Delbert is a simple guy who lives in a world where things are black and white. To Delbert, the spiders are a pest and they need to be exterminated. While everyone else in the film is panicking and running around, Delbert is calm and acts like it is a normal day.

Arachnophobia is a pale imitation to another Amblin Entertainment blockbuster, Jaws. From the mild-mannered hero, Jennings/Brody to the local expert Delbert/Hooper to the all-knowing wise character Atherton/Quint, the difference is that the villain in Jaws is frightening while the spiders of Arachnophobia are pests that you can squish with your foot.

The gratuitous shot of the teenaged girl in the shower was NOT needed. While the film doesn’t show her naked, it does broach on the creepy factor that this film could have avoided rather than skirting the edges of a full-frontal shot.

Dr. Atherton played by Julian Sands is a great character who has nothing to contribute but exposition. It felt unnecessary to bring Dr. Atherton back for the climax of the film. He really didn’t contribute much to the story.

The spiders are not scary. While some of the jump scares are effective, (they even startled me), the plot of the dangerous super spiders was more schlock then shock.

I remember when the movie was released, and I didn’t know what to make of it as a ten-year-old. I never did see the film at the theatres and now that I have finally had the chance to watch this thrill-omedy, I’m perplexed at the goal of the movie. How do you have a film that has so many people die in it, (12 shown on screen) and yet make it a comedy? If a movie is meant to be an homage to Jaws and The Birds, should it be part comedy? What startles me the most is the praise the critics gave this film. Arachnophobia got two thumbs up from critics Gene Siskel and Roger Ebert.

I feel like I wasted my time. Arachnophobia didn’t scare me, nor did I feel compelled to like any of the characters, except for Delbert. The movie isn’t terrible, it’s just not that great.

Arachnophobia gets a 1 Golden Popcorn Bucket rating. If there’s nothing else on one of the many streaming services you have, enjoy, but look hard for something else first.

Next week on ‘Touchstone and Beyond’ we continue our journey of ‘October Frights’ with The Sixth Sense. Does the M. Night Shyamalan film still hold up? Or has the power of The Sixth Sense been lost over time?